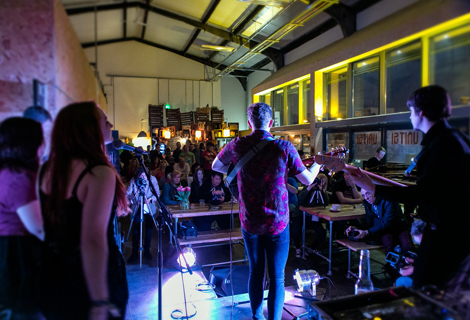 Dominic Dunn returns to Threshold and Unit 51 in 2015

Ahead of their biggest year yet, the Threshold team put together their ultimate festival routeplanner to help you lay out your Baltic Triangle gameplan.

As we creep closer and closer to the first big festival weekend of the year Getintothis has been getting the lowdown on what we can expect from the fifth and biggest offering yet from those lovely folks over at Threshold Festival.

Bringing together a diverse wealth of grassroots music and art from across the region, Threshold prides itself on being a festival for artists, by artists, so we asked the team about the unmissable acts they’re most looking forward to this year.

“Personally I’m very excited for Monster Sound Collective at Blade Factory on Saturday 28. Their 3 stage Battle of the Bands set up is going to be unique to Liverpool with some of the best up and coming post-rock and math from (ATLAS), Taws, Singapore Strategy and more.” Director Chris Carney tells us, “We’re always represented the post-rock genre at Threshold since the very first year with acts such as Minion TV, Cleft, Alright The Captain and Kasanagi so it’s great to see some of the new breed geeks.”

For Operations Director Andy Minnis the highlights of the festival are to be found on the Rubber Factory stage at Liverpool Craft Beer Space. “It’s the first time this building has been used for a gig so it’ll be great to showcase a fascinating building before it gets polished up and opened to the public. We’re always put on gigs unusual spaces for Threshold and this year is no exception.”

“I’m also excited to see a full day of music at The Observatory on Saturday with out partners at Soul Inspired Events giving us a taste of what’s to come at Liverpool Soul Fest later this year.”Andy also assures us that something to check out across the weekend is the Evolution of the Groove: “twelve house of DJ sets over three days exploring genres from jazz to funk, to disco and deep house, hip hop and breaks with some of the best in the business. It’s going to be epic!”