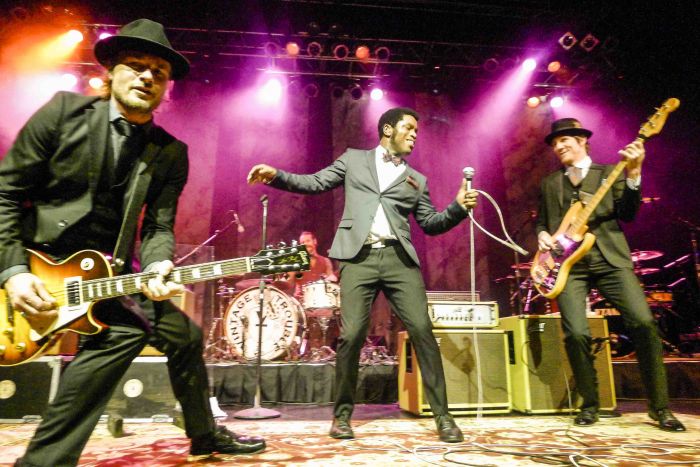 With perhaps the greatest marriage of rock and soul in modern times, Getintothis’ Shaun Ponsonby experiences a sweaty night in Manchester

Vintage Trouble have been around for around half a decade now. Their following seems to grow and grow, but they have only one full length album to their name, 2011’s The Bomb Shelter Sessions.

So, how have they gained such momentum? The answer is simple: they absolutely kill it live.

They are perhaps the greatest marriage of rock & soul in modern times. For a band to make their reputation almost purely on the live circuit in this day and age is pretty rare, so that should tell you what you’re in for when you go see them.

In Manchester tonight, they have opted to play with American DJ Papa Ray in lieu of a support band. This actually sets the tone well for the evening, as a 75 minute set from Ray spinning classic and obscure soul, blues, reggae and funk 7” records (“an old music file storage system”) probably chimes better with the band‘s philosophy than a local support band would.

When the band finally take to the stage, it is immediately clear who the star of the show is. Looking immaculate, Ty Taylor may be the most engaging frontman out there today. Although clearly cut from the same cloth as the James Browns and Otis Reddings from days of yore both vocally and in presentation (we weren’t surprised to learn he has gospel roots himself), he is absolutely his own identity. He is also infectious. You get caught up in his enthusiasm. And when he says “dance”, you dance. When he says “sing” you sing. You free your mind, and, indeed, your ass does follow.

It’s actually refreshing. Most of the bands this writer has seen as of late have often been too cool for school, so wrapped up in being serious musicians that they forget to enjoy themselves up there. If the band aren’t enjoying themselves, why the fuck should the audience? There is absolutely no fear of that tonight. There’s nothing cooler in this world than having a good time.

Several times during the show, Taylor jumps off stage and begins singing and dancing with the audience. During Strike Your Light, he manages to make it to the very back of the room and begins performing on to of the sound desk, with every member of the assembled still absolutely obeying his every whim.

But that’s not to diminish the rest of the band. It’s not all show here. They are solid. And although essentially playing soul music, they play it through the set up of a rock & roll band. This means that something like Pelvis Pusher, which is fundamentally a deep, grooving southern soul romp, finds a unique sound through the amplifiers.

Although critically acclaimed, they are still very much a people’s band, and this is made obvious by their decision to leave the stage not be heading backstage, but rather by jumping off the front of the stage and making their way through the crowd, directly to the merchandise stand to meet and greet.

A great band is one that you can go and see, and when in it’s all over, you turn around and exclaim: “I want to be in a band like THAT!” Vintage Trouble are one of those. It was a sweat dripping off the walls kind of night.

They’re finally releasing their second album in the summer. Keep an eye on it. They’ll be back.