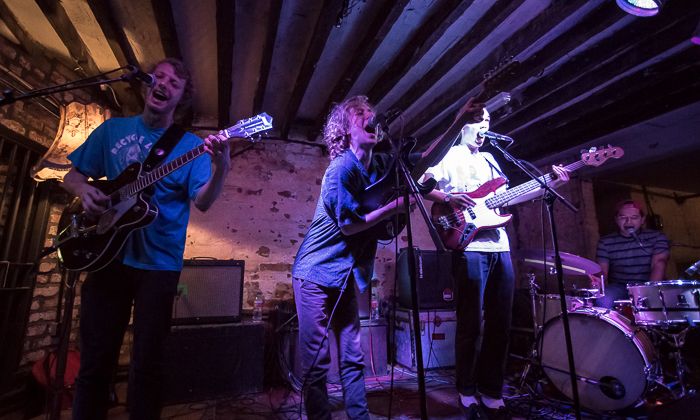 With his thesaurus opened at “frenetic”, Getintothis’ James Sullivan catches a band with a tangible sense of something happening.

“The last time we played in Manchester, there were about ten people there”, beams singer/drummer/producer Tarek Musa to a packed room upstairs at Gullivers. He’s ready to start: regulation red cap in place, foreign exchange student backpack resting on the floor behind the drum stool.

There’s a tangible sense of something happening around Spring King, but it doesn’t seem to have affected the way they go about their business. They set up their instruments on stage and chit-chat with each other. Ponytailed bassist James Green digs around in his wallet for a plectrum, woolly-haired guitarists Pete Darlington and Andy Morton stare at each other, waiting.

And then, all of a sudden, they’re off.

It’s hard to write about Spring King without having a thesaurus open at the word ‘frenetic’. The nine songs tonight are all paced somewhere between quickfire and frenzied.

The band tear into second song Can I?, all ‘’woah-oh-oh’’ harmonies and scuzzed-up chords. There’s something of the Arcade Fire in the chorus, only sped up and compressed into bitesized chunks.

Likewise with early single Mumma, played at roughly twice the speed of the recorded version. Like most of their songs, there’s an American garagey powerpop thing going on: one-line choruses chanted in unison, surf rhythms, not a bass note wasted. Like Jay Reatard at his most poppy.

It’s easy to get swept up in it all. Since their last Manchester headline show, they’ve been to South by Southwest, toured with the likes of Circa Waves and Courtney Barnett, and had their single City played all over the radio. “Oh fucking hell, yeah!”, Musa exclaims at the cheers it receives.

He’s an incredibly affable presence and the gig flies by. Two minutes of jet-packed, buzzsaw guitar pop followed by thirty seconds of wide-eyed appreciation for everyone turning up, and repeat.

In All This Muck and Dirt – from the new EP They’re Coming After You – is the only slight let-up in pace. But even that builds to a climax Ricky Wilson has been faking for the last ten years.

They end with V-V-V-Vampire amidst shouts for more from the crowd. “We don’t have any more”, they plead. We somehow doubt that.