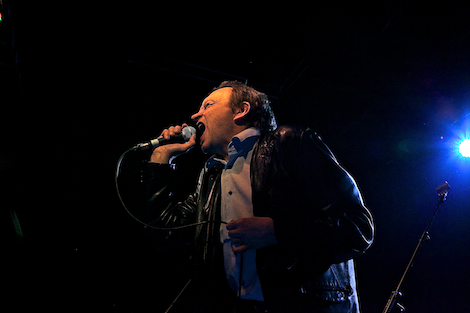 As The Fall unleash their umpteenth album, supported by a first and last visit to The Kazimier, Getintothis’ Will Neville digs through their myriad of releases to select their ten greatest tracks.

The Fall were formed by the curmudgeonly Mark E. Smith in Prestwich in 1976 and have been through so many members that there is a very fine book (The Fallen by Dave Simpson) dedicated to tracking them all down and hearing their stories.

Sub-Lingual Tablet, out this month, is their thirtieth full-length studio-only release, to which can be added numerous mini and half-live/half-studio albums, and nearly as many live albums as The Grateful Dead.

MES is the only surviving member of the original group, currently joined by his latest wife Eleni Poulou on keyboards, bassist Dave Spurr, Pete Greenway on guitar and two drummers – Keiron Melling and Daren Garratt.

It is practically impossible to narrow down to just ten tracks a band who were once well described by the late, great John Peel as “always different, always the same”. However, this list provides a sampling from across their career. Once you have the bug, you’ll never look back.

It must be doubtful whether many people were prompted to buy a Vauxhall Corsa as a result of this song being used in the advert, but this is one of The Fall’s catchiest numbers of the last twenty years. The riff is a classic Fall one, with a typically strong undulating bassline underneath.

The album was recorded straight after the US tour that resulted in MES being arrested after an on-stage fight that led to all but one other member of the group quitting, so The Marshall Suite was recorded with yet another new band line-up.

This mid-period classic album on Beggars Banquet features a tribute to Can’s legendarily oddball Japanese lead singer from the early 1970’s. Its riff and drum pattern are both inspired by different Can numbers.

The pounding drums from Karl Burns drive the song along, showing that second drummer Paul Hanley, who left prior to this album, was not greatly missed.

The perfect encapsulation of The Fall’s raison d’être. Which is an entirely un-Fall-like sentence.

This is the B-side of their debut release, by which time they were already onto at least their second drummer, with bassist Tony Friel departing after this e.p. to be replaced by current BBC 6 Music DJ Marc Riley. Martin Bramah’s simple descending guitar riff is of a piece with Buzzcocks’ Boredom solo by Pete Shelley from 1977.

Something of a period piece with its references to Jimmy Hill and Bert Millichip in a typically off-kilter, dense-sounding rant about the FA and the state of football in the 1980’s, with wonderfully wobbly backing vocals in the chorus. The Fall returned to a football theme with the better-known Theme From Sparta F.C. in 2006.

This hit #5 in the indie charts and was promoted by a suitably cheap-looking video largely filmed at Burnley’s Turf Moor ground.

This track driven by American keyboardist Marcia Schofield was the only Fall song to top John Peel’s Festive Fifty. It featured on the first album after Brix E. Smith’s departure from the band, following her divorce from MES. It was originally written by MES and guitarist Craig Scanlon as a parody of The Smiths, but the lyrics then ensured it became something much deeper and richer, possibly even a love song. One of the most straightforward, seemingly heartfelt set of words to any Fall song.

The video was featured on Snub TV. Those were the days when the only hope of seeing a non-mainstream act on the TV was in the indie run-down on The Chart Show or this short-lived, much-loved BBC2 show.

One of many highlights of this writer’s personal favourite Fall album, this nearly eight-minute epic was used in the background towards the end of the film The Silence Of The Lambs, with its creepy tone fitting the scene well.

It contains some of Smith’s most iconic, self-referential refrains in “he is not appreciated” and “all the young groups know they can imitate, but I teach”.

A fine example of the band’s harsh repetition from their first Top 20 album, at a time when they were occasionally troubling the lower reaches of the singles charts with cover versions. This is the seven-minute version, one of several released in the days when multiple versions of tracks were spread across different formats in an attempt to boost total sales.

Although this song features on their debut album Live At The Witch Trials, to these ears the Peel Session version is superior. It’s a fine example of Mark E. Smith at his yelping best.

The lyrics apparently refer to an early Fall associate who succumbed to heroin (hence the weak pun on junky in the song title).

A cover of a forgotten 60’s psych tune (originally by The Other Half) that featured on one of the many Nuggets compilations. The Fall’s driving version hit the heady heights of #75 on the main UK singles chart.

This is the one song guaranteed to get this writer onto the dancefloor if ever spun by a DJ, regardless of whether anyone else is also out there, something many so-called friends have taken advantage of over the years in clubs, at weddings, or anywhere remotely embarrassing.

This writer’s personal favourite Fall song of all time, and presumably John Peel’s as he selected it as one of his Desert Island Discs. Another epic, although this time only just over six minutes.

This tale of being thrown out of a heavy metal club for being too smart mutates into a study of the then-modern technologies of computers and video recorders. The video is hilarious as well, including some top dancing by both Mark E. Smith and new bride Brix.

The Fall make their Kazimier debut on May 13 with tickets available here.