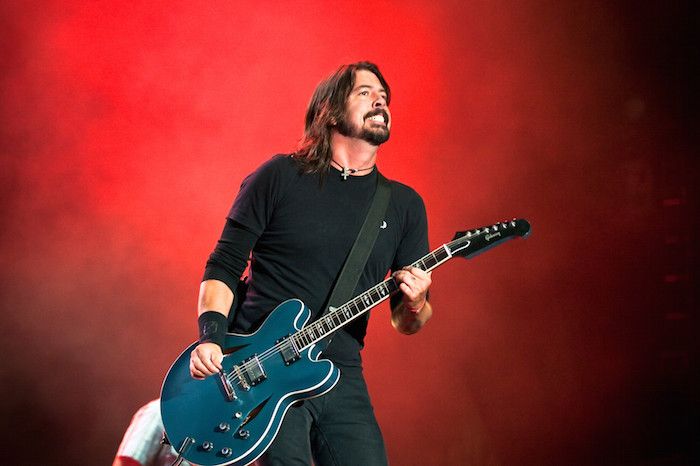 Foo Fighters haven’t done a proper UK tour since 2008, but that sounds a little misleading, as they’ve been pretty ubiquitous anyway. Playing just about every major festival (often several times), and headlining one-off shows at massive venues such as Milton Keynes Bowl (where this writer saw them jam with Alice Cooper, Husker Du’s Bob Mould and Queen’s Roger Taylor), it isn’t as if there hasn’t been ample opportunity to see them.

So, we can’t say it felt like there was any more anticipation than usual in the air, although the Manchester afternoon rain could be partially responsible for that.

Still, Foos are an astonishingly reliable live act. Dave Grohl – the nicest man in the world to everyone but Courtney Love – has that Bruce Springsteen quality. You just want to be that guy’s drinking buddy. He is completely entertaining, but completely unpretentious, so watching him onstage is always a pleasure.

There doesn’t appear to be much waiting around. It seems that as soon as the stage is ready, the band just burst on without warning, Grohl mugging for the audience before diving into a trio of their biggest and most recognisable hits; Everlong, Monkey Wrench and Learn To Fly, three songs that anyone who spent their teenage years in front of MTV2 and Scuzz know like the back of their hand.

It set a precedent for the night. Only about three tracks from current album Sonic Highways were actually aired, for the rest of the night it seemed like the boys were intent on bringing the party to town, with hits and fan favourites being the order of the day.

Not that this didn’t leave room for surprises. At times it seemed like Grohl was changing the setlist as he went. In particular, White Limo was played after what seemed like a brief bit of confusion on stage.

Later on, he pretty much confirms it, saying that he changed the show as he was informed that he couldn’t use the b-stage due to the rain. But by now, “it’s a beautiful night”, so he made his way out to the end of the runway for a mini-acoustic set.

After a duet with an 8 year old kid called Frankie (who appeared to be a scouser, by the by) on Times Like These, the band appeared from beneath the runway to play a mini-set of covers, namely The Faces’ Stay With Me, AC/DC’s Let There Be Rock and Queen and David Bowie’s Under Pressure.

It’s at this point – and considering a blast of Van Halen’s I’m The One earlier in the evening – where the reason Foo Fighters truly stand out becomes apparent, and it’s not necessarily the material. Sure, their songs are good, but a lot of bands who aren’t that big have songs that are just as good. The major difference is something that so many rock & roll bands since the advent of grunge forget; enjoy yourself. Not once do you ever doubt that they are having the time of their lives up there, and when that is the case, it’s nigh on impossible not to fall into it.

Think about it logically. Metallica are probably the biggest metal band in the world, and it is arguably their enthusiasm that carries their live show. That is what won over the Glastonbury masses last summer. The Darkness’ humungous, but brief, breakthrough last decade came around during a spate of dull bands fronted by charisma vacuums. What all this has in common is that none of these people are ashamed of the fact that they are still fans themselves. We can all relate to that.

To labour this point, the band don’t bother doing the old encore trick (a growing trend, it seems), instead they opt not to waste time and just play straight up to the curfew with a predictably rousing Best of You, and leave the stage, leaving the audience brimming. That was a quick two and a half hours.