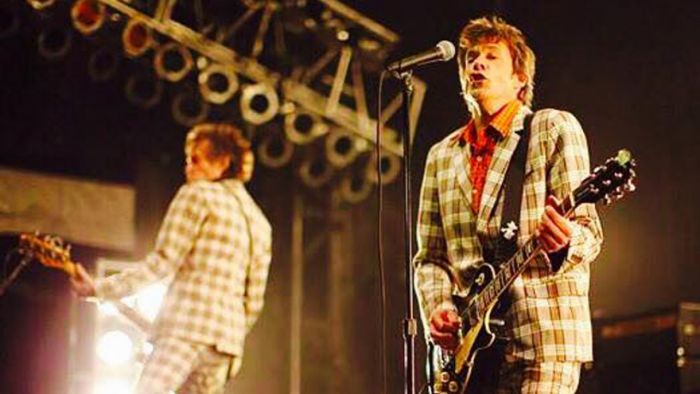 As The Replacements seemingly break-up on stage (again) in Portugal, Getintothis’ Shaun Ponsonby reports from London for the band’s first, and maybe last reunion shows in the UK.

Of all the reunions we have been seeing as of late, The Replacements’ has been the most unexpected, and unorthodox. Firstly, it was for the money, but not in the way you might expect.

They initially reformed in 2012 to record Song For Slim, an EP they released to help pay medical bills for former guitar player Slim Dunlap who had suffered a severe stroke. The EP was nothing all that special, a typical ramshackle Replacements affair; a series of bizarre covers, including Hank Williams’ Lost Highway and Ethel Murman’s (!) Everything ‘s Coming Up Roses.

They then started playing live. In the past, the band were known for being a wayward and unpredictable live act. It wasn’t unusual for them to show up drunk and play a set that consisted purely of half-arsed cover versions (many of which would be abandoned halfway through the tune). In 1985, a bootleg confiscated from an audience member  was released as The Shit Hits The Fans. This is a pretty typical representation. Not only is the recording light on ‘Mats songs – out of 24 songs on the disc, only 5 are original compositions, and 2 of those were as yet unreleased – but at one point in Hear You Been To College, frontman Paul Westerberg accidentally hit the record button on the master copy and you can hear him mumble something inaudible on the tour bus.

But it became part of their legend. If you said “I saw The Replacements last night”, people would lean in and ask, with genuine curiosity; “what happened?”

However, their reunion shows at Riot Fest were surprisingly stable. They followed it up with slightly more unpredictable shows at Coachella 2014 (including one set where Westerberg laid horizontally on a couch for 80% of the set and instead allowed Green Day’s Billy Joe Armstrong to take the lead) and a sold out homecoming show at Minneapolis’ Midway Stadium.

And now, finally, a full tour – typically titled with the self-deprecating moniker Back By Unpopular Demand –that saw the band play a handful of shows in Europe for the first time. But even that hasn’t been straight forward. Despite reportedly recording new material, it seems that the reunion is over just as it was getting going, and that Westerberg at least knew this was going to be the case before it even began.

As internet-based eagle eyes have noted, Westerberg has been wearing an array of T-shirts throughout the tour that, as it wore on, spelled out a message; “I have always loved you. Now I must whore my past”. At the tours’ final stop in Portugal, he announced from the stage that the audience had witnessed the final Replacements show, that the band stayed at the hotel rather than soundchecking the show (“lazy bastards to the end“, he said on stage), before smashing his guitar.

For the record, this is the second time The Replacements have broken up on stage. The first time, in 1991, they were gradually “replaced” during the set by their own roadies.

It’s a shame. Because this writer witnessed the band’s London return, and it was nothing short of incredible.

The Roundhouse was completely sold out, sets from Jesse Malin and You Am I went down well enough, but more than usual, it felt like they were tolerated rather than enjoyed. The only thing standing in the way of us and The Replacements at that moment.

There were a few people knocking about from bands we were fans of. For this writer, the most notable being a couple of members of Sharks, a band that had it in them to lend a voice to a disenfranchised generation before they split just as the ‘Mats were reforming.

The gap between the support slots was miniscule, and there was a sense of disbelief in the air as the band took to the stage at 9.10pm. The mere sight of Westerberg and bass player Tommy Stinson together again was enough to send the crowd into overdrive, with a palpable sense of “we can’t believe we’re seeing this”.

But at this point, we still didn’t know what version of The Replacements we were going to see. Would they be a professional, well-honed machine, or a covers-heavy, sloppy mess?

We got the best of both worlds.

They kicked off by showing their hardcore punk credentials. Takin’ a Ride, the first track on debut album Sorry Ma, Forgot To Take Out The Trash led into their debut single, I’m In Trouble, followed by Let It Be’s Favourite Thing and Tommy Gets His Tonsils Out.

After that breakneck introductory blast, they were able to play some of their more melodic work, such as Pleased To Meet Me’s Valentine and Tim’s tongue-in-cheek Waitress In The Sky, a sly dig at a flight attendant who thinks she’s all that (“strutting up the aisle/big deal you get to fly/you ain’t nothing but a waitress in the sky”).

As solid as the band were throughout, there was enough of classic Replacements hi-jinx to satisfy too. Early in the set, the aforementioned Lost Highway was given a try. “Try” being the operative word. Westerberg broke into a fit of giggles and forgot the words, meaning the band had to stop for a minute to let him regain his composure.

At one point, Westerberg turned to Stinson, and started pushing him away…and he just kept going until eventually they were both off stage.

Westerberg also asked the crowd for requests several times, at one point joking that he was waiting for someone to shout out something that is already on his list and started, but abandoned, Ye Sleeping Knights of Jesus (“you can’t expect us to remember everything we ever did!”)

What stuck most, though, was how well the band’s material stands up thirty years later. They are possibly the ultimate band for misfits. Androgynous – a particular highlight on the night – was recently covered by Against Me!’s transgender frontwoman Laura Jane Garce, along with Miley Cyrus and Joan Jett. How ahead of its time is a song from 1984 that is essentially a pro-transgender lyric? “Mirror image/see no damage/see no evil at all/kewpie dolls and urine stalls/will be laughed at the way you’re laughed at now”, especially given the recent events of Grace and especially Catlin Jenner.

Earlier in the tour, the ‘Mats were playing Androgynous at the same time as Seen Your Video (i.e. Stinson and drummer John Freese played the latter whilst Westerberg and guitarist Dave Minehan played and sang the former…it sounded about as you think!). A day or so after Jenner’s picture was released, for them to play the song properly seemed to be appropriate on a humanist level.

The end of the set naturally featured the big guns; Can’t Hardly Wait, Bastards of Young, Left of the Dial and Alex Chilton with a random verse of My Boy Lollipop thrown in for shits and giggles. It seemed like every member of the London crowd was singing every lyric. Word for word.

Its these songs that sum up the appeal of The Replacements and Westerberg’s songwriting. Sure, the characters in the songs experience a Cobain-level of alienation, but unlike Cobain never lose their sense of fun. Lyrics with witticisms like “Jesus rides beside me, he never buys any smokes” in Can’t Hardly Wait, or the celebratory cry of “we are the sons of no-one” in Bastards of Young, or the importance of music in our lives with the line “I’m in love, what’s that song?” in Alex Chilton and the entire lyric in Left of the Dial. It’s not nostalgia. This stuff never leaves you. We don’t hear this and remember days of yore, we’re feeling this RIGHT. NOW.

The encore began with Westerberg playing obscure b-side If Only You Were Lonely solo before gradually being joined by the rest of the band. Unsatisfied made Mick Jagger sound like he always had satisfaction.

Never Mind – which gave Nirvana the title for the humungous album they released just as The Replacements called it a day – and surprisingly heavy IOU were to be the final songs of the night. Stinson left the stage almost immediately, believing his work is done.

But Westerberg wasn’t through. What makes his ambivalence towards the tour and seeming break up announcement surprising is that he genuinely seemed to be having fun on stage. He called Stinson back to play another song, and when he didn’t immediately return, he told his bass tech to “just play A and jump around a bit”. When Stinson did return they played The Only Ones’ Another Girl, Another Planet, which was both solid and ramshackle in equal measure. Then they left without fanfare. No group hug, no bows. Just a quick, unpretentious “good night”. And they were gone. Not once even considering that what had just been seen may have had a profound effect on us.

Really, it was a perfectly imperfect night. Euphoric, cathartic and hilarious. If this is the end of the road, it was the perfect way to go out. Re-claiming your legend and reminding people that behind it was probably the most important alternative rock band of all time, with some of the greatest songs ever written.

We imagine that Stinson will likely return to Guns N Roses, where he has been since the late 1990’s (likely a better payday that what he gets with the ‘Mats). Westerberg is less concrete. His entire career has had twists and turns, from his soundtrack compositions, to albums like Folker, 49-minute singular tracks that are mere streams of consciousness and his bizarre alter ego Grandpaboy.

Maybe quitting now is a good thing. It’s a very Replacements thing to do.