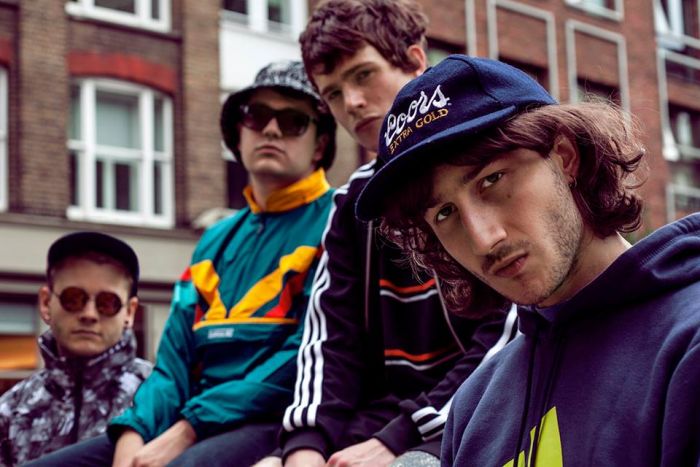 Sporting B-movie masks in Didsbury basements and playing live alongside a sex doll called Ivor, Getintothis’ James Sullivan invites you to step into the sleazy world of Manchester’s Flesh.

If you haven’t yet heard of Manchester four-piece Flesh, then their latest video W8 4 Me is the perfect place to start.

The self-proclaimed “snotpop” band have been making waves in the city for a while now, popping up all over the place – like at the recent Dot to Dot Festival and a three night stint supporting Peace at the Deaf Institute.

The new video would be nightmarish if it wasn’t done with such joy. A dingy basement, B-movie masks, rotting flesh on dank mattresses and random acts of violence: it’s Slipknot’s Spit It Out video but set in Didsbury.

Flesh gigs involve sweat, Kappa tracksuits and a sex doll called Ivor, while singer Robbie slouches and drawls three-minute grotty pop anthems into his mic. It’s as sleazy as Jane’s Addiction, as catchy as Weezer, and as Manc as a barmcake.

Although W8 4 Me is a little darker than their previous videos for Avin It in Ibiza and Vauxhall Casanova, the song is full of the same washed-out guitars, lurching harmonies and shout-along choruses. It also pulls off that brilliant trick of seeming lazy and urgent at the same time. If King Adora had whacked on some trackie bottoms and moved to Seattle in the early 90s, they might’ve sounded a bit like Flesh.

They’ve promised a load more gigs and some big announcements by the end of the year. For now, there are a bunch of tracks on their Soundcloud page which they’ve urged everyone to steal.

Coming to a venue near you soon, make sure to grab your own pound of Flesh.