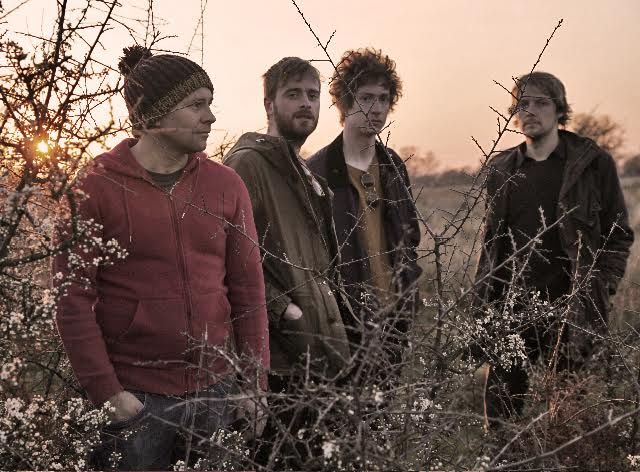 As the band release a second album forged in nature, Getintothis’ Gregory Topalian reintroduces us to the Welsh mountain men.

It seems strange for Getintothis to be writing an ‘Introducing…’ piece about a band that released its first album in 2007 but Dilwyn Llwyd and his band have created a work of wonder from somewhere that isn’t here and as such Yucatan deserve to be reintroduced. Uwch Gopa’r Mynydd is only their second album. Music like this takes time to gestate.

First things first, let’s get the Sigur Ros comparisons out of the way. If you like the Icelandic sound-scapes created by the Reykjavík collective, you will also like this. Both Yucatan and Sigur Ros create music forged in nature, and neither band sings in English.

However the lazy comparisons stop there. Yucatan are a different animal entirely and the ghosts of Welsh music past and present flutter all over the ether. Towns and cities of Wales have generally produced bands that reflect the hustle and bustle of town and city life; their energy and vibrancy either fiercely loyal to their roots or desperate for escape, driven with anger in the face of the country’s lot at the hands of Westminster and beyond.

Meanwhile the fringes of Wales; the coastal corners, depopulated villages and isolated inland refuges witness the creation of music of an entirely different bent. Songs like Long Gone, Mountain People and Hometown Unicorn by the Super Furry Animals belie the media’s belief that the SFA are a Cardiff band. Three of that collective hail from the peaceful and sheltered extremes of North Wales and their more beautifully wistful musings reflect this.

Gorky’s Zygotic Mynci’s more contemplative moments echo the Camarthen sounds of oceans and seabirds while it’s not a huge stretch of the imagination to hear the wonderful and criminally neglected Zabrinski‘s Seal My Cave on Yucatan’s Uwch Gopa’r Mynydd. The poetic beauty that Meic Stevens whispered out into the coastal air of Solva and beyond and the ’fuck you we’ll do things our way’ majesty of Datblygu also touch upon Yucatan’s sound.

Yucatan hail from Bethesda in the Snowdonian mountains, a town that previously gave us Gruff Rhys and Y Niwl. Dwarfed by those majestic giants of rock, it should be no surprise that Yucatan’s sound reflects the awe those mountains inspire.

Uwch Copa’r Mynydd is one of those albums that exudes attention to detail. There are mysterious sounds that punctuate the songs and then flee as quickly as they came, yet all feel just perfectly placed. Getintothis remembers exactly where we were when we first heard the magical Holes by Mercury Rev, being dazzled by its other-worldly weirdness, and we felt the same when we first heard Angharad by Yucatan (more of which later). This isn’t cheap music churned out to sell. It is crafted.

Hydref is mentioned on more than one occasion on Uwch Copa’r Mynydd and that is the setting for this album. It is autumn, and the ever changing elements of Snowdonia are in full flow. Imagine yourself at the foot of a peak, glazed in the early snow of the late months. Put in your headphones and be astonished as you start your climb.

Ffin (translation: Border) is opened with Joy Division Atmosphere drums, church organ and fragile vocals. The light touch strolls along, slipping in and out of the peaks. At two minutes it goes all sparse and then the explosion…and by now you will know the Yucatan.

If you are as thrilled as we were by the first three minutes of this album, then you are in for a treat. Throbbing guitars and strings interplay mischievously over the ever insistent drums. Brass enters the fray ninety seconds later, helping to create the maelstrom that is a raging storm before all turns back to calm. Ffin is a sumptuous introduction to the album.

The nursery rhyme simplicity that starts Cwm Llwm (Bleak Valley) is a pretty and gentle welcome that just breathes in the warm crisp glow of October’s disappearing sun. There are gaps in the music that make the listener wait and wonder…then more of the same. Will the storm return? Not yet, they tease. A barely perceptible crescendo rises to a cautious euphoria as strings from the Megan Childs songbook swarm over the closing bars before seguing into a peaceful lull.

Word Song is the only English entry on the album, not that it matters as this is music that you just allow to seep into your pores. Something backwards and mysterious accompanies a Polyphonic Spree fluted gentle guitar, again nursery-like in its innocent simplicity, before the real song washes in on a dream of cymbals and melodies Instruments appear and disappear from earshot, saturated with heavenly backing vocals. The instrumentation is simply gorgeous on Word Song with the return of shimmering guitars and backwards sounds completing the circle.

Halen Daear a Swn y Mor gently arrives on a bed of monk-like distant chanting, superseded by a plaintive piano and striving drums that encourage this musical representation of crashing waves to their shore. The jaunty brass makes this the most conventional song on the album, yet remaining spectacularly unconventional. Pretty, spacey lyrics ebb and flow before Halen Daear a Swn y Mor’s dramatic curtailing.

Ochenaid (translation: Sigh) is a real stand out track. God knows what it starts with, but whatever it is it finds itself accompanied by communications with the stars. Trance like drums and striking guitar (think The Edge…but only briefly, it’s not good for your health) puncture the conventional song below, adding colour to the flowing rush of the soothing refrain that floats the sigh home.

The echoing sounds rising from Peace Lake sees Llyn Tawelwch emerge from the depths. Vocals take hold in the lonely introduction but once it hits its stride you really feel that you are doing the album a disservice by listening indoors. Sitting under the stars; around a fire, drinking in the rugged nature that forged these songs would be far more suitable to fully appreciate that there is some quite marvellous music in these mountains.

Angharad, meaning much loved one, is a relatively common name in Wales with its roots founded in The Mabinogion, a literary and legendary relic of Welsh history. The song works like a mantra, the reel of music/lyrics is hypnotic and for anyone wanting their imagination stimulated, just watch the official video. It is a beautiful piece of film, which when allied with the music imbues it with a sense of mystery and a hint of underlying menace. The huge sigh at the end is astonishing.

Everything has been leading up to this. Title track Uwch Gopa’r Mynyndd (translation: highest mountain peak) is a massive song that ambles in to view with a distorted fairground waltzer lilt, fragile vocals and some lazy country strummin’ n’ drummin’ all helping to clear the clouds. We are almost there. We are looking up in awe at the peaked majesty almost conquered as swooping strings dive and rise through the recently washed valley below.

Uwch Gopa’r Mynyndd offers a real stab of excitement when the ‘wow’ moment arrives; everything that has gone into crafting this lovely album appears to have been given flight as the literal musical and metaphorical mountain peak is reached. Boo Radleys/bravecaptain/Martin Carr inspired brass infiltrates a majestic final act, hovering over a cacophony of splendour that triumphantly brings this particular journey to an end.

Yucatan’s Uwch Gopa’r Mynyndd is unique in these isles. No-one else is making music like this in Britain in 2015. This is music made by music (and nature) lovers and it is a poem of love to the harsh environment that moulded it. Yucatan have produced an album that has enough going on throughout  to keep you discovering new wonder on every rewarding listen and it can only be hoped it gets the non Welsh-speaking attention it deserves.