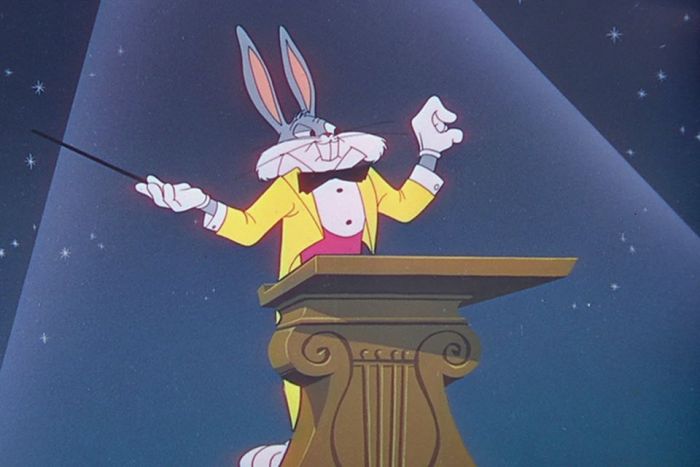 The finest rabbit the world has ever known

Getting distracted whilst looking for music news to waffle about, Getintothis’ Shaun Ponsonby instead celebrates the birthday on the world’s greatest rabbit.

I think we can pretty much establish that I quite like cartoons.

Earlier this week I dug out my Hanna-Barbera box set and watched Dastardly and Muttley in Their Flying Machines, and just marvelled at how unrealistic the standard the man and his dog set when it came to stopping that bloody pigeon. Over-confidence can be a hindrance, as I’m sure Kanye West’s PR people would tell you.

A day later I logged into all my social media nonsense, ready to look for some music news that could possibly fill this space with my ramblings attached to it, and found Bugs Bunny trending. It appears that Monday (27th July) was the 75th anniversary of his debut cartoon, A Wild Hare. That’s incredible. Think about that. As much as we grew up watching Bugs Bunny, your parents and your grandparents also grew up watching Bugs Bunny. And he still represents everything now that he did when he first came along.

In a way, Bugs is to Warner Bros what Mickey Mouse is to Disney. Except Bugs still has character. Mickey was always kind of boring in comparison. He’s just a goody two shoes to set a good example for the kids. It was the characters around Mickey that were funny. Mickey, in fact, doesn’t really have a character left. When you see Mickey Mouse, your first thought isn’t of his character, but instead of the large Disney corporation, so closely is he related to all their uber-capitalist shenanigans.

But Bugs hasn’t been tainted in the same way. Despite his close links to the corporation. Despite those Nike and Weetabix adverts. Despite Space Jam (even as a kid I thought it was boring, as was R. Kelly‘s awful song on the soundtrack about having faith in his ability to aviate, which he pondered nocturnally and diurnally). When you see Bugs, you still think of his character first. You think of him out-smarting Elmer J. Fudd, failing to take that left turn at Albuquerque and being an all-around “stinker”.

Because we watched these cartoon shorts as kids – and given that most kids TV is animated – we tend to reach a point where we grow out of them and stop watching. But many of the cartoons in the Golden Age of Animation (which lasted until the late 60s) weren’t made for children, they were made for adult audiences as pre-shows for the features at the cinema showings. That’s why the uncut cartoons, which rarely – if ever – get shown on TV these days, feature so much madcap suicide attempts. That’s why they were able to parody classic operas in films like What’s Opera, Doc? and The Rabbit of Seville. A lot of the material in a Looney Tunes cartoon is just plain old vaudeville.

As a kid I’d watch the cartoons and laugh hardest at the slapstick. Today I see them and find the real humour is in the build-up to the slapstick. It’s the dialogue and anticipation.

Bugs wasn’t Looney Tunes’ first attempt at a signature character. There was Porky Pig, Daffy Duck and Bosco (their first success) before him. But Bugs has endured. The reason is probably because we’d all like to be a bit more like Bugs. We’d like to stay cool in dangerous situations, we’d like to think on our feet, the ability to do anything and go anywhere. Bugs is never the antagonist in the situation. He’s not the bully. He only ever responds to the bully (usually Elmer or Yosemite Sam).

Sadly, we probably find ourselves having more in common with Daffy; bitter, spiteful, never quite achieving what he believes he is capable of, not cool, nothing ever quite working out, but soldiering on anyway.

Even though everything works for Bugs, we never dislike him. That’s hard to achieve. In contrast to James Bond, who I essentially attribute longevity to purely due to the fact that with his cars, girls, nice suits and gadgets he amounts to the ultimate hollow adolescent male fantasy (I don’t like James Bond, just on the off-chance any clarification was needed), I’ve never looked disapprovingly at Bugs or thought he was a smarmy git.

So, I think it’s worth celebrating 75 years of the greatest rabbit of all time. Fuck you, Easter Bunny. Bugs all the way. Happy bloody birthday, you scwewy wabbit! The great thing about being a pensioned rabbit is that you can get your bus pass. Maybe now you’ll stop getting lost at Albuquerque.

It was a pretty boring week for music news, so I’ll forego any and all Newsbites this week, if its all the same. If you’ve got a problem with that, by all means email me at idontcare@yeahjusttryandfindmeontheinternetyoutool.com