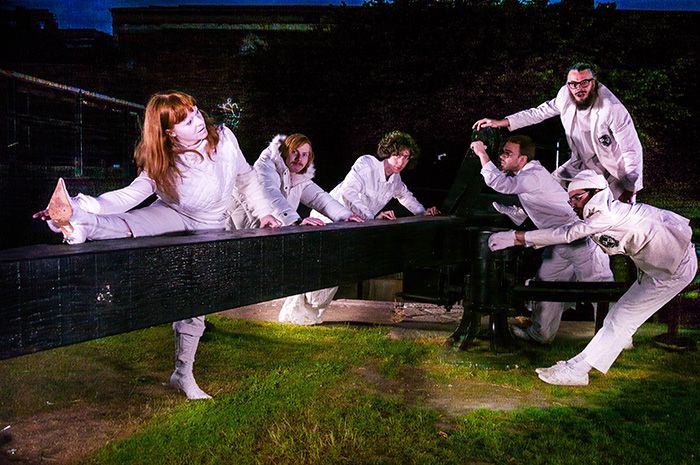 Often overlooked and always astounding, Getintothis’ Chris Burgess looks to praise the eclectic Liverpool band ahead of the release of their new album Fun with Music.

Imagine this; a band has been around for nearly 20 years making a sizable and measurable impact on their home city’s music scene. Imagine they played a wide and varied range of genres, with fantastic musicianship. Imagine they’d supported some of biggest names in alternative music and toured Europe.

Imagine they’d scored films for the BBC, been awarded ‘Album of the Week’ nods from Radio 1 and performed with a full orchestra on occasion. You think the city would celebrate them, right? Or have heard of them? Or at least be able to pronounce the band’s name.

Yet mention the name a.P.A.t.T. to people in the city and most will shrug their shoulders or look at you blankly, even though they’ve done all of the above.

One of the city’s leading avant-garde bands – as they have been for years – seem to have made it their mission to fly beneath the radar, from the intriguingly acronyms of their name to their secretive stage monikers, the band don’t seem to want to be found.

Well tough shit guys – we know who you are and we’re going to give you the props you damn well deserve.

Formed in 1998, the band has been consistently inconsistent in terms of their musical offerings – not in quality, which has remained high, but in terms of genre. a.P.A.t.T. veer from one musical style to another, from album to album and track to track.

Early on, there was evidence of a Cardiacs and Mr Bungle influence – their Welcome to a.P.A.t.T Island album serving up some clear examples of this. However, there always seemed to be an underlying art-school philosophy of ‘let’s try something different’ even at their early gigs.

By the release of 2005’s self-released Fre(e.P.) the band has evolved – mixing a range of classic pop samples and beats to create a set of unsettling yet playful mash-ups, while also finding time to record a live soundtrack to the classic early-cinema film Nosferatu for the BBC. Both high and low culture, re-purposed with a subversive slant – perhaps the key to doing things the a.P.A.t.T. way.

And then in 2008, to keep their audience guessing again, the band released the magnificent Black & White Mass – a stomping 27-track odyssey of a record, letting them show off their full musical chops. Black & White Mass veers from prog-metal to jazz-psyche and beyond.

The band had also expanded, becoming the a.P.A.t.T. Orchestra for live shows that included performances of works by John Zorn, Steve Reich, Shane McKenna, Gavin Bryers and more – all intellectual and challenging musicians cut from the same cloth.

2012’s Ogadimma saw the band leap even further into the mind-bending. With no two consecutive tracks of the same genre, the album forces you to listen not only to a.P.A.t.T.’s truly outstanding musical talents, but makes you stop and reconsider the elemental structures of the individual styles they perform, questioning what makes up the very essence of musical composition.

From grindcore to hip-hop through orchestral and synth-pop, the album never stops surprising, even three years on from its release. The 4-minute long lolloping madness of Mumbo Jumbo lies central to the entire piece – full of Merseyside melodies processed fully through the a.P.A.t.T. mincer.

The band haven’t rested since then, and most recently have collaborated with Syndrome on a series of very-highly acclaimed performance art pieces based around themes of totalitarianism and dystopian visions.

Their new album, Fun with Music Is released in October, and the band will be touring in September across the UK and Europe, including a date at the Kaz Gardens on 19 August, and an appearance alongside Deerhoof at the Doune The Rabbit Hole Festival in Doune on 22 August.

The real beauty of a.P.A.t.T. is the sheer fact that no-one knows what to expect from them – so all we know is to expect the unexpected. The band describes the new album as “an adventure book choc full of off-beam characters”, and track titles include Peppercorn Rent, Lickspittle and the gloriously named You Treat Me (Like Peter Shit).

Yes…That’s Positive, the first single from the album was released last month, and with any other band we’d say it was a taster of what will come, but obviously that doesn’t apply here.

It’s time one of the most overlooked and underrated bands in the city get their dues. As Liverpool’s smartest, most creatively diverse and intriguing group, we should be shouting about them from the rooftops of the city. Long may a.P.A.t.T. continue to astound, amaze and make us question the very nature of music itself.