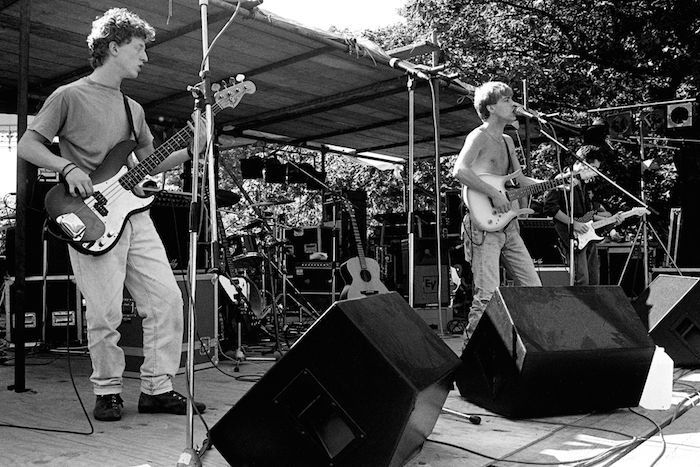 The La’s performing at Earthbeat

As LIMF festival approaches, Getintothis’ Paul Fitzgerald looks back 30 years to a renowned free festival in the park, and the counter cultural importance, and legacy of the organisation who put it together.

August. And the sun may well shine down on Sefton Park as we see the return of the Liverpool International Music Festival to these hallowed fields. The park is a magnificent venue for events such as this, and has a rich and varied history for lovers of live music.

In 1987, for three days over a steaming hot August weekend, a local arts organisation brought a broad, eclectic mix of talent from all over the world to play at a disused and distinctly unloved Victorian bandstand in the park. The La’s played. Pulp played. As well as a dodgy looking Manchester goth band in leather trousers and bandanas. They were called The Stone Roses, and they really weren’t very good.

World Earthbeat was an incredible and passionate collective of artistic, creative types who fused their individual talents and influences together simply to try and make a difference. In the dark, monochromatic days of the mid to late 80s, deep in the grip of Thatcher’s Britain, Liverpool found itself cast under by yet another uncaring government and its cruel, unforgiving social policy. A state of affairs which had existed, thanks to the help, or lack of help, of successive governments since the Second World War. Left to find its own way, as were so many Northern cities of the time, its youth searched for light and colour. For rhythm and sound. For someone to bring the noise, and open us up to new ideas, new thoughts, alternate states. The counter culture, coupled with a healthy respect for the DIY punk ethic became all important, and World Earthbeat represented that attitude entirely. Liverpool was damaged, but art could heal. That was the job at hand.

As its figurehead, but crucially, by no means the only contributor, World Earthbeat had Kif Higgins, artist, promoter, musician and community activist. Higgins brought together this band of brothers and sisters, and, based in his Bold Street flat, they set about getting the job done. Music, visual art, dance, social comment, political resistance, performance art, all played a part in the mix, and, in the first instance driven by little more than passion, and each others ideas, things started to happen. First came some incredible club nights, such as The Sun At Night and Club Logo. It was 1985, and the drum was beginning to bang.

As well as being used by the BBC for a series of filmed gigs in 1982 featuring, Echo and The Bunnymen, Bow Wow Wow, The Icicle Works, Nick Heyward and Big Country, the bandstand had also played host to a yearly event known as Larks In The Park. This latter event tended to focus on local music, and while that was undoubtedly of real worth, the feeling in the World Earthbeat Bold Street HQ by 1986, was that the opportunity existed to open this unique and iconic, historic venue up to a wealth and a world of influences from beyond the city boundaries, other countries, other continents, together with and alongside the local talent, and so, The Earthbeat Festival was born. Necessity. The mother of invention. And at that time, in that place, Earthbeat needed to happen.

Putting this event together was not without its challenges, and the sheer logistics of putting it all together, tying up all the loose ends, from funding to promotion to staging, at the every least seemed like an insurmountable challenge, particularly  in a world without mobile communications, the internet or even the most basic computer. But with the assistance of an ever expanding army of happy and creative volunteers, the weekend arrived, almost despite itself, and the funding from the Arts Council, and several local businesses, was able to be put to good use.

The well renowned and much respected Liverpool music photographer, Mark McNulty, discusses his Earthbeat ’87 experiences in his beautifully put together 2008 book, Pop Cultured. He found himself onstage on the Friday afternoon, playing guitar for excitable, loudmouth Scouse hip hoppers, Eat My Dog. “Three songs into a four song set, and I’m not doing very well, so I put the guitar down and left the stage. From then on, I stayed strictly behind the camera”

Thankfully, McNulty hung around the bandstand for the rest of the weekend, and published many of the images from that weekend, and subsequent Earthbeat festivals in Pop Cultured. That first day, also saw performance from Probe Plus Records favourite pschedelic heavyweights The Walking Seeds, poetry from Jegsy Dodd and Henry Normal, and was headlined by the lo-fi electro scream of Sheffield’s Dig Vis Drill, with Pulp playing before them.

Day two, Saturday August 15, opened with an early performance from junk rhythm orchestra Urban Strawberry Lunch, featuring Ambrose Reynolds of the Bombed Out Church, and was headlined by jangly London indie darlings Weather Prophets, who were managed by their former bass player, Alan McGee, and one of the first bands signed to Creation records. Also on the bill that day were the magnificent Sex Gods, a band consisting of Bunnymen drummer Pete De Freitas, Spiritualized‘s Mike Mooney, and singer Andy Eastwood who recalls this special weekend “ My best memories are of hearing Les (Pattinson – Bunnymen bass player) playing the bass line from ‘Over The Wall’ in the soundcheck and it blowing across the park, and the Earthbeat crew taking over the whole area for three or four days after the event. The Sexy’s gig was so much fun, but I remember all the other bands more”

Sunday 16th was the festival’s final day, and as well as some of Liverpool’s finest, such as the brilliant Treatment Organisation, and The Holding Section, along came a band called The La’s. Mark McNulty describes photographing their performance, as ‘the highlight of the weekend…they were the latest Liverpool band to be signed, and there was an excitement in the air about them playing…they sounded amazing, and I was virtually onstage with them’. The Stone Roses followed them on the bandstand. The casual observer could be forgiven, in fact, for thinking that, given the subsequent trajectory of the Manchester band’s career, standing stageside in Sefton Park, watching Lee Mavers band of renegades doing what they did, at that point in time, was all the persuasion they needed to put down the bandanas, bin the eyeliner, and rethink what they were doing. It certainly must have made for an interesting van ride back down the M62, for if everyone else in the park that afternoon was blown away by The La’s, then why wouldn’t Mr Brown’s Boys?

After a cool, jazzed out set from Manchester’s Yargo, and a closing final performance from all female reggae band Abacush while the sun set, the realisation dawned amongst the Earthbeat festival crew and organisers, that the challenge had been more than met, and the precedent well and truly set. All the logistical issues had been circumvented, and the insurmountable was no longer so. The festival returned in 1988, and continued until 1992 embracing the new dance culture of the times. When funding and licensing problems led to its demise, as with many things, it could be argued that the festival became a victim of its own success. But in terms of the original idea, the original plan of Kif Higgins and his cultural comrades, it was a massive success. Higgins once told his friend, and World Earthbeat graphic designer, Tony Egan, that if just one person’s eyes or ears were opened to the art in music, and the music in art, then it would have been all worthwhile. Those targets were indeed met, and all who were involved in both World Earthbeat, and the Earthbeat festival should be rightly proud of the legacy that they left behind with their desire to bring the light. To bring the colour to this dull, neglected and almost forgotten proud Nothern city.

“When I think of Earthbeat 87, its of the stark modern-primal imagery and design, the technical challenges of putting on so many disparate bands, and the fervent agenda of the Earthbeat team, who made sure we had a PROPER festival in the heart of our community. A mix of real bands, pretend bands like ours, performance art, overt political messaging and a strong desire to effect creative social change. This could only have happened in Liverpool, in 1987, and courtesy of the World Earthbeat team”

Kif Higgins died of cancer in May 2012. And though he is sorely missed by all who knew him, the drum keeps banging. 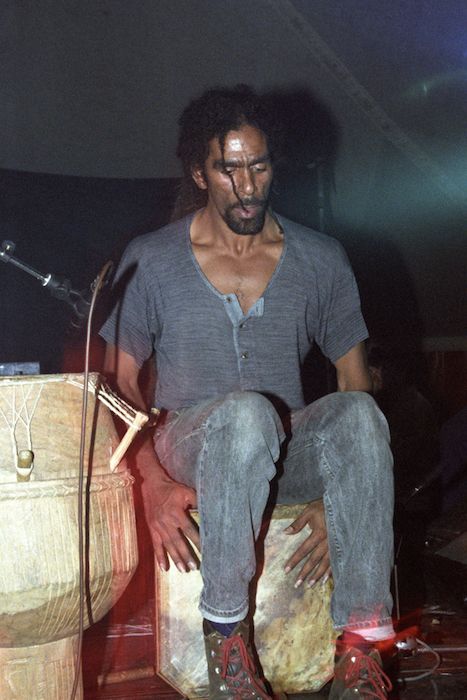