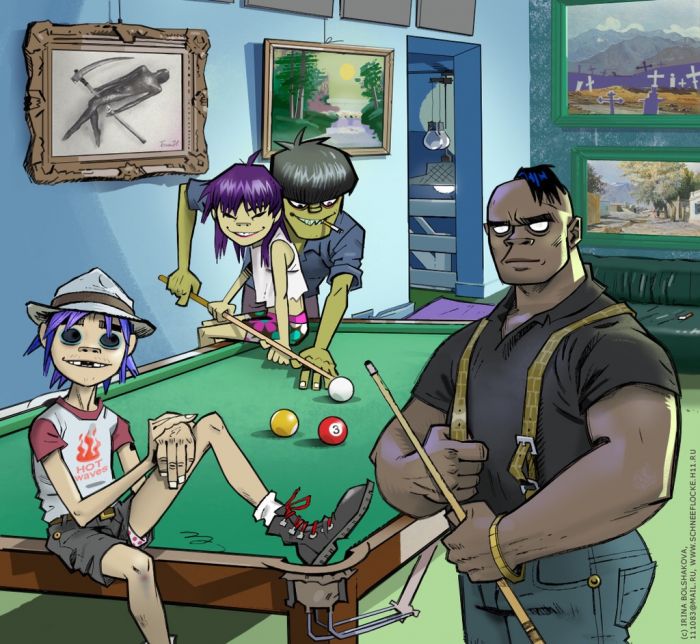 With a new album set to get under way, Getintothis’ own cheeky monkey Craig MacDonald takes us through the ultimate top ten Gorillaz tracks.

It’s been nearly 15 years since the virtual creations from the minds of Tank Girl co-creator Jamie Hewlett and musical visionary Damon Albarn were born into this world in the form of four mysterious individuals collectively called Gorillaz. Formed whilst the pair were numbing their minds watching the usual shite churned out by late 90’s MTV, the idea was to create something as a remark against what they described as a living hell.

The creative flat mates set about creating their diverse offspring and produced the troubled lead singer 2D, chaotic sex pest Murdoch, the haunted beat merchant Russel and ninja sprite Noodle. Seen by many as merely just a concept piece of work and some form of escape for Albarn from the in-house turmoil he was experiencing in Blur, the four piece have proved to be one of the most diverse and original groups of recent times.

Fusing together sounds from the worlds of pop, rock, hip hop, dub and electronica, Gorillaz are the proverbial square peg to the round hole. Throughout their work, the group has seen them collaborate with a who’s who of music from the stuff of hip hop legends in De La Soul, to Hollywood royalty in Dennis Hopper and the legend of soul Bobby Womack to name but a few. It’s safe to say that artists are now queuing up to work with the motley crew rather than the other way around.

Although known for being a cartoon band, Gorillaz as a live band have gained critical recognition for their show’s that has seen them grow from playing behind a well lite curtain to a full on accomplished ensemble that has seen the likes of Mick Jones from The Clash fame join in their antics. With hints of new material on the drawing board  set to be unleashed in 2016, we take a look at their top ten tracks so far from the multi-talented troop.

The second single from the groups third album Plastic Beach features is a collaboration between the addictive rhymes of De La Soul and the gloriously deranged vocals of Gruff Rhys. The tempo changing tale of King Neptune’s kitchen snacks crosses from reggae to slowed down beats into a coherent entity that sounds like a Class A induced Sponge Bob Square Pants episode.

9. Kids With Guns from Demon Days

On their second album Demon Days, the band brought in the production wizardry of Danger Mouse who added an atmospheric feel to their sound, none more so then on the third single from the album, Kids With Guns. The song was based upon a boy who turned up to Albarn’s daughters school and decided to show his classmates a knife at lunchtime that he found at home, citing the very real problem of violence being too familiar in children’s lives today. With an obsessive bass hook, it’s equally imposing musically as it is politically.

8. Bobby In Phoenix from The Fall

From Gorillaz’ fourth album, the entirely iPad crafted The Fall, the soulful astounding vocals of the late great Bobby Womack make this the standout offering from the album. Tinged in sadness and sweetness in equal measure, it’s a true wonder to treasure from the great man and a shining example of Albarn’s love for technology.

From the title, to the children singing in unison and the ferocious words of Bootie Brown, this track is an all out examination of all things wrong with war. With its funky beat, trip hop vibe and delicate strings, it proves to be one of the more catchier numbers from the bands second album.

6. Rock The House from Gorillaz

From the moment the sampled horns of John Dankworth sound out in this track, your instantly hit with a joyful rhythm that makes you want to join in with the trip hop party vibes. The exceptional rhymes of Russel’s inner ghost rapper alter ego Del The Funky Homosapien glide over the beats effortlessly to create an uplifting anthem.

This piece of animatistic magic has snake-like synths, progressive beats and to top it off the addition of the king of Madchester in Shaun Ryder banging out enough attitude to charge a small army of disco pop induced followers.In turn he reintroduced himself to the masses from a lengthy time in the musical wilderness whilst helping to create one of the most sublime moments on the groups second album.

One of the more emotional songs to come from the group finds the sorrow filled vocals of Albarn piercing us with tale of mourning and loss. With far less electronics than usual, the touching acoustic offering is perhaps the closest the group get to a ballad in their history and also the most similar to Albarn’s other groups work. At times it feels like a man awaiting his fate in front of him devoid of all hope such is the emotion.

The first song that the band released is perhaps their most defining in the way it altered people’s perceptions of what to expect from the group and firmly put doubters in their place who questioned whether they would be seen as a lesser vehicle to Albarn’s Blur. The ghostly reggae chorus from Albarn and slick rapping of Del The Funky Homosapien make take the track as far away from the indie workings that people expected as could be possible.

The penultimate track in our run down is the lead single from the groups second album and is the first collaboration between the foursome and De La Soul. The alt-rap-rock masterpiece features a crippling chorus and immense bass line even before the rap gods tear into it. When they do drop in, they blend into the track with effortless ease dishing out hook after hook of classic lines, making it one of the most irresistible songs from the troop of primates.

Built upon a solemn low-toned hook that marries in with Albarn’s eerie mantra of chants, the first single from the groups third album Plastic Beach is unstoppable from the get go. As the sinister groove ticks on, the lofi transmission of Mos Def transcends into the verse before the unmistakable power of the legendary Bobby Womack comes in to dish out an unhinged passionate moment of electronic funk. The outstanding example of the talents that Mr Albarn has within, we can only hope that their new effort is not too long in the making.