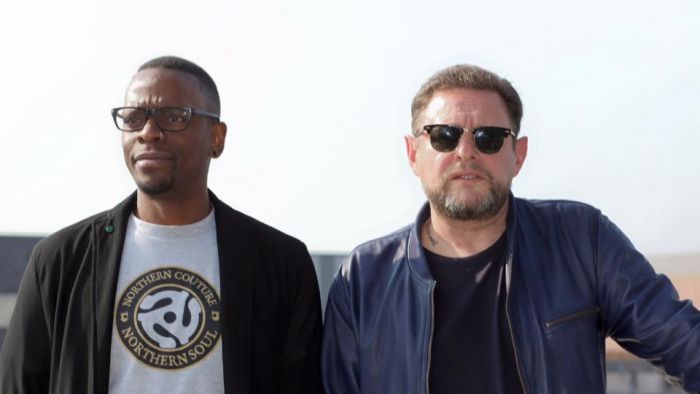 Shaun William Ryder picks up the phone on a Bank Holiday Sunday morning, yes, MORNING, and answers like a member of the Wide Awake Club.

Effusive, buoyant, and in positively perky good humour, our generation’s greatest living poet asked us to call him early. On a Sunday. Shaun Ryder. Times change.

First up, we get “So, what are we talking here mate, solo stuff, Mondays or Black Grape ​cos I’m doing all three at the moment?” Busy man. No wonder he gets up early these days.

We remind him we’re discussing the forthcoming gigs to celebrate the 20 anniversary of the Grapes‘ seminal 90s album Its Great When You’re Straight… Yeah.

Rising from the ashes of an imploded Happy Mondays, Ryder came striding gallantly out of the darkness of those days with a new band, a new sound, a couple of rapping mates called, obviously, Psycho and Kermit, and a set of funked up, chaotic, loose fitting songs.

Fit and healthy, and with his demons mostly behind him, he picked himself up, dusted his baggy jeans off, stepped out into the glaring post­ Madchester light, and started all over again.

Getintothis: So, its 20 years since the album came out, have you got some good memories of those days?

You know, with Black Grape, I sort of feel like I got my little bit of revenge, after the Mondays, I went off to The States to get my head together while I sorted out this deal, and when I came back to Manchester, I started getting all these knocks on the door, and everyone was telling me that my career had finished, and I should be doing this, or I should be doing that, and I just kept my mouth shut and got on with the album.

Then, when it came out and went straight to number one, it were like, FUCK OFF! One in the eye for em all, mate, one in the eye, proper.

Getintothis: And now you’re back, in the rehearsal room again, and you’ve got Kermit on board, how’s that going?

Ryder: Oh yeah, man. He’s in a really good place at the moment as well.

About two years ago, I did a one­ off Black Grape gig at Brixton Academy, and I couldn’t bring him back on board, it wasn’t right, he wasn’t quite where I wanted him to be, so I brought this other kid in, Tonn Piper, who’s into drum n bass, and then I kept on bumping into Kermit again, and he seemed to be getting better and better and in a really good place, I mean, he’s 50 and he looks like he’s in his 20s, so he’s doing something right, he looks great.

Then one of my publishers reminded me its 20 years since Great When You’re Straight, so I thought, right, better get out and do some dates.

It started off as just a few festivals but its kinda mushroomed into a full 21 date tour too, and we’re well up for it, but it also comes on top of the Mondays stuff I’m doing, cos its the 25 Pills,Thrills, and Bellyaches next year, where we’re going out doing the whole album, so we’re gonna be doing both at one point.

Getintothis: I remember the first Pills and Thrills dates well. One, in Widnes, in particular stands out in my memory. You stormed the place that night, blew us away, it was a very special gig.

Ryder: Yeah, that was the Queens Hall, its gone now. We set up camp there and used to practice, it was a brilliant place.

We’d hide out and practice, and no ­one could ever find us.

Getintothis: So, festival season’s coming. Can we find you in any fields this year?

Ryder: Yeah, we’re doing a load with the Mondays and Grape, we’re all over the place this summer.

One I’m really looking forward to is Festival No.6 with Black Grape. I’m really up for that, cos I’ve heard a lot of great things about it.

I’ve never even been to the village, never mind the festival, so it should be a great one. It’s all a bit busy at the moment, and I’m working on my solo stuff too.

It’s the testosterone injections straight in the heart that do it.

Getintothis: Apart from the Manchester and Warrington dates, any plans for a date in Liverpool?

Ryder: Yeah, I’d love to play there, always had a great time in Liverpool, and I’ve got loads of good mates there, so it’d be great to get over there. I’m hoping to see you all soon, man. Nice one, man. Nice one.