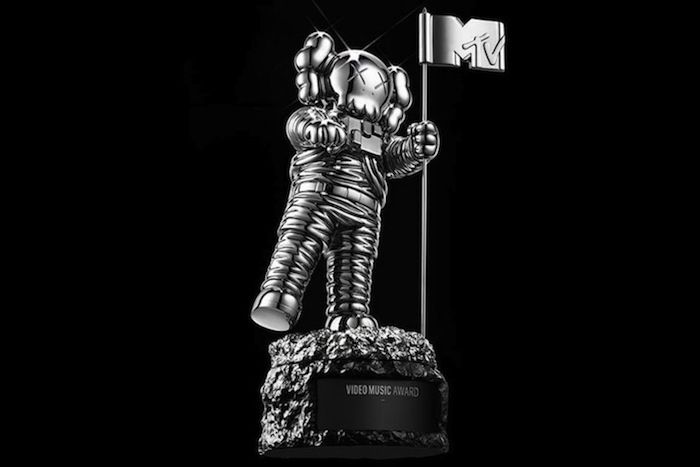 More a series of boring publicity stunts than an awards show, Getintothis’ Shaun Ponsonby takes a swipe at the MTV VMAs.

Like the rest of Getintothis HQ, two weekends ago and for much of the following week, Cosmic Slop were nipple-deep in all things LIMF. This sadly meant I missed the VMAs and, crucially, Kanye’s definitely well-thought out announcement for the 2020 presidential run.

So, I sat back and took in the sheer horror on catch-up a few days later and it made me wonder; does anyone give a shit about the VMAs?

It really is the absolute worst of all the lowest common denominator, ceremonial self-fellating wankfests out there, isn’t it? It makes the BRITs look almost prestigious in comparison.

It was Kanye’s appearance that summed the entire spectacle up. It’s all about ratings-spike stunts. It revealed many of Kanye’s contradictions too (a man with his own clothing line bemoaning that kids look up to brands?). He will say something interesting and mainly correct, followed by something idiotic, embarrassing and contradictory right after it.

Plus…running for president, Kanye? Really? I’m pretty sure just about every blogger in the world has said something on this by now, and maybe there’s nothing new I could add to the discourse. But that’s never stopped me before…so…

I’m going to hazard a guess that he’s running on the left, which will be good for the left as well. Because usually the hugely brash, eccentric, downright bonkers and wholly out of touch candidates are on the right (*cough*Trump*cough*).

The widespread criticism of politicians in the west these days is that they are completely out of touch with real people and that they live in their own bubble. I’m not sure a man who refers to himself as “the world’s greatest living rock star” is the one to bring a significant change to that.

I think Kanye is very talented, and he has the world’s attention right now. I would love it if this was all a rouse to get the said attention and I keep hoping he will turn around, drop all the crap and say “now, let’s talk properly”. But I have zero faith that this is the case. So Kanye, if you’re going to run for president in the same way that you do everything else, thank you. Because you’ve just made my job so much easier.

The whole speech took him thirteen minutes. Thirteen minutes. To put that into context, the half-time performances at the Superbowl is twelve minutes, and the average length of sexual intercourse in Canada is seven minutes (don’t ask me how I know that).

Frank Sinatra was given a Lifetime Achievement Award at the much more buttoned-up Grammy’s in 1994, and they cut him off for a commercial break after around four minutes, with Billy Joel stopping his performance a little while later, looking at his watch and saying “valuable advertising time going by” in protest. Because award shows that are being broadcast need to run to time, and American networks are a slave to the advertiser’s dollar.

So…how could Kanye get away with thirteen minutes? Easy (“yeezy“?), MTV wanted it that way. West probably deserves an award for his music videos, but there is little doubt in my mind that MTV had an ulterior motive in giving it to him.

Kanye approval is probably at its absolute nadir at the moment. I think out of everybody I know, there are maybe two people who actually support the stuff that comes out of his huge, great big, fat gob. It’s a shame that he comes out with such self-righteous, egotistical bullshit, because he also says a lot of things that make sense.

More so than any other awards show, the VMAs is not about music. It’s about controversy. Giving Kanye a platform for a thirteen minute speech on live TV is a signifier of this. As is getting Miley Cyrus to host. And look at the nominations for Best Rock Video. Why’d You Only Call Me When You’re High? The VMAs, taking place in autumn 2015 is honouring a music video released in the summer of 2013? Really? Shouldn’t MTV be a little more on top of this kind of thing? Does that sound like an organisation who are concerned with music? Yes, conventional wisdom says that MTV isn’t about music anymore, but they could at least pretend to care.

I think they court it. Miley Cyrus’ infamous twerk with Robin Thicke a couple of years ago wasn’t shocking or offensive because of its content. It was shocking and offensive because it was bloody awful. Bad singing, bad songs, awkward stifled dancing, forced. It was uncomfortable because it was embarrassing. But, we all read elsewhere that it was shocking because of its content, and so that became the conventional wisdom.

That’s essentially the case with the kind of controversy that comes out of the VMAs. There isn’t really any controversy, but the press tell us it’s controversial, because if they don’t play ball they won’t get the exclusives in the future. That’s the game they’re playing.

So, let’s cut the bullshit, shall we?

Why would anyone want to buy a BRIT Award once owned by Abz from 5ive?

Michael Eavis has said that headliners for the next two Glastonbury’s are boxed off. And yet he says something similar every year, despite a regular last-minute scramble to book someone (Beyonce, Metallica, The Who)

I feel the need to tell Lemmy to get well soon.