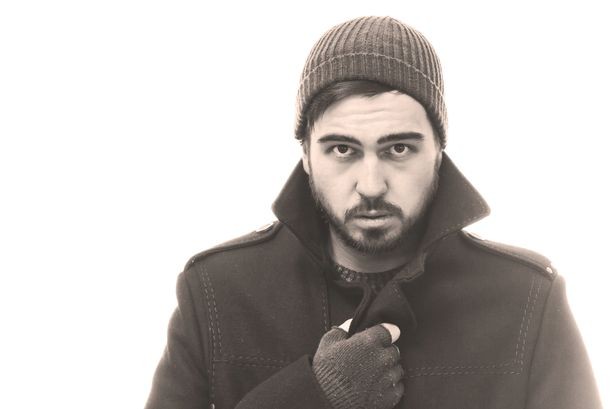 Narvik is running at Liverpool Playhouse until Sept 19

Award-winning playwright and songwriter Lizzie Nunnery took time out of rehearsals to talk to Getintothis’ Jamie Carragher about her new, critically acclaimed ‘play with songs’, Narvik, which is at Liverpool Playhouse Studio until September 19.

About to enter the second week of its eleven night run at Liverpool Playhouse, Narvik by Lizzie Nunnery has been receiving rave reviews. The play encompasses love and war through the vehicle of a 90-year-old man’s recollections of his naval campaign and a past romance, brought to the forefront of his consciousness after suffering a fall at home.

We had a chat with the award winning playwright and composer, Nunnery, just before the start of the run. She gave a great insight into the story behind Narvik and the processes that came with creating the script and preparing it for the stage.

Getintothis: Hey Lizzie, how have rehearsals been?

Nunnery: It’s been great, yeah. It’s always lovely after working on the script for so long to suddenly be in a room doing practical things: talking with the actors about what everything means and how we’re going to approach things, but then, also, singing songs. This morning we’ve done a big movements session which seemed quite daunting but actually it’s just been great fun.

There’s three actors and three musicians, including me. Everyone’s going to be on stage all the way through. We didn’t want to be just the band in the corner who are redundant when we’re not playing a song. We’ve got a really active role in the drama. Even though we haven’t got any lines,  we’ve got a lot to do on stage.

Getintothis: How exactly does the band interact within the play?

Nunnery: Without giving too much away, we’re a jury of the dead, moving around the central character, Jim. Judging him and analysing him and haunting him.

Getintothis: And the songs are judgements on Jim?

Nunnery: Not in a cynical way, no. There’s an element of that. Some of the time the songs are giving an insight into the emotional world of characters that is secret and interior, that can’t come out in dialogue in the same way.

All the songs are attached to memories and characters in his memory. The play moves between Jim aged 90 and Jim in his twenties, in the navy in the Second World War. So we might hear them sing a fragment in a naturalistic way and then that song will come back performed in a really surreal, strange way performed by the band. There’s a logic of memory as to why all the music is there.

Getintothis: You’ve billed this as a play with music, rather than a musical. Why is that?

Nunnery: It’s hard to define the difference, isn’t it? On one hand it’s because a musical carries certain expectations and I’d hate for someone to come thinking it’s the Lion King.

Getintothis: Well, with all this movement going on, who knows, it could be-

Nunnery: Yeah. But, also, in a musical there’s definitely the expectation that the characters are going to sing to the audience. We wanted to do something a little more unusual, really, having the band taking up roles within the play but performing the songs, in a way, separately.

In a conventional musical there’s a pressure on the songs to move the narrative on all the time, to act almost in place of a scene. Whereas, with this, I wanted to do something a little more subtle and delicate that was about revealing character and tone and atmosphere.

Getintothis: Did the story come before the songs?

Nunnery: They came together, so I suppose the songs grew out of the story. We did a ten minute version of it at the Everyword Festival a couple of years ago that just had one piece of music that ran throughout the whole ten minutes, kind of underscored the scenes. It was thrown together so quickly but it unexpectedly worked really well and we got really excited about it. And that song is still in the play now.

It felt quite natural when I was writing the script that there were moments when music would take over. It’s not a literal, naturalistic play at all, in the sense that we’re in Jim‘s basement, where he’s fallen over and he’s delirious and  he’s 90, and we’re also in the Arctic, and on a ship, and we’re in Oslo. And all these places are transposed over his basement, where all these memories come to life.

It’s been about getting to know the characters and the history as well, exploring these themes of guilt and regret. It’s a love story and it’s about the way war intervenes and blows peoples’ lives apart. It’s been about exploring all those ideas and finding the songs within that. 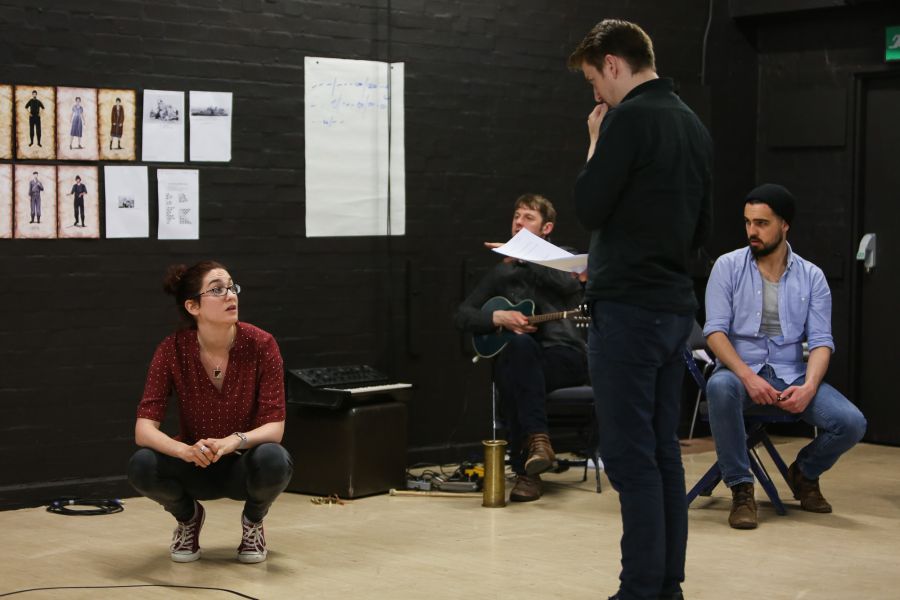 Getintothis: So, as well as being the writer, you’ll be singing every night?

Nunnery: Yeah, everyone’s singing at least a little bit but I’m doing most of the singing.

Getintothis: Gotta look after those pipes.

Nunnery: Yeah, I was thinking that. It’s like being on tour, I suppose. You’ve just got that pressure not to go mad and get drunk on the first night.

Getintothis: Speaking of drink, your last album’s called ‘Songs Of Drink and Revolution‘, is there any drinking or revolution in the play?

Nunnery: There is drink- there almost always is, in everything I write. My first play, Intemperance, everyone was drunk all the time in that play. I don’t know why, sometimes I stop myself doing it. The lovely thing about characters drinking is that it releases things in them that wouldn’t come out otherwise. But I think it’s important not to do that too much… sometimes I say, “Come on- the characters are sober in this scene.” There’s at least two scenes in which the characters are drunk. But it is set in the navy during World War 2. There was a lot of drinking to get through.

Getintothis: In the navy, you’d drink to obliterate the fact that you’re freezing on a ship.

Nunnery: Yeah, there was a standard issue of rum every day to help everyone get through, a tot of rum. There’s loads of stories of people saving them up over a week so they could get wrecked on one night.

But also, we’ve got a scene set in Murmansk in Russia which is in a makeshift camp and we’ve got a band playing in a bar in this camp. Traditional Russian music is really good fun. The central character, Jim, has been drinking Russian moonshine vodka and he’s completely lost it. After all these months on the ship, keeping a lid on everything, everything’s released and that’s the climax of the play in a way.

Getintothis: Warships often appear to be pressure cooker environments. Does it help that the play is set in the studio, with the audience being trapped in such a small place?

Nunnery: That’s something me and the director, Hannah [Tyrrell-Pinder], have been talking about from the very start. All along we have been having those conversations about how to replicate that feeling of claustrophobia and that intensity of being on a ship within a studio theatre, and  actually it lends itself really well to that. We’ve got a big sub under the audience so they can feel the vibrations.

Getintothis: A lot of work and research goes into creating a play with historical basis. Did you feel any pressure to be true to the events?

Nunnery: We did feel pressure early on. Me and Hannah had three days, just the two of us, in a room with research material and we both did loads of reading. We plotted out Jim‘s plausible, historical journey through the war. We kind of made sure that the story I wanted to write was possible. And then it was a really lovely thing to let all that detail go.

And actually that’s not what the play’s about at all. We don’t need to know that he was transferred from one ship to another ship and exactly where it sailed. We can then just explore the emotions of that journey and the relationships that come out of it. But it feels quite nice to have that basis if there are any history buffs in the audience.

Getintothis: In your previous plays, Intemperance and The Swallowing Dark, you’ve had nautical themes and the exotic prospect of faraway lands.

Nunnery: There’s a really lovely tension to play with between home and escape. The draw of home and a place to belong; a place to have an identity and the draw of faraway lands, places where you can reinvent yourself. That’s in Intemperance: the characters who are desperate to get out of their difficult situation, of poverty.

It’s in this play as well, in a very different way. You’ve got characters who are trapped by circumstances, really. The female character called Elsa, in another point in history, she probably would have done incredible things, and travelled the world, but being a woman in Oslo in the 1940s, even if there hadn’t been a war, she was constrained and there must have been an awful lot of women who felt like that for a very long time. There’s a line in the play about wanting to ‘slip out of your skin’ and that applies to all the characters in one way or another. Yeah, they all have that desire to escape.

Getintothis: War was seen by working class people as an opportunity to travel back then.

Nunnery: I think the army still is for a lot of people. There’s again something really dramatically useful about expectations being thwarted. You know, these young lads going into the war, full of ideas of heroism and excitement and really keen to live up to a certain idea of manhood. These are lads whose fathers were in the First World War, who had the masculine ideal held up to them all their lives. A lot of the play is about how actually the reality of war makes it very hard to live up to that masculine ideal because no one really knows how heroic they are until they’re under pressure. 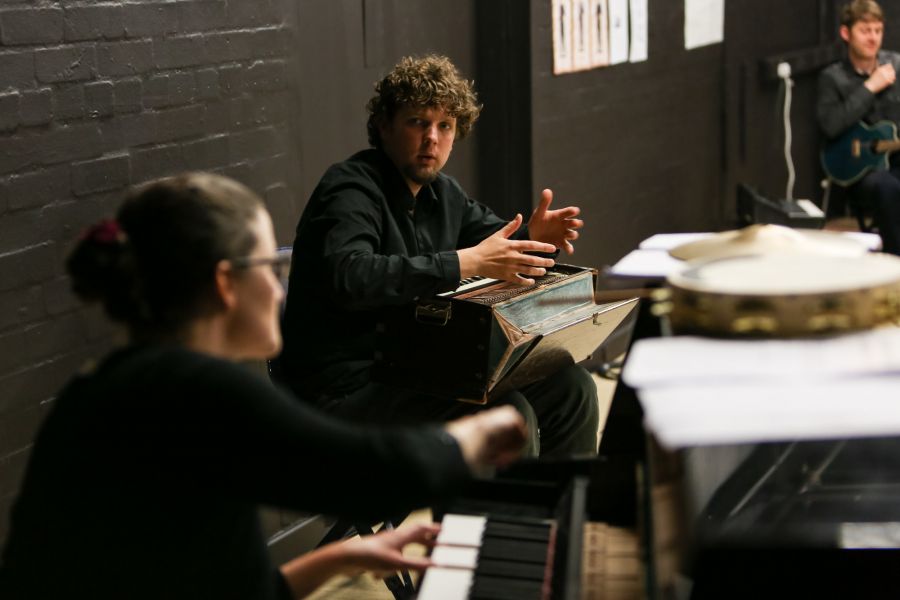 Getintothis: You’ve talked about the long term involvement of your director, Hannah, and you also composed the music with Vidar Norheim and Martin Heslop. How influential has the collaborative element of the play been?

Nunnery: It’s been massively influential. It’s a play that started with collaboration and, really, wouldn’t have come about any other way. There’s no way I would have written this piece in a room on my own- it wouldn’t have been possible- and it’s been lovely to work that way. Writing a play’s always hard, but it’s been really enjoyable because there’s always been really talented people to bounce ideas off and draw ideas from.

And yeah, collaborating on the music right from the start with Martin and Vidar has been so important because the tone of the songs completely informs the tone of the scenes. It’s been really reciprocal.

For more information and tickets for remaining performances of Narvik click here.