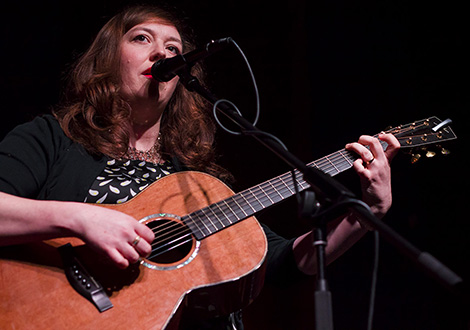 We hear a lot about female artists dominating the music game these days.
You know what we mean: a few million sales for Adele, Lady Gaga and Florence Welch and the tastemakers break out the ‘women in music’ profiles. They’re very popular. Often full of factual figures, too. But all a load of sexist poppycock.
As, if the truth be told, great female songwriters have always stood their ground against their male counterparts. And what’s the difference, anyway? A good song is a good song and Kathryn Williams writes loads of them.
Lizzie Nunnery has a few too. The Scouse songwriter and playwright opened this Mellowtone evening and captivated the packed room. The punters were in early, Leaf was listening (Spotify Wednesday hadn’t started yet, more of which later) and Nunnery – accompanied on lyrical drums and harmonium by her Norwegian producer, Vidar Norheim – placed us all under her innovative spell.
Poverty Knocks and England Loves A Poor Boy were the stand-out tunes and Nunnery’s homespun charm and wisdom won her many new admirers. She remains a songwriter to be cherished. 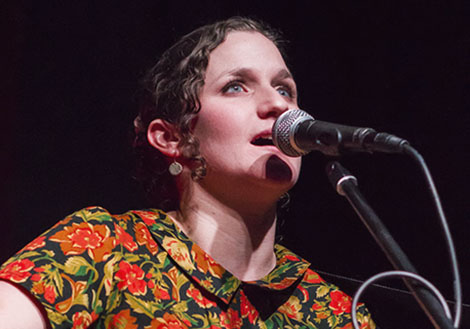 Folk singer Lizzie Nunnery
Cherished is a word you could use to describe Kathryn Williams. But it doesn’t seem to do her, or her craft, justice. Williams – born in Liverpool, but now living in the north east – is a songwriter of considerable talent and has continued to plough her own successful furrow for over a decade in the music game.
Early records like Dog Leap Stairs and Little Black Numbers brought her lots of attention at the turn of the century, but her more recent work is from the top of the shop too. At Leaf, accompanied by acoustic guitars, bass and keyboards, Williams showcased the majority of latest album, Crown Electric, and bewitched a sold out room with some fabulous and melodic songs.
Tunes like Underground, Heart Shaped Stone and the hit-in-any-other-period-of-recorded-music’s-history, Monday Morning, all sounded great and Williams’ singing was beguiling. Sure, there were a few quieter moments when the artistry demanded the crowd’s complete attention… but so what? True greatness never asks to lend your ears – it just demands it. 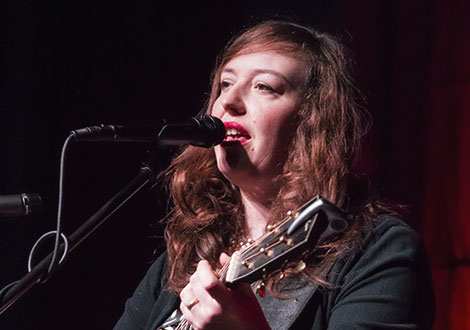 A singer and songwriter to be cherished: Kathryn Williams
A minor quibble – and nothing to do with Williams – was the noise coming from below the music room. But even the aforementioned ‘Spotify Wednesday’, downstairs at Leaf, couldn’t escape the singer’s sharp and righteous observations: “Spotify? 0.00006 pence per play? F&*k off!” It brought the house down, as those who chose to spend their money on actually listening to an artist live – as opposed to lining the pockets of those who stream their work – heard the convictions of a fellow believer.
The evening closed with a skeletal take on Bruce Springsteen’s Dancing In The Dark. It was perfect – and everything you want from a cover: reimagined, renewed and reinvigorated. She drained every last drop of emotion from one of The Boss’ most anguished lyrics.
It was Bono who once said, talking of Kirsty Macoll, that England needed to take care of its greatest songwriters. Think what you will of him, but he got that right. And please make sure you take the time to care about Kathryn Williams.