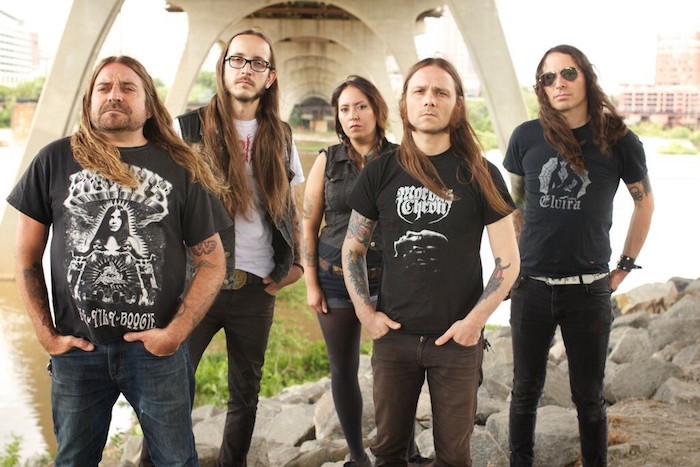 After a heavy weekend on a stag do, Getintothis’ Mark Greenwood reflects on the masculinity of the metal scene, and how it’s finally changing.

The ‘stag do’ is perhaps an accurate synecdoche to describe notions of masculinity and its inherent confusions within a 21st Century context. I am currently recovering from a stag weekend that drew many cherished mates from the four corners of the U.K to Liverpool and as you can imagine, heavy drinking, drug use and sport all seemed to be central themes. It seems sad that these recreations appear to describe the dodgier aspects of the male psyche while ironically excluding female participation.

Metal as a genre, likewise, appears to appeal to the darker male sensibilities, with its emphasis on power, war and violence, patriarchy, surveillance and control and seems to be intimately related to the violent narratives of a modern capitalist state. This intimacy manifests in the offerings of bands like Slayer and Iron Maiden, who have coincidentally released new albums in the past few weeks.

The latest Slayer album, Repentless has all the ingredients of a decent thrash album. As per usual the drumming is frantic and the riffs are ferocious with some especially alarming sound-bites pronounced by Tom Araya’s violent vocals. It’s a good album and still feels contemporary, despite its formulaic approach, with new guitarist Gary Holt (of Exodus) filling in for the sadly departed Jeff Hanneman. I’d argue that this is probably best Slayer album since Seasons in the Abyss and despite the usual Slayer clichés…it seems the band are in decent fettle despite their significant loss.

The same could be claimed in relation to Iron Maiden’s Book of Souls, a slickly produced double opus that feels quite progressive with its range of tempos and conceptual themes. It’s a canny listen but not especially exciting.  In fact, Maiden appear to embrace the fundamentals of metal machismo; the swearing and sweating, the combination of craftsmanship and high-tech jiggery pokery representing a kind of pathetic idealisation of masculinity from a bygone era.

A much more inspiring release this month comes in the form of Windhand and their latest album Grief’s Eternal Flower released on the Relapse label. Dorthia Cottrell is a gutsy and mesmerising frontwoman bringing a refreshing melodic edge to a heady mix of doom grooves and massive riffs. It’s a head fuck of an album that firmly asserts Windhand as an infectious and genre transcending band, intelligently blending traditional doom with psychedelia and acoustic bliss. It’s a wonderfully dark and hypnotic record and I’m dying to catch them live.

It’s refreshing to see significant shifts in attitudes with modern metal/hardcore genres, especially in relation to the attendance of women at gigs. It seems that with the exception of bands like Girlschool and Warlock in the 1980s, women were subject to a kind of ridiculous objectification within the genre and their only hope was to try and imitate their male counterparts. Metal, in all its manifestations should be read as a critique of the capitalist state rather than as force majeure that legitimises its dubious and crude narratives. A blueprint for alternative metal in the 21st Century needs to embrace intelligence and equality, providing an autonomous space for those violently silenced by the mechanisms of patriarchy so pompously enforced in the various ‘cock rock’ manifestations of 1980s metal.

A political astuteness is very apparent in Liverpool’s very own Dawn Ray’d, who utilise a crusted black aesthetic to describe a commitment to anarchism and the death of capitalism. Rising from the still smouldering ashes of We Came Out Like Tigers, Dawn Ray’d are innovatively brutal and confrontational. Imagine being strapped to an exocet missile and fired through the Mersey Tunnel at great speed and you’ll get the picture, though the ultra-violence sometimes subsides into softer, yet equally composed moments of sadness and alienation. Check out their first release A Thorn, A Blight on Moment of Collapse Records…if nothing else it will definitely blow away your chemically induced hangover.