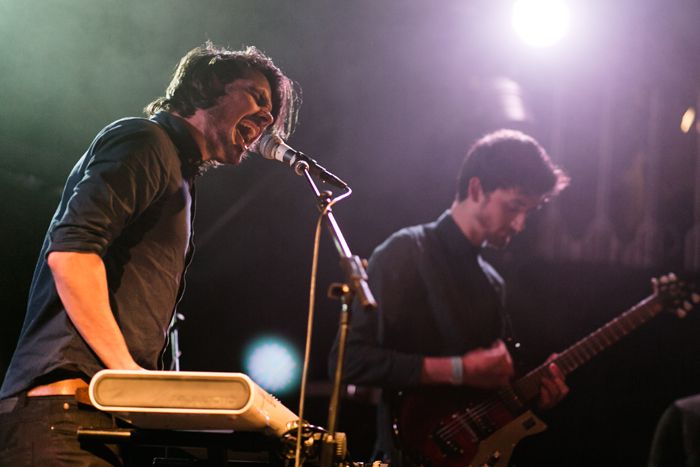 In Etches homecoming show, Getintothis’ Craig MacDonald takes in a night of atmospheric delights in the celestial surroundings of the Arts Club.

Among the serpentine innards of the Arts Club, you can find an assortment of painted heads hanging down from the ceiling. It’s an image that instantly grabs your attention and challenges your thoughts. The same could be said about the three groups that play tonight.

First up are Venus Demilo who get tonight’s proceedings off to a strong start. The four piece all play tight combinations of melodic pop rock that at times smacks you in the face in a wall of intensity. This is a group that has potential and through their set they do deliver on that at times.

In new track Sophia, they demonstrate their blossoming ambient psyche to tremendous affect, much in contrast to later in the set where their penultimate track comes across flat and more of a filler before rescuing the set in their finale. Over hearing the groups nerves later in the night at the prospect of a reviewer for Getintothis being at the show, the quartet can be safe in the knowledge that tonight they did themselves proud and found a number of new fans.

Next up are the enchanting Mancunians MOTHER. From the get go, the five piece are instantly commanding with My Lies creating an eerie sense of wonder in a simple yet stunningly effective offering. In a moment they completely transform into an all consuming wall of sound which they unleash upon you with a tidal wave of fascinating beats and rhythms.

The diverse sounds that MOTHER create are compelling with the use of spoons and what resembles a Toys R Us Saxophone adding to their intricate audio web. One of the key ingredients in their dynamic persona is the remarkable vocals that are utterly transfixing. Despite this there is a feeling that the audience are missing what’s in front of them and MOTHER leave the stage with barely any recognition from the crowd. On a different night, to a different audience, this performance would have been received to rapturous plaudits.

Thankfully, the presence of Etches quells the crowds thirst for the headliners as they take to the stage. Kicking proceedings off as they mean to go on, the quintet set us off on a voyage of eclectic soundscapes and vast canyons of life replenishing drops. Filled with lush textures and minimized electronica, they are unrelenting in their infectious synth pop.

The crowd react well to the new offerings from Etches but the night steps up a notch when the group issues The Charm Offensive. It is a haunting outpouring of raw emotion that captivates the entire room on mass. This despite the singer advising that he was on the verge of losing his voice.

The set concludes with a back to back run through of two songs to be taken from the groups Wall of Sleep EP. Both tracks are equally graciously received from the audience and are just as brooding live as they are in the studio versions in another example of the ease in which Etches are able to adapt their sound. They continue to push the boundaries of which they rule over and long may they continue to do so.