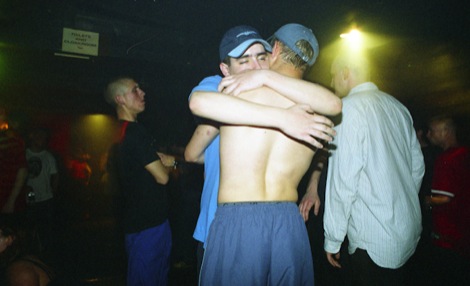 Liverpool club night, Voodoo, was renowned for hands-in-the-air parties and hosting some of the biggest names in techno, Getintothis’ Banjo reflects on how it became a lifestyle choice.

Voodoo was Liverpool’s first and best techno night and has been running, on & off and at various venues, since 1993.  Starting at Le Bateau, this dark, sweaty cellar brought some of the biggest names in techno to the city; the Chemical Brothers, Carl Cox, Richie Hawtin and Jeff Mills are just some of the acts who were involved in making Voodoo famous across the country…along with the Voodoo crowd themselves.

My own first experience with Voodoo happened after a search for a proper dance club.  This was when both dance clubs and the Internet were in their infancy, pre-Google, so the only way to find somewhere really was word of mouth or just trying different places out and trusting to luck.  We tried a few places around Liverpool, Manchester and Lancashire with limited success, but they had an air of acid tourism about them, in that there seemed to be a lot of people wanting to look at the weirdos they’d read about in the papers.  Plus they were all still the old type of club, slightly done up for a new crowd, they didn’t seem right, or any different.

And then one Saturday night someone suggested we try Voodoo, so we piled into cars and headed off.  As soon as we walked down the stairs to the dark basement all thoughts of this club not being the real thing were banished.  A hot, loud club full of people really going for it on the dancefloor, no posers, no tourists and DJ Lewis (The Orb’s tour DJ) banging out the tunes.  Minimal lights and no theatrics meant that the music and the crowd were allowed to be the main things in the club.  Everyone seemed into it, even the barstaff were jigging away whilst passing out free water and serving the occasional pint.  Our conversion to Voodoo wasn’t instant, but we had at least found a night we wanted to return to.  A couple of weekends later we were back and then, slowly but surely, Voodoo became our club. Later it became the centre of our life.

Voodoo had echoes of my first clubbing phase when, as a wee lad, I went to the Eric’s matinee shows.  Again there was the chance to wander into a grimy basement and see acts who had been in the newspapers or on Top of the pops just days before and a sense of being involved in something that was about to go overground.  Sometimes the planets seem to just line up right and everything seems to click into place, this was one of those times – we were in on the ground floor and those coming after would regret missing what was going on.

I once read an article in the NME, where Julie Burchill reviewed the week’s singles and slagged each of them off for not being by The Sex Pistols or Patti Smith.  She went on to say that the reasons she loved the Pistols so much was that they were so total – you couldn’t love them without realizing how shallow, feeble and inconsequential every other artist was.  Voodoo operated in a similar way, once the place had got under your skin, all other clubs didn’t even come close.  One night a lad came in with a brand new Cream tattoo only to curse his luck that the week he’d had the logo tattooed on his chest he’d found somewhere better.  Compared to the rising ‘Super Clubs’  it was a no frills experience, but the techno scene was always about the music, the crowd and the shared experience, and this is where Voodoo won out over the likes of the Creams and Gatecrashers of the day.

New Year’s Eve at Voodoo was pretty much the high water mark of my clubbing experience, as well as the reason I no longer like going out on New Year’s Eve; nothing comes close to matching that time, that complete abandon – people on shoulders, hands in the air, like every gig you’ve ever seen on TV or seen a picture of and wished you were at.

As further evidence of Voodoo’s no nonsense approach to clubbing, one New Year’s Eve techno legend Robert Hood was booked to play, but was late arriving as he was in his hotel room waiting for the club to send a car to pick him up.  The car, of course, was never sent, so an angry Hood turned up at the club and tried to create a scene.  Hood was told, in no uncertain terms, to leave and the party carried on without him.

As a happy end to the story, he was recognized by some Voodoo goers who had failed to get tickets and was taken to a house party where he DJ’d into the early hours, apparently having a great night.

The turning point for me, the day where Voodoo became more of a way of life than just a club, was when a coach trip was arranged for 42 Voodoo goers to get to the Tribal Gathering festival in Luton Hoo – perhaps the first proper Dance music festival, precursor to the likes of Creamfields.  I desperately wanted to go, but none of my crowd did, so I decided to go on my own; I knew a few of the Voodoo folk to say hello to so I thought ‘what the hell’.  I may have gone on my own, but I came back with 41 new best friends.  From here on in Voodoo became an essential part of our lives.  For the next two years I only missed out on four Voodoo weekends, and I regretted those.

Other coach trips were arranged and the Voodoo crowd invaded other clubs for a night, such as the Orbit in Leeds when our own Andy Nic was invited to play alongside techno pioneer Joey Beltram or Sankey’s Soap in Manchester for the great Jeff Mills Lost Weekends.

What these clubs must have thought when 42 up for it scousers landed on their doorstep is another matter, but I can only assume they didn’t mind too much as the favour was returned and they came to visit us.  The coach trips themselves have become the stuff of legend amongst those who attended, with tales of mass shoplifting from service stations, 60-odd year old coach drivers trying their fist spliffs and long, hazy journeys back to Liverpool from far flung parts of the country.

Voodoo also invaded the Big Love and other Tribal Gathering festivals and we partied and danced our way around the country.  Some of the friends we made came to Voodoo to see what the fuss was about and our own social networks were formed.  And all the talk of club friendships not lasting or drug friendships not being real is just so much media bullshit, as my Voodoo family and I have grown up together, been on holidays and attended each other’s weddings.  Those friendships forged in the white hot Voodoo heat will be with me for the rest of my life.

Voodoo’s spiritual home was unquestionably at Le Bateau.  It may have moved to bigger, even better venues over the years, but Le Bateau is where it started and where its heart was – the right setting for the right crowd at the right time.  Le Bateau closed at 2.00, so after people had left a crowd would gather on the pavement and the question of where the party was would go round the still buzzing group.

Taxis would be hailed and the night was carried on at a flat, in a basement or god knows where.  The cliché about living for the weekend was completely true here, as sometimes we would leave our beds on the Friday morning and not see them again until Sunday night or beyond, recovering through the week and Blue Tuesday before readying ourselves for another Voodoo weekend.

In some respects the parties that followed Voodoo were an extension of the club rather than something separate; the same faces, the same music and everywhere you looked were Voodoo flyers and posters blu-tacked to walls, doors, ceilings and windows.  Voodoo became a tribe, something that identified us as a group of people.

Who were we? What did we do?  We went to Voodoo.

Voodoo’s success meant it had to move to larger premises and the 051 club years had their charms and many further adventures were had, but whenever I think of Voodoo, whenever I hear an old Voodoo classic being played, it’s the sweaty Le Bateau basement that I return to in my mind.