With the 40th anniversary of Horses on the horizon, Getintothis’ Craig MacDonald takes a look at the groundbreaking debut album that would define a generation.

Horses is a one of a kind album that was crafted by the bravery of Patti Smith and 40 years on it still commands your attention. Every element of it makes you stand up and take notice; yet it very nearly never saw the light of day.

During the recording of Horses, Smith chose Velvet Underground co-founder John Cale to take up the production reins, thinking the Welshman could accomplish the same magical sound she loved from the New York rockers. Sadly, in what Smith described as ‘a season in hell’,  a then naive young girl filled with gusto was in constant confrontation with a coke-fueled Cale throughout the whole process. Thankfully that tension would be harnessed to great affect in what ultimately helped to create what many see as the first record of punk.

Recorded in the hallowed grounds of Jimi Hendrix‘s Electric Lady Studios, this was a debut album that upon being released in 1975, would usher in a new generation; a generation that had a voice. That voice was Patti Smith.

The moment you see the sleeve of Horses and the polarizing figure of Patti Smith, you know this is someone that oozes cool. In the iconic image from Smiths‘ one-time flat mate and former lover Robert Mapplethorpe, one of the greatest ever album covers was born. Leaning back against the wall with her cropped black hair and black and white contrasting clothing, it’s a startling image that befits the subjects that crop up over the course of the album.

Thankfully, Smith managed to resist the cries from her record label bosses at Arista who wanted to alter and amend the cover. The asexual imagery stuck and with it, musical history had changed. At odds with the typically sexualised portrayal female singers of the era, Smith was standing up for her values and wanted people to take her as they found her.

Within the album sleeve of Horses, there reads the line ‘beyond gender’. It proves exactly what Smith wanted to achieve within her debut album:

“No, my work does not reflect my sexual preferences, it reflects the fact that I feel total freedom as an artist. On Horses, that’s why the sleeve note has that statement about being ‘beyond gender’. By that, I meant that as an artist, I can take any position, any voice, that I want.”

Over the course of the eight tracks that make up the album, many would say that Smith achieved just that.

Patti Smith started her artistic life as a poet and fused her work with music thanks to her upbringing in New York’s bustling art scene. From living with Mapplethorpe in the infamous Chelsea Hotel to frequenting the rebellious iconic walls of CBGB‘s, Smith‘s new home was the perfect place for her to hone her talents.

Born in Chicago, Smith hated the confines of her Jehovah’s Witness upbringing. Upon escaping to her new found freedom, she used her poetic talents to vent her anger at her past in the poem Oath in 1970. By playing through songs with her band, she would improvise her poems over the music till one day she settled upon a song by Van Morrison, Gloria. Comfortable with the starting point, Smith altered her poem with the song till she was happy and in doing so created one of the greatest opening lines to a song, ‘Jesus died for somebody’s sins, but not mine’.

…and what a song. While essentially a cover in all but lyrics, it is as distant a relation to the track Morrison and his group Them created, as you could possibly imagine. It would go on to be the first anthem of punk, an inspiration to a generation who wanted to be free from the man and be who they wanted to be. Filled with raw passion, Smith‘s sets of on her declaration of independence with ever increasing pace till the all consuming chorus washes you over with immense emotion.

On second track Redondo Beach, there is a decidedly darker tone to Smith‘s lyrics. Again based around one of Smith‘s original poems, it contrasts against the reggae-fused rock beat that bassist Ivan Král melodically builds to tremendous affect. The song surrounds the subject of guilt, specifically the guilt Smith faced when she had an argument with her sister after she ran away, left Smith to worry about the possibility of finding her in tragic circumstances:

“Everyone was singing, girl is washed up. On Redondo Beach and everyone is so sad. I was looking for you, are you gone, are you gone?”

The core punk element to Horses continues into Birdland in what Smith describes as her ‘greatest experience, as a performer, on Horses’. Inspired by Peter Reich‘s A Book Of Dream, the song circles around a young boy dealing with the death of his Father by altering reality till both of them escape to find a new existence together. This could again be interpreted as Smith expressing her need to break her shackles and be who she wants to be both as an artist and as a person.

It is perhaps the most jazz-influenced track on Horses, with the track bearing the name of the famous New York club named after Charles “Yardbird” Parker who, just like Smith, excelled in improvisation. Coupled with the guitar of Smith‘s lifelong friend Lenny Kaye, he himself a lover of all things musically abstract, the track finds Smith and her group at their most diverse throughout the first of two nine minute odysseys on Horses.

Although Free Money seems initially a far less grim song about aspirations of winning the lottery, this again carries a sinister meaning hidden within. When growing up, Smith’s family were extremely poor and the song is based upon her Mum’s vain hope that one day their fortunes might change.

The melancholy piano of Richard Sohl shifts as the dream changes in tone from optimism to desperation. As the frantic pace of Jay Dee Daugherty‘s pounding drums builds, the sense of urgency increases in the character Smith has created.

The delicate offering of Kimberley gives the listener a further view into the Smith‘s challenged upbringing, yet it also provides an insight into her spiritual side in one of the most popular songs from her debut album. 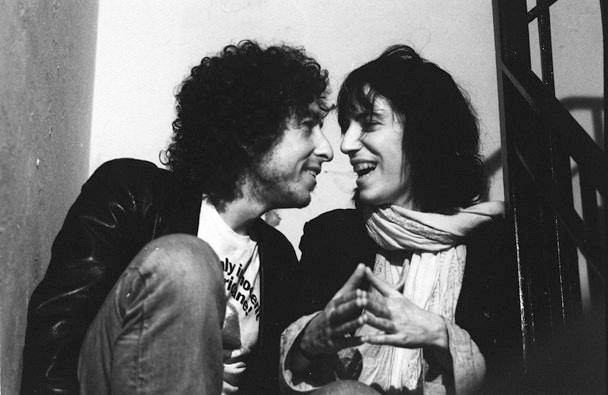 Smith and Bob Dylan sharing a joke together in 1975

The main topic of the piece is Smith’s younger sister. With the help of the rest of her family, Smith raised Kimberley in dilapidated surroundings. The barn that she speaks of literally did burn down as she held her sibling in her arms, scorching an image she would remember all her days.

Although the majority of Kimberly is about her younger sister, the line ‘some kind of misplaced Joan of Arc’ provides another glimpse into Smith’s spiritual side, with her religion being that of Rock and Roll. Seeing rock as being able to uplift people in a ritual state but without the credo that religion brings, Kimberly also shows Smith revelling in the liberation of the 1960s, where she found inspiration and support from the likes of Bob Dylan.

The 1970s saw a few unwelcome developments for Smith, such as the deaths of her peers Jim Morrison and Jimi Hendrix; the times had changed and so had the music. Smith was concerned about the state of the world she lived in and that her faith was being challenged: she had to do something.

Speaking of The Lizard King, Break It Up begins a trilogy of mythology as we approach the later stages of Horses. Inspired by a dream of Jim Morrison, Smith’s fantasy sees The Doors‘ lead man turned into marble in becoming a dead rock icon. It is perhaps on Break It Up that Lenny Kaye performs some of his coarsest work on Horses, perhaps influenced by its co-writer Tom Verlaine of Television fame, Smith‘s lover at the time.

The penultimate track to Horses is what some could call Patti Smith‘s magnum opus, the magnificently chaotic Land. Split into three parts, Smith has described the track as her paean to Jimi Hendrix, whose influence features both subtly and heavily in equal measure throughout the nine minute narrative. It is also perhaps the best example of how she fused together her love for both her literary and musical heroes. 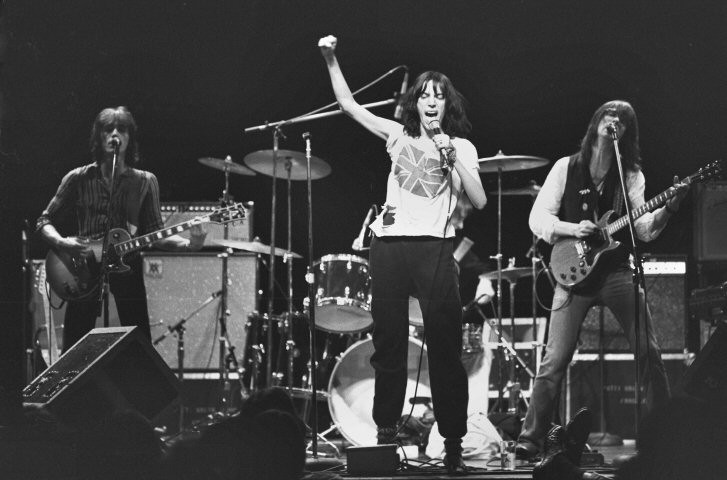 Land starts with a brutal description of male rape in the first part Horses, in which Smith creates shocking imagery with a real sense of tension in the way she describes the scenario. As the pace builds the chant of ‘Horses! Horses! Horses!’ crashes you into the next piece Land of a Thousand Dances. In a leap from the beat poetry earlier in the track, Smith dances on the tightrope between terror and jubilation.

Through the graphic saga, Smith pays tribute to one of her literary heroes Arthur Rimbaud but the main eulogy of Land is reserved for her idol Jimi. The final part of Land, entitled La Mer, has an affinity to the guitar god’s 1983 (a Merman I Should Turn To Be) in its audio wizardry. The final verse in the track is a wistful portrait of Hendrix’ demise:

“In the sheets, there was a man, dancing around, to the simple rock and roll song.”

The final track of Horses is by some distance Patti Smith‘s most detectable requiem to Hendrix. A deliberate reconstructed version of the word usually, Elegie refers to a poem of mourning in a befitting tribute to the great man. Recorded six years to the very night that he died in Electric Lady Studios, the shortest track on Horses even borrows a line from one of Jimi‘s songs as Smith mournfully expresses her sorrow over hushed tones. It is a solemn ending to one of the most unique records ever recorded.

Released in mid December 1975, Horses was ahead of its time by some distance. This was an album that, before the danger-charged offerings of The Ramones or The Clash, or even the brash Britannia bellow of The Sex Pistols, had created a new character that continues to inspire. As REM lead singer Michael Stipe once proclaimed, in Horses Patti Smith both musically and lyrically galvanizes you.

When Patti Smith released Horses, all she hoped for was to encourage people to be who they wanted to be regardless of their faith, colour or gender. That message still resonates today with the likes of Courtney Barnett citing Smith as being so inspirational in her music that she is due to play Horses in full later this year in Melbourne in her own homage to her darling. A fitting appreciation to the album’s 40th birthday celebrations.

Patti Smith may have inevitably grown up from that young innocent Chicago girl filled with enough courage to lead a battalion lyricists and performers, but her debut album has remained timeless and incomparable. Original, inspiring and symbolic, few albums have or will have such importance as Horses.