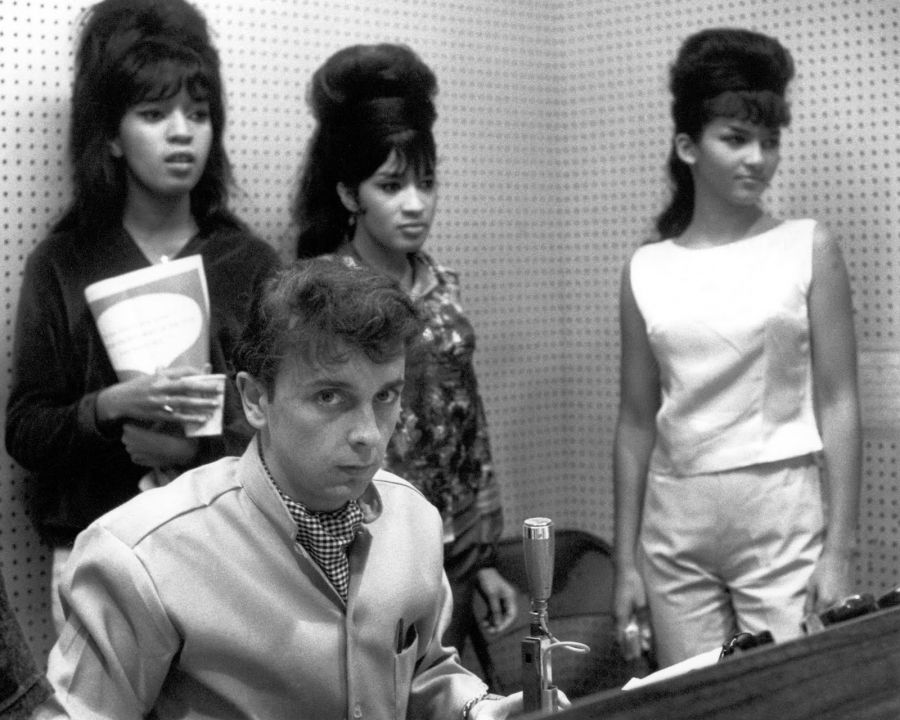 As rock & roll’s original bad girl returns to Liverpool, Getintothis’ Shaun Ponsonby looks at the diverse influence of 60s girl groups, from The Beatles to punk, via Winehouse and the LGBT community.

For, dear reader, it is this writer’s opinion that the girl groups since the golden era of the Brill Building, Motown, Shadow Morton and, of course, Phil Spector are missing a certain something. A je ne sais quoi. The Spice Girls might have thought they were posh, scary, sporty…erm…ginger and…erm…baby (this metaphor broke down much quicker than we anticipated), but has there ever been a girl group as glamorous as The Supremes? Has there ever been a girl group as tough as the Shangri-Las? Has any girl group member been able to sing like Phil Spector’s singer-for-hire Darlene Love? And has there ever been anyone who has encompassed the whole package quite like Ronnie Spector of The Ronettes?

The latter two of these badass women are making a comeback of sorts this year. Love has a high profile new album out, helmed by longtime E Street-er, Sopranos star and Apartheid-buster “Little” Stevie Van Zandt, with songs by some of Love’s fans; Springsteen, Elvis Costello, Joan Jett and the legendary Brill Building team of Barry Mann and Cynthia Weil. If the respect Love has within the industry isn’t clear already, the first video for the album’s release features cameos from most of these people, as well as David Letterman and Bill bloody Murray.

Ronnie Spector, meanwhile, has announced the first Ronettes album in around 50 years, and will be embarking on a rare UK tour this winter in celebration, with a show called Ronnie Spector Sings the Fabulous Ronettes that is kicking off at Liverpool’s Philharmonic Hall on November 28.

It makes sense for Spector to open her UK tour in Liverpool, given her close ties to The Beatles, and Lennon in particular. A fan and admirer of the group and Spector‘s productions, the two briefly dated when The Ronettes embarked on their first UK tour (where their opening act was the Rolling Stones, which shows you how massive an impact The Ronettes had made). The Ronettes were also The Beatles’ guides when they landed in New York for the first time. In fact, watch that footage closely, and you’ll notice Phil Spector gets off the plane right after The Beatles. She also recorded for Apple Records later in her career and had songs penned by George Harrison.

Between the two of them, Love undoubtedly has the greater voice. She was, and remains, an utter powerhouse. She can sing anything, and pretty much has. Joining the Blossoms in 1958, the group found themselves the most in-demand session singers in America. If you’ve ever heard a song by Sam Cooke, Dionne Warwick, The Beach Boys or even Elvis Presley with female backing vocals, chances are that’s The Blossoms you’re hearing. Even Sinatra…That’s Life? Yup, the Blossoms again. They did it all.

Then they came to Phil Spector’s Philles Records, but Spector being the weird, off-putting, controlling, walking freakshow that he is would constantly put their records out under The Crystals’ name.

The Crystals had a few hits by this point; Uptown, There’s No Other (Like My Baby) and – given what we now know about Spector – the haunting He Hit Me (It Felt Like a Kiss), but it was when Darlene sang He’s a Rebel and He’s Sure The Boy I Love that things really took off.

But Phil Spector’s Wall of Sound – or the “little symphonies for the kids”, as he put it – was cemented by one voice. And she is the original bad girl of rock & roll.

According to her excellent autobiography, Be My Baby: How I Survived Mascara, Miniskirts and Madness, or My Life as a Fabulous Ronette, when the former Veronica Bennett and her group auditioned for Phil Spector he jumped up, pointed at Ronnie and yelled “that is the voice I’ve been looking for!”

Does Ronnie possess the greatest powerhouse vocals of all time? No. Far from it. But she has something else. She absolutely personifies that entire era.That voice is one of the most distinctive in pop history. It has an effortless swagger, it’s tough, it’s sassy. It’s Ronnie. And it’s her voice that hits the home-run in arguably Phil Spector’s greatest creation, Be My Baby.

Perhaps it was his infatuation with the song’s singer, his future wife and obvious muse. Because everything about Be My Baby is perfect. Those opening thuds from drummer Hal Blaine are instantly recognisable, no matter how many people try to rip it off. To this day, nobody has ever been able to recreate that sound. And yet no matter how busy it gets, Ronnie remains centre stage, with her street smart New York accent still strong in her voice, her command of the microphone and the longing in her voice. “Say you’ll be my darlin’, be my baby now…”, and finally the signature “woah-oh-oh-oh” that would sound gibberish coming out of anybody else’s mouth. But in Ronnie’s hands, maybe says more than the English language ever could.

Brian Wilson became obsessed with Be My Baby, and is said to have listened to it over 100 times a day at one point, and spent much time afterwards trying to match it.

Ronnie’s name is perhaps larger than that of The Ronettes now. Her infamous marriage to Phil Spector – in which she was kept prisoner in her own home and led to her escaping barefoot – has become the stuff of legend, and her influence as a performer still looms. When she first saw a passing photograph of Amy Winehouse, she reportedly thought she saw an old picture of herself, such was Winehouse’s aesthetic obsession with Ronnie’s style. Even her singing voice had strong traces of the former Ronette.

Ronnie has also maintained a large following within the LGBT community. Many strong women have, the history of the gay icon is populated with many strong women.

Kirsty MacColl – who we wholeheartedly believe was one of Britain’s most underrated singer-songwriters – based much of her early material on the girl groups of this era, but would bemoan that many of the songs were written by men, meaning that the girls were singing from a male perspective. This probably wouldn’t make a great case for the girl groups being a great leap forward for feminism (least of all with songs like the aforementioned He Hit Me (It Felt Like a Kiss) ). But this could be a key component to prominent 60s girl groups standing within the LGBT community; the songs are often ultra-romantic fantasies sung to a boy, and written from a male perspective in a time where homosexuality wasn’t yet legal.

And yet, no matter how on the other end of the scale it might seem, the girl groups of the 60s also have an almost holy standing amongst the punks of the late 70s. You would expect that kind of holy standing for them in pop fluff. But…punk? Damn straight!

Albums from the punk bands were produced by girl group masterminds George “Shadow” Morton (the New York Dolls’ Too Much Too Soon) and Phil Spector (the Ramones’ End of the Century), The Damned nicked the “Is she really going out with him?” intro from the Shangri-La’s Leader of the Pack for their own New Rose. Ronnie Spector’s last album featured cameos from Patti Smith and the late Joey Ramone, who produced her version of the Johnny Thunders composition You Can’t Put Your Arms Around a Memory. The influence extends to the songcraft (see: songs like The Clash’s Hitsville, UK). This writer even saw The Replacements burst into a random cover of My Boy Lollipop earlier this year.

Why is this? Simples; they are unashamed, perfect pop songs with the attitude front and centre, which shares a definite kinship with the ethos of punk. That’s why the Ramones were able to cover Baby, I Love You with relative ease.

As much as the more snobbish amongst us may wish to deny it, great pop never goes away. It’s in the bones. The attitude, excitement, youthful exuberance and romantic longing of The Ronettes, The Crystals, The Shangri-Las, The Angels, Martha & The Vandellas, The Supremes, The Shirelles, The Chiftons, The Flirtations, The Marvelettes and all the others never ages, and it just keeps coming back, with an influence that stretches further than you might think.