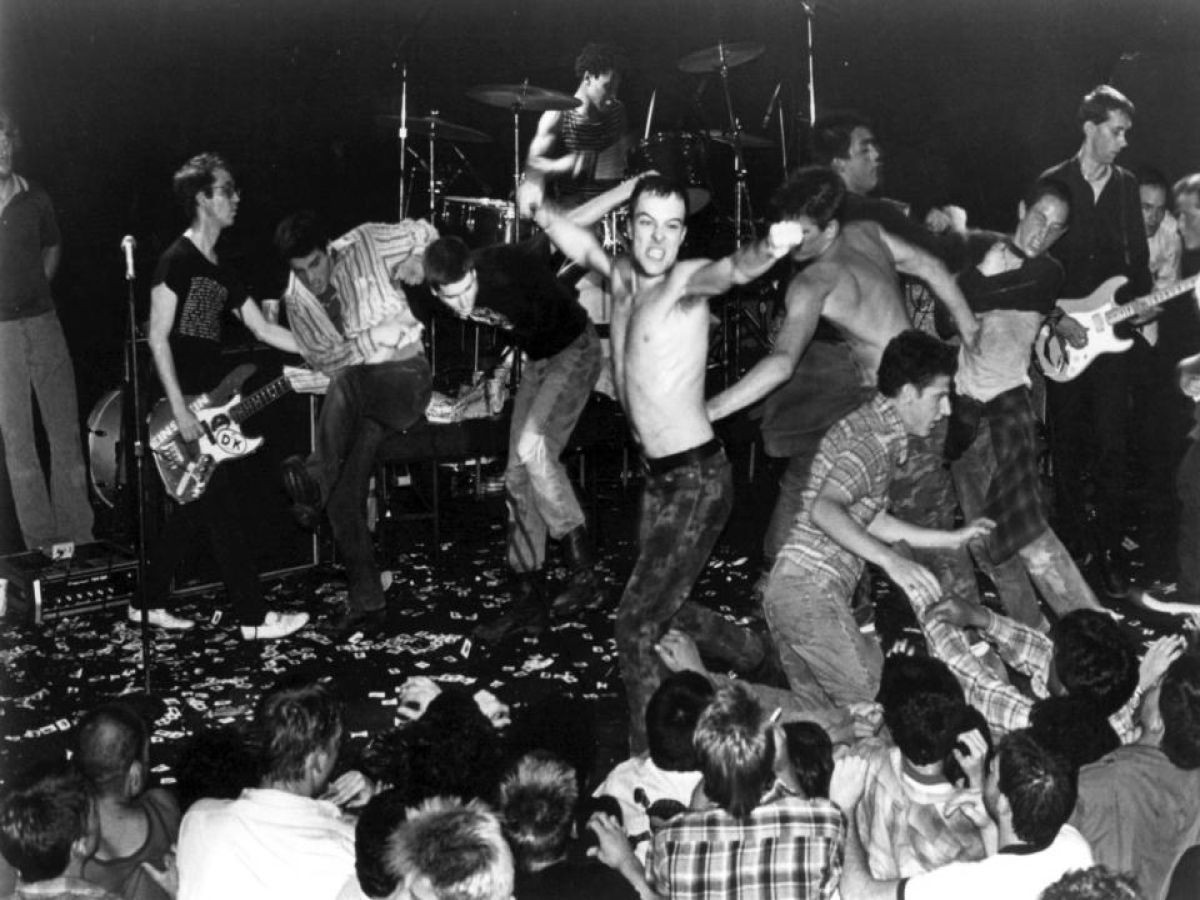 Dead Kennedys live in the 70s

2016 marks forty years since the first wave of punk birthed a rebellion in pop culture, Getintothis’ Zach Jones looks at whether the glory days have faded or if kids today still have distortion in their blood.

In the past few weeks we’ve been flooded by posts of outrage at the new CBGBs “lounge and bar” at New Jersey’s Newark Liberty Airport. The original venue closed in 2006, with a last show by Patti Smith. But in my mind this corporate re-birth truly sums up the state of punk rock today.

Forty years ago punk was fighting inequality, pro-war governments, the monotony of modern life, and a boring music culture, that was becoming so self-indulgent everything rock n roll had ever meant was being pissed down the drain. Now despite all of those factors still being very much prevalent, punk rock is also fighting itself.
Or to be more accurate, its re-animated corpse. Propped up by big media cash and watered down to sell the rights to kids TV.

Read our review of Dead Kennedys in Liverpool last year

Malcolm McLaren famously said the New York Dolls were “outrageously dressed”, now every football team in the Premier League has at least one player with a mohawk and sleeve tattoos. Ripped jeans are everyday Topshop clobber and you can buy faded Ramones t-shirts in Primark.

Punk has been well and truly branded.

It’s been sold off to big corporate video game companies, so kids in their garage can snap their video game controllers along to Guitar Hero and feel like their rocking out, while never getting off their arse.

How can any of the bands playing Warped Tour really claim to be fighting the system, when they’re sponsored by Monster Energy?

We’ve grown to accept corporate fingers in the pie and it’s understandably disheartening when so many front runners for the movement are seen cashing in. You need look no further than Iggy Pop flogging car insurance.

But let’s look at what punk did in 1976 to combat the ideology it opposed. It fought back, it dug its heels into the ground and refused to move. It made its own venues when no promoter would put them on. It made its own labels when none would release their records. It booked tours off fake telephone credit cards, when there was no cash to use and it became a scene of relentless touring and dedicated fans. True fans that lived for nothing other than the scene itself.

That, is what we still have today. Sure, you’re going to wince every time you see Chris Brown in his Municipal Waste jacket but if you’re looking at the mainstream for acknowledgement then you’re looking in the wrong place.

Punk was built to exist in the grimmest of toilet venues, basements and back rooms. For all the adversity it has faced, its authenticity has survived.

Did The Ramones really ruin punk? Read our take here

We still live in a world of recession, austerity measures and inequality. All the media grabbing of punk has done is force the artists to go harder, heavier and faster to become inaccessible to mainstream listeners. Where Black Flag may of once been considered heavy, we now have Converge, Trap Them and Ringworm blowing Keith Morris and co. away.

Every aspect of the scene is pushed until it can’t be pushed anymore. Artists asking how heavy can we go? How fast can we go? Or as GG Allin once asked, “how much human waste can I fit in my mouth before I puke?”

Now ask yourself, where would art be without those values? Without constantly wanting more? Without pushing the boundaries of experimentation?

The liberation of punk, simply existing for the sake of existing. Not to be a success, to sell out venues or write a hit record. Punk for the sake of punk. Is the closet example to the “art for arts sake movement” famed by Oscar Wilde, that we have in modern society.

It is not just punk that has been branded. All art has.

From dance music to cubist oil painting, our society gives everything a monetary value. With no economic price tag, things become worthless. Everything in this world can be packaged, and will be packaged, as a product or a service. The music industry, and punk as part of it, is no exception.

However what punk, and all those influenced by it, has achieved over the last 40 years is to exist in a sort of ‘nether state’ where it is still part of our music culture, but also free from it.

We have a tight network of promoters and artists, not just across the UK or across Europe, but across the world. Who still put bands on they’ve heard, who still make gigs as cheap as possible, who still play by the same ideals forged by the original 1976 punk movement.

It allows artists to exist as a band for years without having to be played on the radio, without having to have a record deal, or a manager. Bands like Demented Are Go, who have decades under their belt, a huge cult fanbase, and on top of everything a wealth of quality albums. But still remain under the radar for any mainstream music fan, and off the books of any corporation.

To list ridiculous mainstream approval, such as The Offspring getting a platinum record, or Green Day entering the rock n roll hall of fame is beside the point. Punk’s true success has been in inspiring generation after generation for forty years, to remain true, honest and down to earth.

It is the ultimate opposition to the growing force of the corporate establishment within art. It shows young bands that to be a success you don’t have to headline Glastonbury, and you don’t have to sell your soul. You can just exist as a band, and like The Stranglers, UK Subs and Buzzcocks, and still be doing it after 40 years.

Ultimately people are people, and you’ll get some who’ll do shite butter adverts if the price is right, and others who stay true to their craft. Those who’ve claimed punk is dead, just haven’t been to the right shows. Punk lives on in the fresh new bands who were inspired by the golden oldies, and that is true for any scene or art form.

Here’s to another forty years of sewn on patches, spending all night making your own ‘zines, and finding solace in the soundtrack to a world that can seem like its against you. 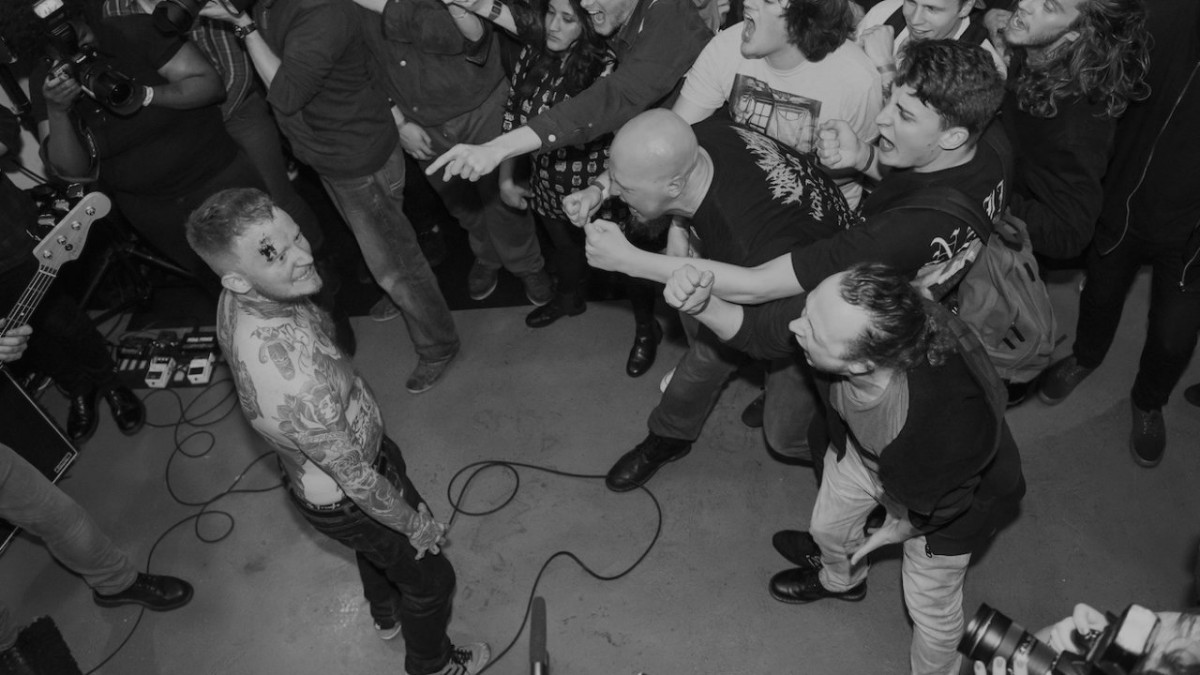 Frank Carter & The Rattlesnakes Live in 2015