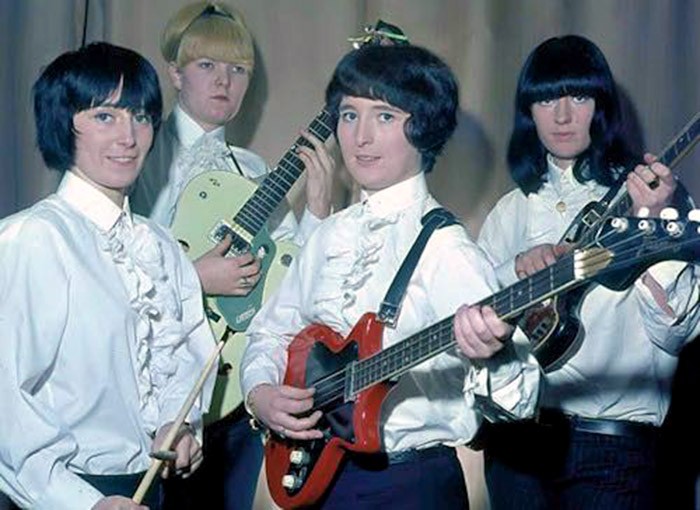 In the fifth Lost Liverpool, Getintothis’ Paul Fitzgerald investigates the story of four Liverpool girls who went to late 60s Hamburg to make their rock dreams come true, and had such a good time, they never came home.

As Liverpool’s music scene enjoys yet another fresh renaissance, ever developing and reinventing itself, there can be fewer indicators of the health of the city’s music than the positivity of having so many women involved. The music of this city, known for a disproportionate amount of time for its ‘gangs of lads with guitars’ limitations, is undergoing a regrowth, and a welcome turn about as more and more women front, play in, manage, and follow the music.

At the recent Liverpool launch of Dave Haslam‘s excellent Life After Dark book, which details the history of Britain’s clubs and music venues all the way back to Vaudeville and Music Hall days, in response to a question from the floor on the perceived under-representation of women in music, Revo Ziganda of EVOL mentioned how he so often found himself dealing with female booking agents and band managers, not to mention the amount of musicians and performers who are women.

It wasn’t always thus. As recent as the early 90s, in the wake of The La’s, when there were more A&R men roaming the streets than there were streets, women would’ve been cynically laughed out of the rehearsal room for even attempting to be seen as credible performers, songwriters or musicians.

Mary McGlory went with her friend and two of her cousins to see The Beatles play in 1962 at The Cavern. They were sixteen years old. The gig blew them away, and they were impressed by how easy The Beatles made it look. Within a couple of weeks, they’d started a band, called themselves The Squaws, bought their first guitars and drum kit, and had an article printed about them in the Mersey Beat magazine. It was at this point they realised. None of them could play a note between them. That was the end of The Squaws. More out of lack of any musical ability than the far more common ‘musical differences’ of nowadays.

Not to be deterred, and determined to show that they could do something, they didn’t rest on their laurels. The Mersey Beat article had been noticed by two other girls, Valerie Gell, and Sylvia Saunders. Val could play guitar and began teaching the other girls, and Sylvia had been taking drum lessons. So, after changing their name to The Liverbirds, for six months, they met every night after work and practised, adding singer Irene Green later.

Around the summer of 1963, at the age of just seventeen, The Liverbirds started gigging in and around Liverpool, often with bands such as The Kinks and The Rolling Stones. The Stones gigs gave them a taste for RnB that would stay with them. Sadly, soon after this initial brace of gigs, the band realised, as was so typical of the time, that they were being cheated by the booking agencies. Previously supportive and encouraging parents began to worry about their daughters, and singer Irene Green quit to form her own band.

About this time, The Kinks introduced the girls to Pam Birch, who was also a huge RnB fan, and she became the final piece of the jigsaw when she became the band’s singer. Another incredible, and amazing part of the story came next, when The Liverbirds played their unique part in the recording of what’s widely regarded as the first British heavy rock song, a true classic.

“The Kinks suggested that we go to London to meet their manager, so off we went. They booked us into a hotel and said that they were in the studio the next day, and that we should bring our guitars, as they may be time for us to play a song for their manager. Just after we arrived, their roadie came in to say that their van had been broken into and all their guitars stolen, so this is how it came about that we lent them our guitars, and they recorded You Really Got Me that day, with our guitars. After the recording was over, as a thankyou, we were allowed to record a song, and that gave us a demo of us playing ‘Reelin and Rockin’, with Dave Davies on guitar and Mick Jagger on maracas”.

The band returned back north to Liverpool. It was 1964, and the girls were still only 18 years old. An offer came in from Henri Henroid, then booking agent for the legendary Star-Club in Hamburg to audition the girls, and after a brief audition, they were offered the gig, a residency. The band were ecstatic. There was the obvious Beatles link, but at the time, all the major international stars were playing the Hamburg scene as well. This was just where the girls saw their energetic and punchy RnB sound going down so well, and it was exactly what they wanted. Both Larry Page, The Kinks’ manager, and Brian Epstein had offered to manage the band, but the girls decided to get the first 6 week residency out of the way first, and then consider their offers. After some work permit issues due to their age, they left for Hamburg on May 28 1964, and pretty much never came home.

The Star-Club had been waiting for this, the very first all girl rock band, to arrive, and the crowds treated them well. They raised the roof every night, playing to a packed room, and an incredible atmosphere. Hamburg loved them. And more importantly, this plucky gang of Scouse girls loved Hamburg. They signed a management deal with Manfred Weissleder, legendary German booker and partner of Jimi Hendrix‘s manager Chas Chandler. Within a couple of days, Weissleder called with a massive propostion for the girls to play with bona fide rock n roll legend, on of their heroes.

“A few days later, he called to say he was sending us to Berlin to play a big show with Chuck Berry, to see how our show would go down in other places in Germany. We would play two 20 minute slots. Shortly before we were due to go on, we were told that we weren’t allowed to play any Chuck Berry songs. We managed to do that for the first set, but when Val announced ‘Roll Over Beethoven’, the crowd of 7,000 people went mad, cheering and shouting. His manager ran onstage trying to stop us, but Val just pushed him away, and told him to F*** off.”

As a result of this show, Berry planned to take The Liverbirds to the US on tour, but Hamburg based Manfred didn’t want them to go, preferring them to stay in Germany where he could keep an eye on things, and of course, keep making money from this still most unusual Liverpool band.

“He said he’d leave the decision to us, but added that we might be booked to play Las Vegas, and that if we did, we may have to play topless. Of course, this was his way of putting us off going, and the Star-Club was still completely packed every time we played. So we stayed in Hamburg”.

The following years saw them recording two LPs, and four singles for the Star-Club label, as well as constant touring of Germany and Europe. In 1967, the drummer got married, became pregnant and decided to leave the band. Although a replacement was soon found, it was the first of several cracks in the girls’ unity, and the dream began to become more of a hum-drum reality. Or worse, a job. The fun was dissipating as the girls, who’d done so much growing together in such unique circumstances and at such an important and young age, began to crave the sheer fun of being in a band with their mates, and the experiences of years previous.

Yamaha took The Liverbirds on tour in Japan in 1968. By this point, their accomplished lead guitarist Valerie Gell left the band after marrying her German boyfriend and him being paralysed in a car crash, leaving just Mary McGlory and Pam Birch as original members. They decided, after this incredible few years, and still aged only 22 and 23 respectively, to call it a day.

Mary McGlory, married German songwriter Frank Dostal, and still runs a music publishing company with him in Hamburg. She has been instrumental in this story being told, and we’re grateful for her invaluable input.

“Val, Pam, and myself all settled in Hamburg, and Sylvia in Benidorm. In 2010, Ace Records compiled most of our recordings onto one album, meaning that nearly 50 years after we recorded those songs, they were finally released in England. This made us really happy, and especially Pam would have been so proud, as she wrote some of the songs. Sadly, she died shortly before the album was released. We are all still good friends, and get together as often as we can.”

The Liverbirds grew together, and flew together from Liverpool to a new life as Britain’s first all female rock band. Ties and bonds were formed by their incredible shared experience that could, that would, never be broken. It’s an all too rare thing even in this day and age, but to achieve such things in the early 60s, in a foreign land, is a story that should always be remembered and never be lost.