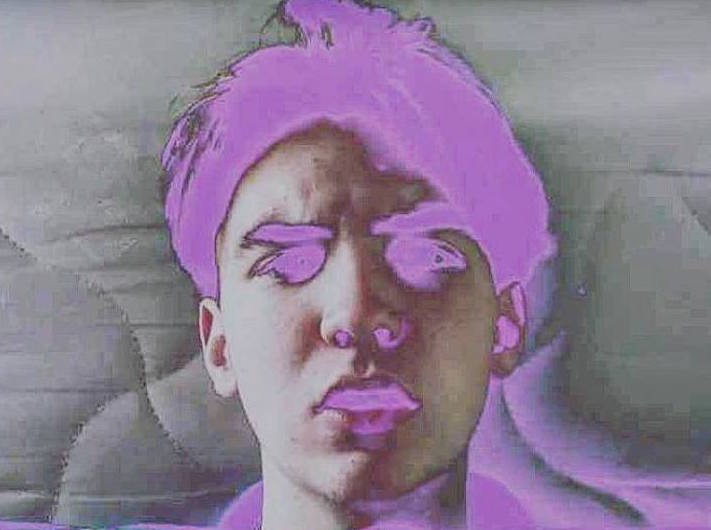 Shy but confident, reclusive but eager to connect, Getintothis’ Paul Fitzgerald looks at this most intriguing solo GIT award nominee.

L U M E N is Liam Brown, an obsessive collector of inspiration and ideas, with a deep and broad understanding of his own world, his own expectations. An inquisitive mind, an obsessive nature and a passion for developing his own ideas, in his own time, and under his own rules. There is no band. No collaboration. It’s unlikely that there ever will be. There’s very little mention of him online. The music of L U M E N requires no other people. It only needs Liam Brown. Relentless and scientific, but with a keen awareness of the career trajectory he seeks and wishes for. Liam Brown is 17 years old.

L U M E N is a Liverpool artist in attitude alone. This is not in any way the stereotypical and predictable sound of the musicians of the Mersey estuary. Though the attitude and assured delivery are undeniably of the city. The DIY ethic, his independence, and the self belief that is requisite in any solo performer is evident when speaking with Brown. While he may come across initially shy and retiring, reclusive even, he is anything but. It takes confidence and self belief, a knowledge of self, to produce music alone, without any creative input from others to carry this kind of project off. And carry it off, he does. “I wanna get away from that whole Merseysound thing, and stand outside of it, really,” he tells us. “Don’t get me wrong, the city will always play a part in where the music comes from, but for me, its really important for people to hear my music and not know where it comes from. I love that.”

Taking influence as a young child from his parents’ love of alternative and new music, jingles, and, strangely enough, the music of car adverts, he works away in his bedroom studio, creating sounds from old, welding and stretching ideas into shape, often with no idea of where each sonic journey will lead him. A style of working that requires much maturity and discipline, as well as a deep technical knowledge. The experimentation is where the drive comes from, organically, and without pretense or too much thought. “The beauty of it, for me, is in the spontaneity. Its the art. The creation, and the creative buzz. When I did Seabirds, I finished it in half an hour, and it was just that creative peak, and when you’re at that point, and it all comes together, that’s what its all about for me, Its the stuff I really live for, its organic, and it just happens. I try and start an idea every day, but it can only come naturally. I don’t wanna force it, cos. Usually its shit if you force it, if you try too hard.”

Seabirds is a tightly packed indie pop gem, with a relentless and insistent bass groove fed under a soaring heavily reverb-ed vocal, which finds Brown ad-libbing the perfect melody. Its a head spinner of a track, and just a small sample of where L U M E N is heading.

Quirky 80s inspired danceable pop grooves, led by deep analogue bass and drum sounds reminiscent of early Depeche Mode, Kraftwerk and New Order, overlaced with layers of shimmering indie guitar, and strong pop melodies are the order of L U M E N‘s day. Again, the wealth of inspiration and ideas lend the listener to believe that this is the work of an artist with more than just 17 years behind him. This is surely the main strength of Brown‘s work, the very thought that if this is just the beginning, what lies ahead could be, should be, and outstanding career. The quest to find new sounds is his mission, and he is devoted to the cause.

“I hate using clichéd synth sounds,” he admits. “But I’ll get one and then really mess with it to get it to do what I want. Effects and stuff. I love guitar stuff, but I love the electronica and how they can mix, and sit together. I love to merge it all. I love Beck‘s music, his use of samples and the variety. I always go to people like him as a good reference, in terms of how he puts it all together, the bass sounds, loads of other cool, quirky other sounds on top, everything. I love that.”

Musically, creatively, there are no collaborators. At this point, Brown is enjoying developing and producing the work alone, and content with that way of working as the format for what he wants to achieve. “I’ve worked with producers before, yeah, but its something I’m never really comfortable with, though obviously, trial and error, good to test it out. But I just love capturing that demo magic when it happens, so I just want to improve on my set up. get a good studio set up in my room so I can record full tracks. I never asked anyone to play on anything, never riffed with anyone, its just me in my room, day after day, getting on with it. Its all very hassle-free. I’m quite selfish about it, I suppose. I guess I never work with other musicians, cos I’m not used to it. I’ve never had the opportunity to. I like solo musicians, people like Badly Drawn Boy, and how he does things.”  .

L U M E N finally stepped out of the bedroom and onto the stage only six months ago, and Brown relishes the live experience, the exposure, and the connect with the audience. Recent shows with Loved Ones and Lying Bastards at Buyers Club, as well as Veyu and Rongorongo at Leaf, have strengthened his already gritty and steely determination to reach as many ears as he can, in as short a time as possible, and there are more performances to follow in the coming weeks, as well as festival shows during the summer. The live work is clearly something he loves. “Its unusual, cos its just me onstage, with my phone, a synth and a guitar. It works perfect for me, I don’t need a band, its more DIY, its just simple, sound checks take minutes, and its spontaneous cos I can just turn up at short notice with it all in my pocket. Its like a flat pack gig, basically. I can do it anywhere, and I love that. I mean it’d be always be cool to maybe play the synths live and that’s maybe something for the future. But for now, its just me and my stuff.”

While the GIT Award will undoubtedly bring more exposure, and more support, L U M E N is in no rush, preferring to take his time, and get it right, rather than flood Soundcloud with every single piece of sound that emanates from that Aintree bedroom. The drive, the strong will of Liam Brown when it comes to his music, is to take things slowly, and he sees no shame in being career minded. You’ll find Seabirds is but one song available publicly on L U M E N‘s Soundcloud.

“If you log into my account, you’ll see there are hundreds of pieces, demos and songs there, but I like the fact that I’ve only got Seabirds up publicly, and that seems to be generating lots of good interest. I like teasing people, leaving them wanting more. I’ve got nothing to bring out just yet, but when I do, I want it to be anticipated. It spices everything up a bit. I want to be strategic in terms of what I do with my music, and I’d like to build a career out of all this. I’m not in it for massive record deals, I just want to make music, but I love the fact that people all over the world can listen to my songs or videos. The fact that people enjoy my music, that’s my drive, that’s what makes me say, I need to do this.”

For L U M E N to win the GIT Award, would be an incredible thing for Liam Brown, but he feels honoured to have been nominated in the first place, and that he’s in such sterling quality company. For now, though, he’s happy to be dropping his wonky cosmic pop around wherever it lands, and for it to find happy ears somewhere along the road, and with still being just 17 years old, he’s aware that its a long road.

Listen to Do It, an exclusive new L U M E N track here