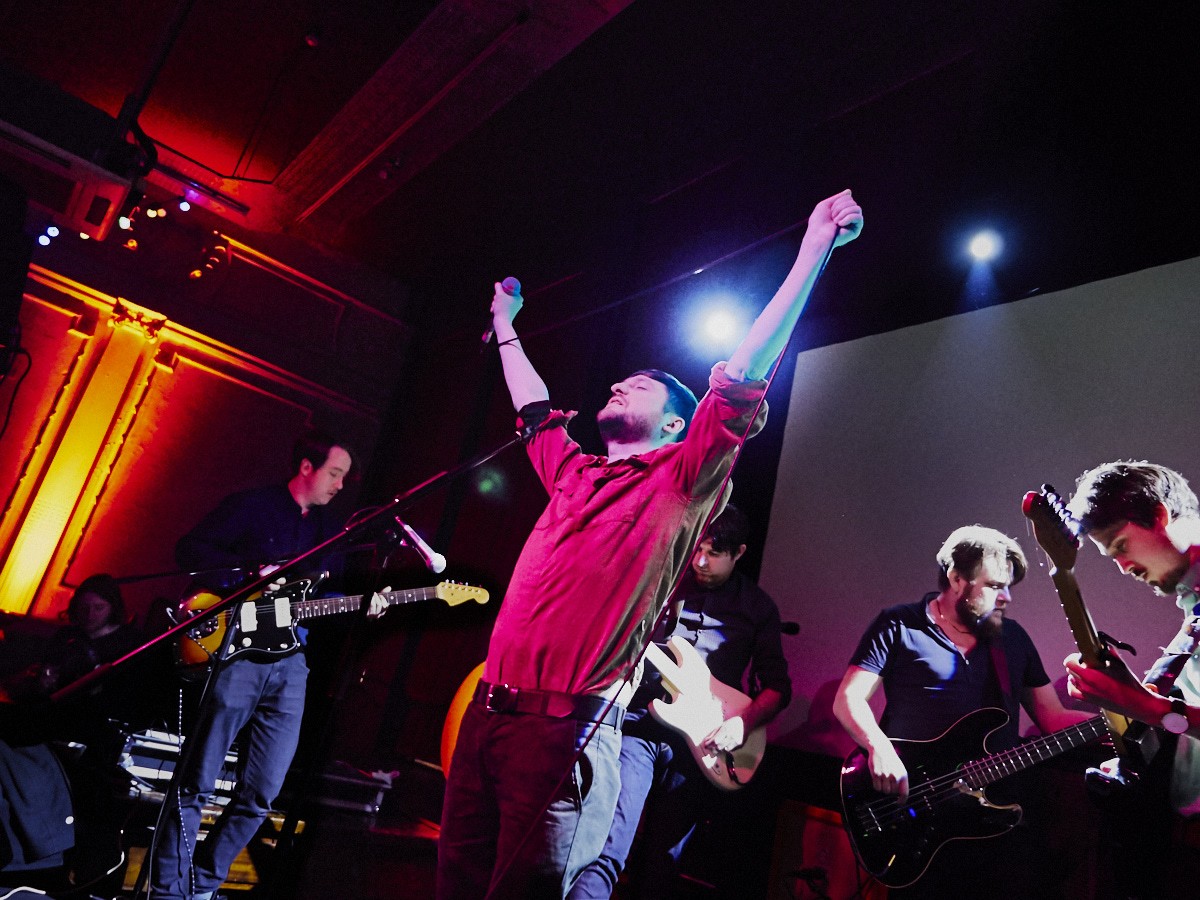 Though one of the newest nominees for this year’s GIT Award, Rongorongo have impressed at every turn, but as the band tell Getintothis’ Patrick Clarke, they’re only just getting started.

“It’s bizarro world, although I will take anything I can get my greasy hands on” says Rongorongo frontman Mick Chrysalid of their GIT Award nomination. Though it’s a reaction borne of surprise, not ingratitude, to both he and guitarist Jonny Davis Le Brun the nod almost seems a little premature. “I don’t think we’ve fully got across what we really want to get across yet” says Jonny. “It is really nice, but you look at Bill Ryder-Jones and Mugstar and you just think ‘yeah, it’s theirs’. The money would be nice though.”

The band allude to this being only the first chapter in what’s to be a diverse body of work, currently standing at only six tracks deep. Severe, detached, metallic post-pop, it’s a masterful, if slim, body of work, but the process remains unfinished. Recording as they go from their studio in Sandhills – “a big, fuck off industrial unit full of toys” – the group are leading up to a full length album to complete the first cycle.

“I honestly thought if we were ever gonna get noticed it would be next year” says Mick. “We’re quite happy with the first two EPs but it’s only six songs. Mugstar have been around for years and they’re getting bigger and better several albums in; Stealing Sheep just keep thriving and thriving. Being in the same ballpark as them is a bit bizarre. You’ll take it any day.”

It’s these two who form the core of Rongorongo, getting to know each other through Bido Lito! Magazine while each had their own projects – Jonny recording solo as Mitternacht, Mick with various outfits as well as production work. Beginning as a side project, with Mick on drums and Jonny on guitar, the band eventually became their major musical concern and they started adding members, settling on their current roster of Our Keith, Philip Chrysalid, Sam Gill and Alex Walker.

Their first gig, at 24 Kitchen Street supporting Strange Collective, saw the group still in development, yet we were there to commend their blistering cuts of guitar and shadowy choruses. They were yet to add Gill and Walker to their final line-up, so Mick took on lead vocals simultaneously alongside newly-learned drumming duties. “It was a bit of a struggle, he had headphones on and it was cutting in and out” remembers Jonny. “We learnt very quickly that we don’t want [Mick] singing and on the drums at the same time, he’s such a personality, it’s a bit of a waste.”

The gig showed masses of nascent promise from Rongorongo, and with Gill and Walker completing the lineup, the six-piece found themselves blessed with a rare chemistry. “When you get in a band everyone just turns up and does what the fuck they want, you never get to the point in your own head because everyone’s just doing their own fucking thing” says Mick. “But this one was quite talked through, over and over again until everybody got it – when I talk about theorising I do actually mean drinking, We go to the pub and drink and talk a lot, but it does help. In the past that hasn’t happened; you just drink and never do anything.”

As the founding core, Mick and Jonny are de facto leaders of sorts, but it’s no dictatorship, each of the six-piece bringing their own ingredients. “Alex for example is very into Robert Fripp and Eno, lots of looping and controlled feedback, so he instantly brings in that long form sound, the droney stuff” says Jonny. “I bring lots of effects. I try not to sound like a guitar. Influence wise since I was 14 the Smashing Pumpkins have meant everything to me. Obviously Billy Corgan’s a massive wanker, but you brush aside his last ten years and it’s great; that lush, rich imagery. I try and bring that through the guitar, I try to create a universe through effects.”

“There has to be some sort of form to what we’re doing” adds Mick. “Otherwise, without being too pretentious about it, it just runs away from you. If you’ve got five or six people in the band, next thing you know it’s not what you had in mind, but this seems to be, I wouldn’t say its ever comfortable, but its got a form. The songs will end up sounding like Rongorongo, whereas in the past you can just end up sounding like somebody else, and who wants to do that?”

And it is most certainly their sound; a distinct, forboding edge to their leaden, analogue grooves prevails throughout their slim discography thus far. Yet from the start there’s been a distinct split between the group’s two faces. When the band dropped their first tracks in October of 2014, Shiver and Slice Of Heart, the former was at its heart a pop song while the latter leapt headfirst into a dark, twisted left-field. “It’s more the textures, the abrasiveness, the metalicness [that ties it together]” says Mick. “Whether it’s in an 8 minute song or we try and write a pop song, theres an industrial sound in everything.”

“We want to write music that we would listen to,” says Jonny, “which is in turns both accessible and then longform and a bit weird. It’s good to showcase the breadth of what you can do. I think we can do pop, but we don’t necessarily want to be defined within that because it’s not everything to us. In the same breath we don’t want to be defined as a long from experimental band.” “I’m not bothered whether it’s the four minute song or the nine minute, it’s in my brain as a similar thing. But as Bernie Connor said I could never shy away from pop music” adds Mick.

With their idiosyncrasies now established, the next step for the band is their debut album, perhaps following a third EP. Around half of the LP, Jonny tells us, has already been recorded as they’ve gone. “It’s ready when it’s ready. Then we need to release it. You get lots of different advice from different people about how to do that; you don’t want to fuck it up.”

“The next step will be trying to get more national press and then maybe some help distributing it to a wider audience – a few little bits internationally” says Mick of his plans for the group going forward, though he’s wary of getting the execution right. “I’m reasonably ambitious, but not to tow any line, because then you’ll fall back to it being 1996 again.

“There’s still going to be little bits of the industry that think it’s still in the past. Even ATP, that became like a zombie festival, slowly falling to bits, losing a limb each year so now there’s just a head rolling around somewhere in Butlins. Years and years ago there used to be these advancement deals, you’d be signed, but then you’d immediately owe a mortgage. If you didn’t sell the records the four of you in the band would have £30,000 of debt each.

“I think being musicians in Liverpool we once used to look to the South. Especially in the mid-noughties there was this idea that the cavalry were coming over the hills waving a chequebook. The best thing that ever happened was when everything fell to bits, not necessarily people’s lives but the music industry. Now, [when people say]‘have you made it? Have you been signed?’, well I don’t really care! We’ll do it ourselves”

As for what lies beyond that LP, it comes back to the idea of this being just the first phase in their ‘body of work’. Once this current project reaches its natural conclusion – the end of what Mick calls ‘chapter one’ – “we’ll run for the hills. We’ll do the album, probably a third EP, and then move on, because with people that I’ve liked, the golden standard was Bowie because he always ran off whenever it got too comfortable.”

The band, continues Mick, have already talked about prospective ideas for their second, and even third records, yet as to the specifics of where Rongorongo might  run next, “I haven’t got a fucking clue! You just know that you’ve got to leg it somewhere else. We’re not 21, all the eggs are up the wall and the basket’s been kicked down the street, we’re gonna be here doing it for a while.  There’s a lot more music to do.”