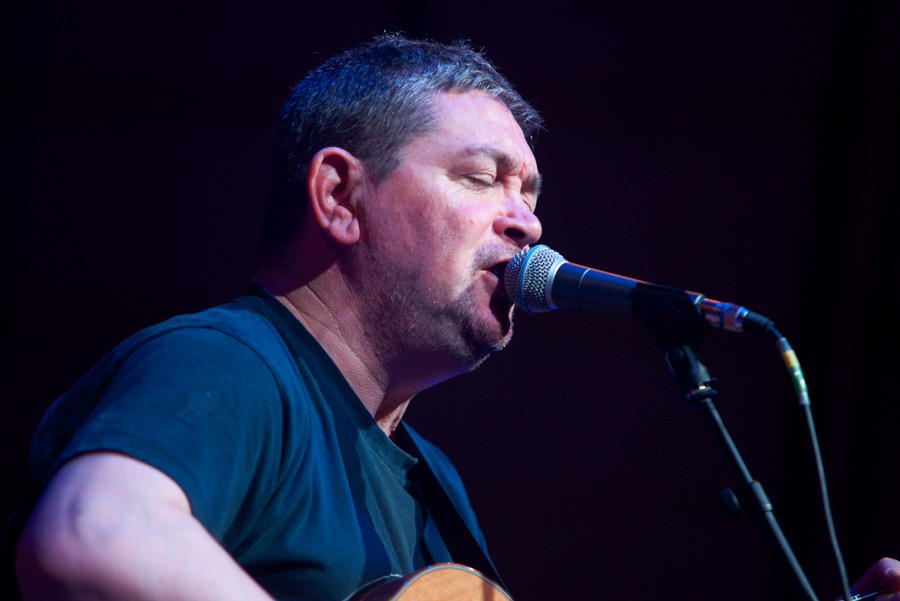 Mick Head and Sense of Sound

Taking us back to a wonderful night in 2014, Ian Salmon and Keith Ainsworth’s new Mick Head concert film wows a packed out cinema audience in Crosby, Getintothis’ Del Pike reports.

With a recent impromptu gig by Mike Badger at Waterloo’s Write Blend Book / coffee shop following a book reading, and more and more great bands (The Swingin’ Bricks, Xander and The Peace Pirates)  playing in the bars and pubs in the area it seems that this seaside suburb to the North of Bootle is becoming a social hub.

Not a month seems to go by without a new restaurant or swanky bar opening (No less than three Nepalese restaurants within a quarter mile!). No surprise then that a select collection of Liverpool music heads old and new could be found on a chilly April night finding warmth and culture in Waterloo’s unique Plaza Cinema.

The reason; the premiere of Michael Head and The Red Elastic Band – In A Wonderful Place, produced by long-time Liverpool impresario and playwright Ian Salmon (“as a challenge!”) and directed by GIT’s very own photographer Keith Ainsworth. The film documents the October 2014 gig at St George’s Hall, a much-loved event by all who attended that saw the unique Mr. Head performing a set of songs from his new project and old favourites from previous incarnations with Shack and The Strands.

There is a sense of novelty in seeing such a group of faces, usually seen around the bars and cafes of the City Centre sinking a pre-movie pint in The Liver. One of the oldest buildings in the area, a pub that still somehow retains an olde world farmhouse charm and has long stood as a landmark and as a favoured meeting place for Waterloo residents.

The Plaza itself is a perfect venue for the event. It opened in 1939 with Gone with The Wind and celebrated its 75th birthday last year with a screening of that very same film. The cinema has changed hands many times over the years and became tatty and unloved as The ABC, The Classic and The Cannon amongst other monikers but as The Plaza it has returned to its former glory. A community cinema, it boasts the cheapest tickets in town, showing latest releases for less than a fiver and is run by volunteers ranging from college students to old folks.

As tonight’s audience gather in the restored foyer it is great to see people looking around in awe of the box office and original fittings and fixtures, a recent toilet upgrade has embraced art deco and people emerge from the facilities beaming.  Most of us show our support to the project by buying a DVD copy of the gig before entering the main screen.

Read our review of Michael Head and the Red Elastic Band at Leeds.

The room has been beautifully restored with new seats but retaining traditional curtains, a brand new illuminated stage front that elegantly changes colour and a newly re-opened balcony. The Plaza is only one of two cinemas in Liverpool to retain its original appearance and take pride in its heritage, the other being the wonderful Woolton Picture House.

Ian Salmon offers a short introduction and with an awkward pause of a couple of minutes, accompanied by much sniggering, the curtains sweep open to reveal the equally splendid interior of St George’s Hall. “That was meant to look much cooler” cries Ian from the back.

Various audience members find joy in seeing themselves onscreen and recognising their friends, and this already begins to feel like a special occasion, a meeting of minds and an opportunity to show respect for this most enigmatic of singer/songwriters without him even being in the room.

The show starts with a nervously fidgeting Mick making himself comfy before launching into Walter’s Song, a sure-fire starter from Shack’s seminal Waterpistol album, made all the more special by Mick dedicating the lullaby-like song to his daughter. Flannery from the Fable Sessions album makes an appearance before a run through of Red Elastic Band tracks, Cadiz, Newby Street, Velvets in the dark and Koala Bears. There is a noticeable pride in these new tracks and Mick almost appears to puff out his chest during them. Any line fluffing is covered up with short Tourette-like cusses which never fail to raise a chuckle to those who know him best.

The bulk of the gig is then made up of a mix of new and old, calling on tracks like Meant to be from Here’s Tom with the weather that showcases the horn blowing talents of long-time Head brothers collaborator Andy Diagram. When Diagram breathes it is impossible not to become misty-eyed with thoughts of The Pale Fountains. Older tracks like Emergency from Shack’s debut, Zilch are always going to please true fans and the delivery here is as fresh as it was back in 1988, and without the much-maligned production values of Ian Broudie.

The big screen presentation tonight gives a sense of the warmth from the actual gig, undoubtedly more than playing the DVD at home, and as the show draws to its conclusion this passion is never more apparent. Hazy, Undecided, and Time Machine are all met with rapturous applause proving that Waterpistol was indeed a much-loved chapter in the Shack story and it seems that it’s all over too soon as Mick informs his admirers that his set list is done.

Never one to shy from repeating tracks in a single night, Mick and the band return to roars of delight to give the anthemic Newby Street and the Tijuana tinged Meant to be a second outing, much sharper this time around.

As the show ends the audience finally feels comfortable enough to applaud and the curtains close on a great night. GIT regular, Paul Fitzgerald spots the date; 1939 embroidered into the top curtain and announces “Its only twenty to eight, still got time for a pint”. The wit and the wisdom.

Ian Salmon takes a little time to thank the contributors who are here tonight including our Keith and we disperse into the foyer and the road outside to congratulate and discuss. Many photographs are taken of Michael Head’s name emblazoned on the Marquee, now gorgeously offset with the red and blue neon lights of The Plaza against the clear night sky. Most of us head back to The Liver.

The experience of seeing a gig like this at a cinema is a very different experience from the real thing but gives more of an opportunity to reflect soberly on the performance. With an artist as fragile as Mick, it makes you feel secure that he has already completed the gig successfully, particularly as this was early on in his current surge of live appearances and he is noticeably nervous throughout.  Only the odd line drop and minor fumbling fail to ruin an otherwise “Spot on la” (As Mick would say) performance.  A beautiful night in a Wonderful place within another place. There’s a Waterloo joke in there.