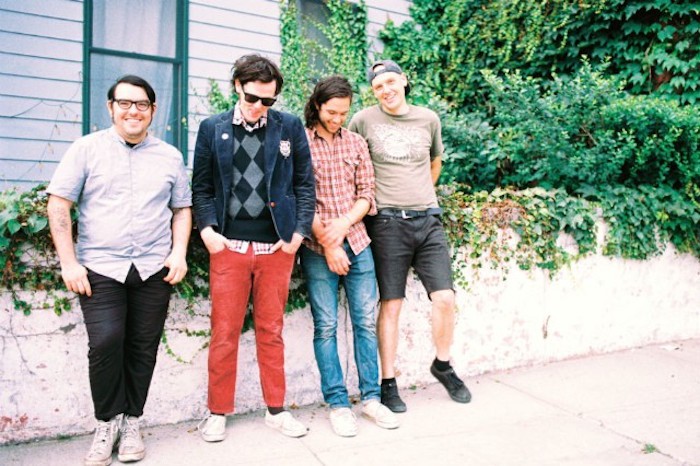 At the Arts Club where the walls dripped with sweat, Getintothis’ Connor Ryan saw a mixture of weirdness and passion courtesy of Weaves and Beach Slang.

Musically adept Canadians Weaves opened the evening’s proceedings at the Arts Club with a collection of catchy, yet offbeat tunes.

All the way from Toronto, with a self-titled EP behind them, they engaged us with abrasive Fripp-esque guitar wails, bold bass energy and tight drumming from Morgan Waters, Zach Baines and Spencer Cole respectively.

Lead singer Jasmyn Burke, although somewhat on the kooky side constantly wandering around the stage in a bit of a random fashion, possesses a singing voice that truly does justice to their songs, and in particular Candy (from the EP) which was so good, it stopped us in our tracks.

“Hey we’re Beach Slang and we’re gonna punch you right in the heart!” Now that’s a way to kick off a set! And what a set it was from Philadephia punks Beach Slang. Passionate and endearing, powerful, tight and ever ready to involve the crowd, their set started with a clatter and intense Noisy Heaven from their 2015 debut album The Things We Do To Find People Who Feel Like Us and they didn’t let up for a minute.

The audience roared all the words back to the band from the get-go and we were treated to them ripping through in quick succession, Ride the Wild Haze, Hard Luck Kid and a perennial loser tune, Throwaways.

Not content however to simply rest their laurels on that debut album, their covers of The Replacements‘ Bastards of Young and Jawbreaker’s Boxcar had the audience in raptures and amazingly took things up a notch or two higher. To top it with cover of The Cure’s Just Like Heaven was icing on the punk rock cake and led to scenes of mass semi-drunken karaoke.

Ending their set with future classics from their forthcoming second album, American Girls and French Kisses, Dirty Cigarettes and then wrapping things up with the simply stunning Young and Alive, Beach Slang sent us on our way with an alternative and high octane Wall of Sound that had to be seen (and heard) to be believed.

Dripping with sweat and confidence, Beach Slang are a band to be reckoned with; tight as a drum and well worth looking into. We loved them.