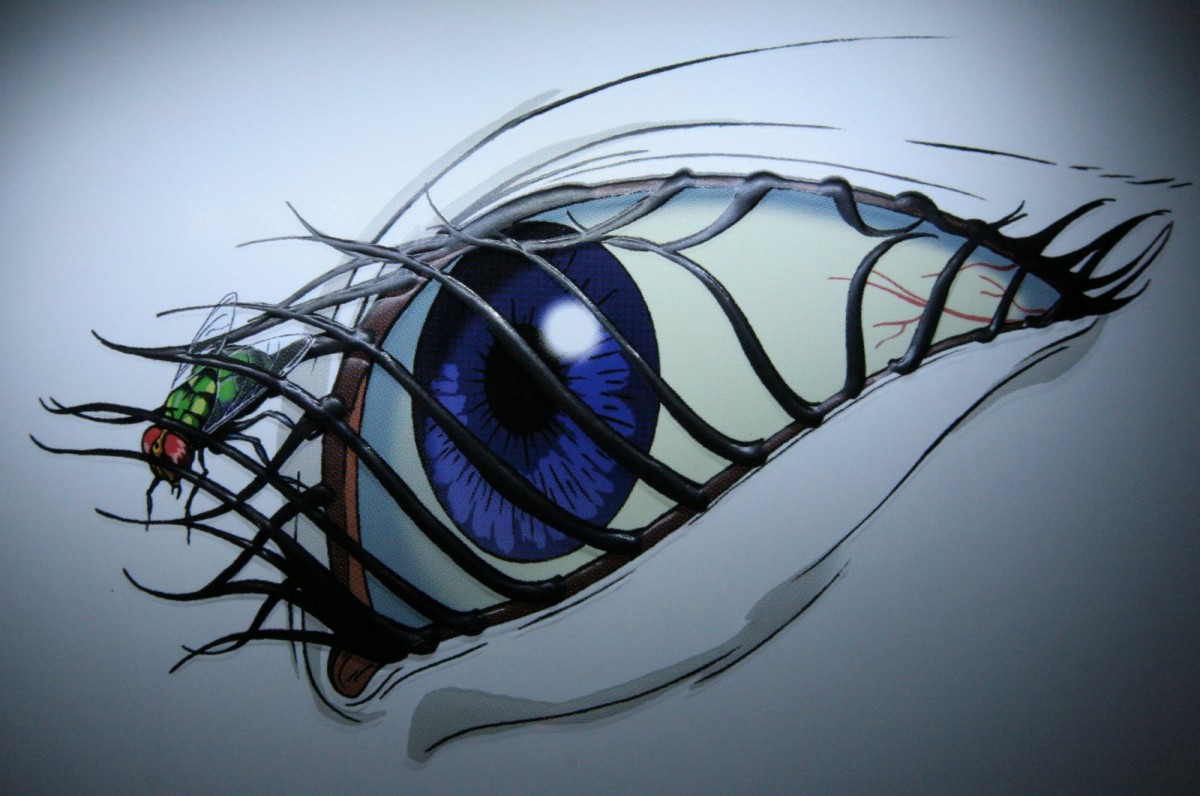 Serving as the inspiration for South Park and Bojack Horseman, Getintothis’ Martin Summerfield looks at the very best of Liquid TV’s most innovative cartoons of the 90s.

“We knew our audience loved the 10-second spots Colossal had been doing for us, so expanding to a larger format made a lot of sense,” says Judy McGrath, MTV’s senior vice president and creative director. ”Liquid TV doesn’t try to be The Simpsons. It’s got its own identity — fast-paced, funny, not completely polished. It’s a real comfortable fit for us.”

When we were impressionable whippersnappers, we didn’t have the mind numbing dubious dystopian release of watching acts of directed voyeurism starring non-celebrities – we had mind warping surreal cartoons with morally complex characters in amoral situations instead.

Liquid TV was originally aired on BBC 2 in 1990 as a way of highlighting animators such as Charles Burns, Bill Plympton, Art Spiegelman and Mike Judge through a series of short cartoons. This was later picked up by MTV and interspersed with music, with each cartoon lasting at most two minutes. In an interesting twist of fate, one of the later shows that would be spawned from Liquid TV’s creation with a similar background (i.e. originally a British pilot on Channel 4, later picked up and expanded by MTV) was Max Headroom, the pilot of which was focused on blipverts; small, compressed highly concentrated adverts that made the viewers heads explode. If anything could encapsulate the spirit of Liquid TV, it would be this.

The animated shorts were very much a product off their time. The grimy 90’s, in which everything was a rebellion and an experiment. Nothing was off limits and everything was permitted. It was dank, dirty and glorious, with shorts such as The Art School Girls of Doom which featured two drag queens on their quest to quell their hipster boredom. Even Beavis & Butthead started here before being successful enough to warrant their own show.

Speaking to the LA Times, creative director/co-executive producer Japhet Asher said “It’s zap-free TV. If you’re not liking something you’re watching, wait two minutes and you’ll see something else.” The shorts fitted in with who MTV was at the time and what their focus was, which was essentially promos rather than programmes – radio with videos interspersed with animation at a time when technology was advancing animation techniques and there was an appetite for the experimental on an experimental channel.

But then, perhaps predictably, the rot started to set in. Shows like The Real World, in which seven adults were filmed in an apartment in various states of loving, hating or downright tolerating each other. It was a mildly entertaining show that didn’t take much mental acrobatics to work out and was pretty singularly unique for its time. The weird thing is that The Real World started in 1992, around the same time that Liquid TV was in its heyday, so there was a time when both coexisted in relative peace.

Unfortunately MTV realised just how successful and lucrative reality TV following up with shows such as Catfish, 16 And Pregnant, The Osbournes, Pimp My Ride and a whole plethora of others that ultimately became their only focus and crowded out cartoons and animation eventually followed by their original remit, music videos itself. From 1995-2000 MTV played 36.5% fewer music videos. The music became the blipverts that the cartoons originally were, only now the main focus was the reality TV. MTV‘s then-President Van Toeffler said in a 2001 interview with Billboard Magazine; “Clearly, the novelty of just showing music videos has worn off. It’s required us to reinvent ourselves to a contemporary audience.”

Perhaps the popularity of the internet and the proliferation and popularity of music videos on You Tube is partly responsible for the death of the music video on MTV, but somewhere along the way MTV stopped being the bleeding edge and started being the knife handle. We should have all seen this coming when they removed “music television” underneath the logo and were experimenting with making movies. They splintered a single unique channel MTV into multiple channels; MTV 2, MTV Base, MTV Classic, MTV Dance, etc.

MTV brought Liquid TV back on October 13 2011, but it’s not the same. It’s polished and professional rather than indie and raw, weird for the sake of it without really saying anything and just not getting what made the original content so subversive and surreal.

There was one high point; Summer Gloo, an arse kicking blaxploitation heroine named Summer who saves Jonah – a rocker and speedracer – from being turned into a zombie for D.I.S.C.O (Demon In Satan’s Cruel Organisation!) with a vinyl in his chest. He knocks back an offer to race for heaven, and is interrupted in bumming around his trailer by Summer shouting “I’m pregnant – it’s yours, motherf****r!” before speedracing a demon and an angel. This sort of special lunacy is what exemplified the zeitgeist of Liquid TV and would have fitted right in during it’s heyday.

Thankfully, all hope is not lost. There’s still promise and some interesting toons in the new Liquid TV, so it’s definitely worth a watch and sifting through the dirt to get to the diamonds. Liquid TV paved the way for adult cartoons that weren’t afraid to take risks, shows like Wonder Showzen, Super Jail, Rick & Morty, Bojack Horseman and even South Park and Family Guy possibly wouldn’t have been greenlit if it weren’t for the daring innovation of MTV when it was willing to take chances.

Nevertheless, to deny that there was a golden period would be preposterous. So, in the spirit of that, Getintothis presents the Top 5 cartoons from Liquid TV‘s glory days (in no particular order).

Is The Simpsons the defining artistic work of our times? Getintothis’ Shaun Ponsonby makes a perfectly cromulent argument.

Imagine if Austrian painter Egon Schiele decided to drop acid and write Flash Gordon in the Buster Crabbe era, but instead of a blonde 50’s space adventurer our hero is a woman dressed in strategically placed leather bondage bandages who runs and guns through a steely factory warehouse with an item she’s stolen whilst a jarring trumpet fanfare plays. Aeon is a secret agent/double agent/agent provocateur by turns, constantly clashing with her antagonist/lover, Trevor Fairchild, a Lex Luthor figure with megalomaniacal ambitions upon the human race.

In the Liquid TV shorts there is no dialogue, allowing the music (atmospheric synths and clashing xylophones) and sound design along with the bizarre cinematography to tell the story and do all of the heavy lifting. In almost every short she dies in the middle of whatever bizarre mission she has set out upon.

“She’s a white trash valkyrie straight from the edge of ruin!” A puppet show about a female Hell’s Angel in hot pursuit of Crow, her lover/antagonist (seriously, this seemed to be a recurring theme within Liquid TV) after meeting and bonding as children in a repressive orphanage and being separated. Lewd, crude and unabashedly fun, Winter commits numerous crimes like an exploitation Incredible Hulk, wandering from town to town seeking Crow who is also seeking her.

Psychogram was comprised of brilliant spoken word picture postcards from a deranged sociopath ranging from “Dear mum, I lost my virginity as planned…” to “Dear mum, destroyed the oil rig as per the assignment…” over an almost Twin Peaks-ish soundtrack.

Art Spiegelman, artist of the amazing graphic novel Maus, did a series of shorts which combined the best hardboiled tropes with gangster flicks and mysticism with a diverse and weird cast of characters, all manipulated behind the scenes by invisible hands. One episode has a man abandon his rooster costume in a masquerade only to be shot by a man in a cat mask, whilst a sinister shimmering man in purple speaks in sibilants over a Bakelite telephone “Yes, exactly according to plan…” The music is pure sultry jazz and blues.

These were shorts by Bill Plympton, who was a formative influence on a young Matt Groening. It often featuring cartoons with two old men pulling each others noses to outrageous proportions only for them to snap back and slap them in the face like a rubber band.