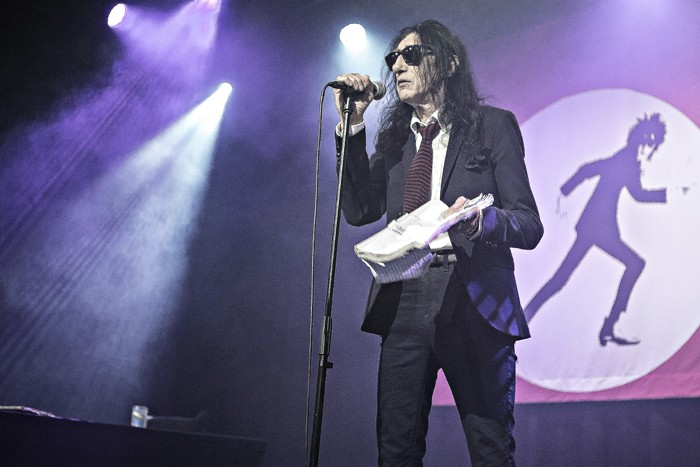 Dr. John Cooper Clarke drags his spindly frame to Liverpool, and Getintothis’ Del Pike was there to witness more than one poetic genius.

John Cooper Clarke has recently attracted a new audience via the inclusion of the cover of I Wanna Be Yours at the end of the Arctic Monkeys A.M. album. This is evidenced by the eclectic band of fans trundling into the sweltering fug of Mountford Hall. Clarke himself notes “I don’t like being cold but this is fucking ridiculous”. The audience is still dominated somewhat by 40 years plus couples of a certain hairstyle who have followed The Bard of Salford around since those heady days of Mancunian splendour, when he was part of the ensemble which included Tony Wilson, Joy Division and The Fall.

The spirit of that era is immediately captured by Clarke’s first guest tonight, the incredible Mike Garry. A Mancunian everyman with a poetic talent that simply threatens to take the spotlight off the main act within minutes. He has been touring with Clarke for years and as his work unfolds this marriage of Mancunian minds makes sense. He opens with a safe bet, a poem that exudes his love of Liverpool, name checking so many streets and pubs with affection and awe, he wins the audience over with ease.

But then the poem takes a U-turn into a much darker tale of his own city, drawing a comparison between both locations like a bleak Ying and Yang. Penny for the Guy is even bleaker, Jesus, this is bleak! Garry is immediately likeable though and talks with much love about his kids and his teacher in the heart stopping Signify (required reading for anyone considering Primary school teaching).

His closing St Anthony, a piece about Manchester’s heroic impresario, Tony Wilson is delivered in an A to Z structure that covers acres of Manchester’s cultural history in about four minutes. His rapid delivery, not unlike Clarke’s leaves the audience speechless. So astounding is St Anthony, that last year just about every Mancunian worth their salt (plus Iggy Pop) collaborated on a stunning version that serves as a perfect tribute to Wilson from those who knew him best.  Have a look for yourself if you don’t believe us.

A bonus guest tonight, Jeffrey Allerton might be more familiar to Radio 4 listeners, but fans of The Fast Show, Dave Angel and The Life of Rock with Dave Pern will have immediately recognised comedian Simon Day beneath the cap and glasses. Painfully funny poems with such blunt titles as At the Gym, On the Train and England, deliver belly laughs while ridiculing pre PC attitudes of light entertainers effortlessly.

On the Train presents a brilliantly hilarious tour of a train carriage with a dozen or so well observed characters who you would never wish to meet. The character of Allerton is a hybrid of John Shuttleworth and Count Arthur Strong and deserves a larger audience, perhaps like those characters making a leap from radio to TV. It’s light relief from the much darker Mike Garry and a perfect taster for the comic genius to follow.

A short break and an introduction by JCC cohort Johnny Green, and Dr Clarke emerges to pounding 60s spy music with his trademark explosion of wiry hair (flatter than in previous years) and skin tight suit. As usual he begins by reading out the guest list. It’s a well-tuned poem that name checks what feels like a hundred characters and has everyone chuckling.

This writer’s fears are confirmed before long however, as the set is virtually identical to the support slot Clarke delivered for Squeeze last year. It’s a bit cheeky considering the almost £30 ticket price but it doesn’t appear to dampen the mood too much as he is given a hero’s welcome and every joke and poem is rewarded with rapturous applause.

The charm of the man is paramount and we all know he has lived a life that would finish off more robust figures, so we hang on to his every word, even if we have heard it all before. The poetry demands repeated listens anyway, how can anyone possibly take in every word of the 100mph Beasley Street or its updated Beasley Boulevard?

Read about fellow Mancunians, The Smiths on the 30th anniversary of the seminal The Queen is Dead album.

The more serious nature of the punk era Clarke where Beasley Street first saw light is now bumped aside by lighter more comedic poems like Get Back on Drugs you Fat Fuck that tells of his (imaginary) weight gain and Bedblocker Blues, a hilarious attack on the NHS that balances humour perfectly with more serious diatribe. Hanging Gardens of Basildon and PC Gone Mad are delivered in a bizarre Essex growl, the latter telling the tale of a deranged copper akin to Irvine Welsh’s Bruce Robinson character in Filth. Playing with the term PC clearly gives Clarke much pleasure “I went into PC World the other day, you have to be careful what you say in there”. Brilliant.

A scattershot reading of Evidently Chickentown with its countless “fucks” is a perfect counterpart to Some C**t Used The N-Word, and both are a testament to Clarke’s fascination with language, however bold. The latter causes some audience members nearby to squirm in their seats but Clarky tells it like it is.

It’s difficult to work out if I’ve Fallen in Love with my Wife is meant to be sarcastic or a genuine statement of glee from a man who has finally found happiness after many a failed attempt “A failed marriage always leads to a successful divorce” he quips. A little research reveals that he has been happily married to his current wife Evie for nearly 30 years.

His gags are as much a part of the act as his poems and they are plentiful. Jokes about “hookers” (his words not ours), Jews and nagging wives might be more suited to Bernard Manning if they weren’t delivered in Clarke’s ironic and world weary manner.

An immediate encore – two seconds behind the curtain, (“I was going to follow protocol but it involves a staircase”) – is dedicated to Alex Turner to whom Clarke clearly owes a great deal of his recent resurgence to. After much praise for the singer, Clarke finishes off with his original “romantic” reading of I Wanna Be Yours with legs wrapped around the mic looking like a cross between Julian Cope and a stick insect.

Clarke may have been the glue that held the Manchester scene together in the late 70s and it’s incredible that he is still doing his thing with the same amount of vigour and vim decades on. As long as he has that energy and the power to reduce us to tears, he’ll always be a welcome visitor from the other end of the M62. 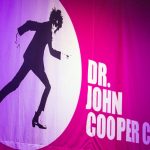 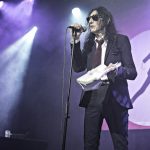 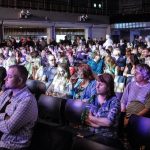 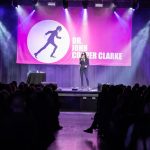 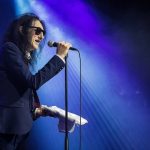 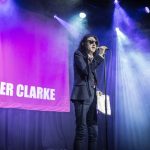