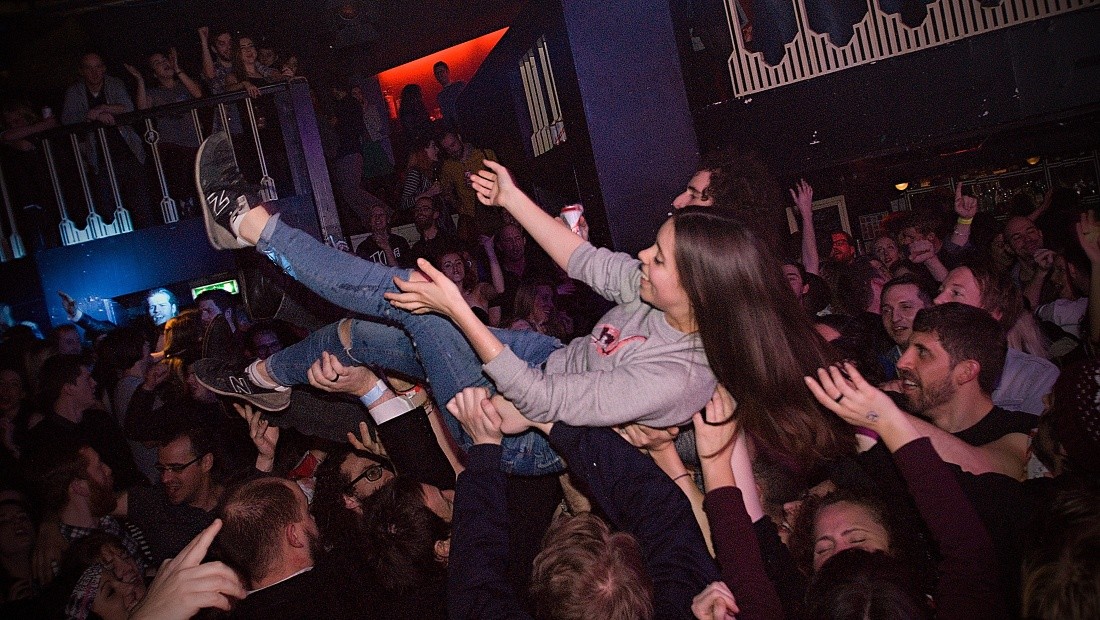 A fun night at the Kazimier by Chris Flack

Everyone’s had a gig ruined by attention seekers in the audience, so Getintothis’ Andy Holland makes a curmudgeonly list of common complaints.

There’s nothing better than watching an artist working a crowd and being inspired to greater excellence by their response. But we all have stories about gigs being ruined by poor gig etiquette in the audience.

It happens way too much, doesn’t it? Particularly at big name gigs that pull in people who don’t often attend live music events, but it happens at others too.

One of the people I most admire is Larry David (of Seinfeld and Curb Your Enthusiasm), because he understands the need for rules. Without rules society can break down. Yes, I think some sort of Dos/Don’ts guide to gig etiquette ought to be compiled to stop this sort of behaviour from happening, and I nominate myself as the person to compile it. Here’s what I’ve come up with so far.

The gifted conversationalists who think what they have to say is of far greater consequence than what is happening onstage. If you want to talk, go to the pub or home, whatever. Just make it as far away from us as possible.

That isn’t some sort of human jukebox you are watching, you know. This is a gig and the biggest clue to what the artists are going to play is the fact that they all have set-lists in front of them. Also, if they do ask for requests, shouting out for a track that an entirely different artist performed – or indeed, something by a band the artist you’re watching used to be in – isn’t going to make you appear clever, or endear you to anybody.

This is not a campfire or a church fete. Kill-joys we may be but gigs are for the artist to perform, not you. In 2016, you’re always at least six feet away from a karaoke bar. Off you pop.

De rigueur at punk gigs, once upon a time. It’s best enjoyed by young and skinny people though. If sweaty, middle-aged men indulge in it we feel an overwhelming urge to call for a nurse. It’s a health risk to them and those in their immediate vicinity. Plus, they do not know this, but it looks hilariously camp.

Taking a couple of snaps is okay. Filming the band for the odd song is acceptable too, social media shares are great news for any new band. But when random people start setting up camera equipment, it’s taking the piss and called bootlegging. Plus it’s annoying.

Part of the gig experience and can be entertaining. There is a cut-off point though. If you’re the type of person who goes to comedy gigs and thinks you’re funnier than the professional comedian onstage, trust me, you’re not or you’d be getting paid to tell your own jokes by now.

It’s usually when an artist is singing their most sensitive and heartfelt song that people toddle off noisily to the bar and loudly order their drinks, their return journey even more obvious. A very obnoxious way of saying “look at me”.

The majority of venues don’t always sell reasonably priced drinks. It adds insult to injury when you see people who happily fork out a small fortune for one and then lob it into the crowd, drowning everybody in its path. We would take this complaint a stage further though. Why throw anything? Like coins, for example.

And while we’re on the subject, we think that the person who threw a wellington boot during I Am The Ressurection at The Stone Roses gig in Heaton Park ought to be sectioned because it clobbered a friend of ours on the head and she needed treatment by St John’s Ambulance.

Waits until an artist is singing the most intimate part of a slow number to shout out things like, ‘Go ‘ead, lad!’ What are people like this expecting? Do they expect the artist to invite them up onto the stage and sing a duet with them? Ain’t gonna happen.

Plan your next gig with our Gig Guide – Just don’t talk through it, ok?

This is the classic. Those only interested in the main act and spend all their time prior to that the bar, but expect to be right in front of the stage for the headliners. Determined, they barrel their way through the audience, sod anyone in their path. So, to these large, giant men on the front row, most times you are standing in front of women much shorter and narrower than you. No chance of them seeing the band, with your huge arse blocking the view. Have a word with yourselves, lads.

Also – blokes who decide to lift their girlfriends onto their shoulders, so no one behind can see – everybody hates couples like you two.

In Liverpool everybody is in a band, or has been at some point. And so, many turn into experts, issuing well intentioned yet ridiculous tips. And while it is perfectly true that every guitarist has a preferred gauge of strings and so on, there is no magic type that works for everybody. Most of all, there is no band anywhere who appreciates advice about stage-presence from some random stranger in the audience. There’s a reason why they are on stage and you’re not. The truth hurts, we know, but button it.

Some bands have roadies to set up their equipment for them but many do it themselves. What they don’t want or need is some random drunk “helping” them with their beloved gear. That guitar, amp or pedal is probably the most expensive thing they own. And that singer up there, he doesn’t want you to hold his mic stand for him while he’s performing. He’s a grown man, can manage all that himself. Leave it, eh?

People who take the contents of their house to a gig, then dance about in front of us with their rucksack on, jiggling about, causing potential wounds to anybody unlucky enough to be standing behind them. It’s not exactly cool look either. People who do this resemble Old Prospectors during The Gold Rush.

Why pay to get into a venue to watch a band perform and then spend the whole night taking selfies? Get over yourself. Alicia Keys is so fed up with you lot she’s going to start confiscating your phones until the end of the gig.

And I use the term loosely. Very similar to The Raconteur but this particular gasbag (usually male) often confines his demented chit-chat to the history of popular music. His voice will be heard non-stop throughout the gig and all of his comments will be bitter and negative.

Giveaway signs are the fact that most of his conversation will consist of phrases like, ‘They’re alright but they’re just ripping off Joy Division…’, ‘I was talking to Mark E. Smith the other day. He looks shit…’, and ‘Their early stuff was better. The first single was the only decent thing they did…’ They love name-dropping too. Boy, do they love that. Also, The Expert is the first person to grab the set-list when the band/artists have finished, even if he has been loudly complaining about them throughout the gig.