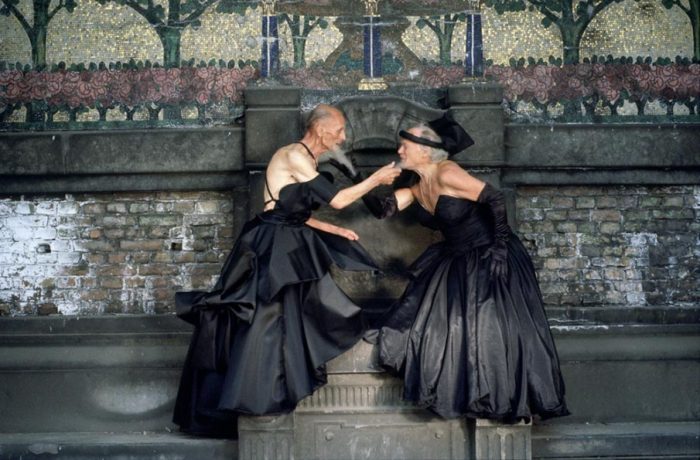 With one of the most mysterious cult movies of all time receiving a very rare screening at FACT, Getintothis’ Del Pike takes a look back at the history of “Freak” Cinema.

This writer is particularly excited, having only seen clips and devoured production notes and reviews, this is a film that very seldom gets a screening. Don’t expect an easy watch though, there are clear reasons why this film has been kept under wraps, a cursory glance at the publicity stills alone make for uncomfortable viewing with a naked dwarf painted as a Dalmatian and chickens with baby doll heads.

The film fits comfortably with the midnight movie culture of Eraserhead, Pink Flamingoes, El Topo and Sweet Sweetback’s Badaassss Song, that group of films that sit even on the outside of alternative film, never mind the mainstream. It is also an example of one  of the most niche of cinema sub-genres; Freak Cinema.

The subject of the freak in cinema has been long debated and is essentially an extension of the freak show culture that was transferred from the bygone day boardwalks and carnivals to cinema screens with Tod Browning’s Freaks in 1932.

The major debate that has followed freak show cinema since Browning’s film has been the representation of the disabled as “freaks”, a definition that is troublesome in its name alone. An exploration of the life of Joseph Merrick, himself the subject of  David Lynch’s 1980 film The Elephant Man reveals however that in the days of abject poverty and workhouse existence, the life of a carnival freak was favourable to the majority of other work choices. The definition of representation of freaks and that of disabled people needs to be separated; these are generally people who choose to be regarded as a spectacle and respected as such.

Merrick himself escaped the workhouse by saving his earnings, and setting himself up in business as “The Terrible Elephant Man” due to severe bodily deformities that worsened as he grew older. Merrick’s condition is still under scrutiny as his DNA continues to be analysed. Lynch’s fictional narrative of the cruel manager, Bytes, who brutally beats Merrick throughout the film further adds to the myth that carnival freaks were nothing but slaves. The true history of Merrick reveals that the term freak may be more of a victim of exploitation than the individuals themselves.

Harry (Doll) Earls, the dwarf star of Freaks became, along with his co-star sister Daisy, a highly paid Hollywood star. It was clearly the miniscule build of Earls that shaped all of his roles, including appearances in the early Lon Chaney talkie The Unholy Three (1925), Laurel and Hardy’s Be Big (1931) and as the lollipop sucking Munchkin in The Wizard of Oz (1939).

Rumour has it that he had a house built to scale for himself and his sisters, complete with miniature white goods, wardrobes and beds. Earls  may have cut a comic character but he was no fool. In 1930s Hollywood, the freaks may have been calling the shots and gaining control more than they were given credit for.

The fascination with little people continued and reached absolute extremes with films like Sam Newfield’s The Terror of Tinytown (1938), a comedy western with a cast made up entirely of midgets. The most amusing aspect is that the budget would not stretch to a set so by using an existing backlot, the cast stroll into bars beneath the saloon doors and stand on boxes to be served. Fortunately the budget did stretch to Shetland ponies.

A more sinister take on the theme emerged in Werner Herzog’s disturbing Even Dwarfs Started Small (1970). Herzog’s usual attack first / explain later approach is at the fore here with an island of dwarves in rebellion in a series of episodes that include the merciless killing of a pig and the sacrificing of a monkey. Shot in the bleak ashes of Lanzarote, the film, despite its comedy status, is a depressing experience even for the most diehard of Herzog fans.

The fascination with freaks in cinema does appear to have started with Browning’s Freaks back in 1932, a film that still manages to shock to this day. What appears to be a melodrama about a wicked circus starlet, exploiting a little person by marrying him and then attempting to poison him to get her hands on his money, turns in the final reel into an effective and harrowing horror tale.

What remains horrific is the fact that all of the circus freaks are real, and although they are given warm and likeable character traits throughout the bulk of the film, by the end they are as much a monster as the Universal attractions of Dracula and Frankenstein at that time.

The sight of Prince Randian as The Human Torso (no arms or legs) wriggling through the mud during a violent thunderstorm with a dagger in his mouth, is a deeply disturbing image, as is the wedding feast where the “freaks” first show signs of rebellion, taunting the bride with “One of us, gobble gobble”.

Get your movie fIx here at Getintothis‘ home of film

Browning’s own experiences in the travelling circus appeared to give him licence to exploit and he was given a certain amount of freedom following the success of Dracula that he had directed the previous year. Audiences and critics were shocked and offended however, with The Hollywood Times stating it was an “outrageous onslaught upon the feelings, the senses, the brains and the stomachs of an audience.”

The film was withdrawn for many years. An airing during the late night, What The Censor Saw season of films in the early days of Channel 4 generated new interest in the film and it was eventually given a DVD release in 2004.

The beautiful cinematography of Freaks and the intriguing travelling sideshow setting would go on to influence the videos for U2’s All I Want Is You and Radiohead’s Street Spirit, and in film, David Lynch’s Eraserhead and the Belgian sequence of The Elephant Man. Themes were revisited in the HBO drama Carnivale (2003).

Many of the actors in the film had until that point worked on real travelling fairs and sideshows and some had found their home both spiritually and physically on the boardwalks of Coney Island, Brooklyn. A bizarre movie culture has emerged over the last century of Coney Island movies that retains the freak show heritage of the location. In the majority of films that have been made or set there, there lies an undeniable sense of the characters being freaks, not necessarily in their physical forms, but social freaks or outcasts.

Evidence can be seen in older films like Morris Engels’ The Little Fugitive (1953), the tale of a Brooklyn toddler with a head full of cowboys and Indians, lost in the carnivals of Coney Island and meeting all manner of strange characters, and the lost soul in Coney theme continues in films such as Went to Coney Island on a Mission from God, Be Back by Lunch (1998) and Unknown White Male (2006).

Cult movies like The Warriors (1979), show Coney Island inhabitants unable to survive outside of the area, lost and afraid on the streets of Manhattan, whilst Darren Aronofsky’s epic Requiem for a Dream (2001) tells the tale of four very different societal freaks trapped in the desolate fantasy world of Coney Island.

Our fascination with freak show cinema is an ongoing concern and established actors such as Warwick Davies, Kenny Baker and Game of Thrones star Peter Dinklage are bringing representations into the light by opening up taboos and dealing with them in mainstream texts. Despite ongoing taunts, Dinklage’s portrayal of Tyrion Lannister places him as the hero of the series, noble, witty and ultimately sexy. His previous roles in Elf and Pixels have seen him exploiting his stature in the name of comedy, but somehow managing to remain dignified.

The fascination with the “freak show” culture has certainly not diminished in the age of political correctness, from Jackass’ Wee Man to the glut of BBC II! and Channel 4 reality shows, yet cinema appears to be taking a more sensitive approach. The moving performance by Adam Pearson as The Deformed Man in Jonathan Glazer’s Under the Skin (2013) is far removed from the characters in Tod Browning’s film.

Despite his facial deformities which are comparable to Joseph Merrick, he is not portrayed as a “freak“, but simply as a deformed character. His juxtaposition with the obvious beauty of Scarlett Johansson creates a Beauty and the Beast scenario, and his presence in the film certainly adds to the surreal nature of the piece, but it is a noble and respectful performance nontheless.

And so to Freak Orlando, a film that Ernest Mathijs in the BFI’s 100 Cult Films book, describes as “A sharp critique of consumer society in the shape of a homage to pop culture (or is it the other way round?)”. The narrative, although reportedly vague, centres on an Orlando figure played by Magdalena Montezuma and her band of deformed followers, a twisted nightmare version of Snow White.

A series of episodic adventures finds her obtaining a collection of identities before finally arriving at a festival of ugliness. Comparisons with John Waters’ equally freaky Pink Flamingoes scream out, but unlike that wonderful celebration of the repulsive that Waters continues to publicise to this day, Freak Orlando has been little seen at the request of director, Ottinger. The film was a box office flop on release and despite intermittent interest in Ottinger’s work from feminist circles; he has continued to keep the film under wraps. It still has no commercial DVD release.

Freak Orlando demands to be seen and has to be viewed in the context of an example of Arthouse European cinema from a distant era. The film is being shown as part of The Liverpool Biennial and will have just one screening at FACT on Oct 13. Tickets available at the box office.