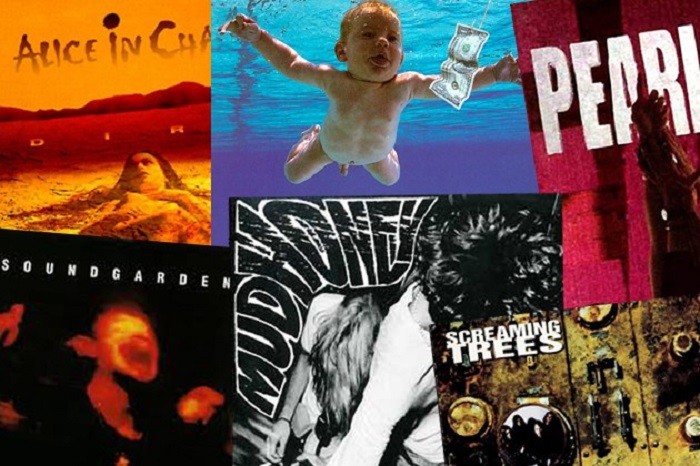 As we celebrate the 25th Anniversary of Nirvana’s classic Nevermind, Getintothis’ Banjo offers an alternative view on just how much Britain fell under Grunge’s spell.

A few weeks ago, we were told, was Grunge’s 25th Anniversary, with its defining statement, Nirvana’s Nevermind being released in 1991. Furthermore, we are also told that Grunge once ruled the world, sweeping all before it and ridding the world of Hair Metal. Now whilst this may all be perfectly true if you are an American, in Britain, Grunge as a movement did not really seem to quite take off.

Now before we go any further, I would like to state for the record that Nevermind is a stone cold classic and a wonderfully infectious album – we owe it a great deal. This article does not set out to take anything away from such a wonderful record. Nor, while we’re about it, are we trying to play down or deny that Grunge did indeed reach these shores and that there was a brief thrill seeing the likes of Tad and Mudhoney ply their trade in a small, grimey venue. What we are saying here is that the image of Grunge bestriding the world like a plaid-shirted colossus is essentially an American one and that. in Britain, we had other things on our mind. While we were quite happy to soak up Nevermind’s epochal sounds, the nation’s creative urges were employed elsewhere.

Add to this the fact that, as a genre, Grunge did not seem to last long and perhaps it is time to re-evaluate its world conquering status. It is fair to say that without Nevermind, Grunge would not exist and perhaps it is the album’s reputation that gets somehow transferred to the genre.

Having successfully negotiated the Grunge years, this writer can attest to the fact that lots of folk were inspired by Nirvana to pick up their guitars and to commit to making a similar noise. But, and this is the important part, none of them ever really became successful. It is difficult to pinpoint why, but there are some possible reasons.

Firstly, it is difficult to actually define what constitutes Grunge. It was easy to confuse with bad metal or a more basic rock music. God knows there were enough of these groups trying to jump on its coat tails and follow through the door Nirvana opened– step forward Stone Temple Pilots, Silverchair, et al.

And secondly, maybe Grunge it is part of an American lineage, flowing from American Hardcore and influenced by bands then unfashionable in Britain, such as Black Sabbath, and picking up punk over a decade after it exploded in the UK. Grunge was a very American stew, it may have been difficult for British bands to be part of it, particularly as they were removed from the scene by distance in those pre-Internet times.

Britain also seemed to be doing what it does best – creating new musical styles and textures. My Bloody Valentine’s Loveless, St Etienne’s Foxbase Alpha, Spiritualized’s Lazer Guided Melodies and Aphex Twin’s Selected Ambient Works were all released in Grunge’s peak years of 1991/92. All undoubtedly great records and markers of things to come.

Dance music was perhaps the UK’s main focus at the time, with Primal Scream’s Screamadelica and The Orb’s debut Adventures Beyond the Ultraworld finding their way into the world in the same year as Nevermind. By 1991, the Second Summer Of Love was four years in the past and Dance music had made it to the mainstream, with further success on the horizon. Electronic DJ Mixmaster Morris told of a poster that took pride of place in his music room, depicting a bonfire of guitars. Taken at a demonstration of disgust at Western Culture, the image had struck him as a prophesy for music – for a lot of people at the time guitars were over.

Trip Hop was another movement in ascendance, with Massive Attack’s debut Blue Lines being released in the same year as Nevermind. It is easy to say that Trip Hop as a genre also did not last long, but it’s main players have continued to forge successful and credible paths. Massive Attack, Unkle and Portishead still command large audiences and both have continued to make incredible records, while Goldfrapp, Coldcut and Tricky all went on to develop new sounds and careers. Surely more than we can say for Stone Temple Pilots or Screaming Trees.

Pop music had a very good time of it in Nevermind’s year, with Simply Red, Eurythmics, Tina Turner and Michael Jackson taking four of the top five best selling albums in the UK. The following year, when we could perhaps say Grunge’s influence should be making its mark, little had changed. Simply Red’s Stars taking the number one slot for the second year running, backed up by Lionel Richie, Cher and, again, Michael Jackson. Grunge may have been all over the music press, but it had little impact on the charts.

Perhaps it is easy to cast an eye over old movements and disprove it’s longevity or belittle its impact and there is no denying the Nevermind is a killer album. Personally, this writer finds Britain’s reaction to Grunge to be enormously gratifying; we are able to avoid slavishly following the pull of American culture, at least in terms of the music we produce, and respond with our own multi directional offerings. And long may it continue.