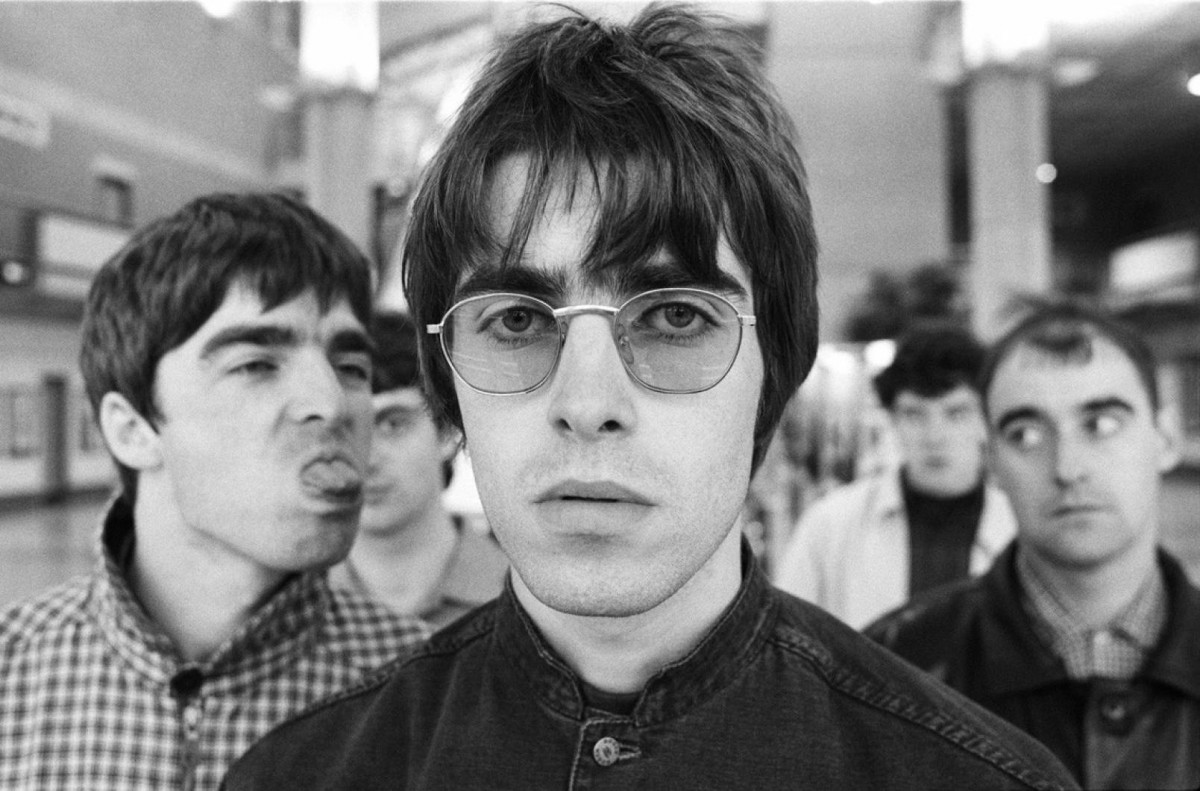 With tales of hammer blows, alarming bowl cuts and gigs of a generation, Getintothis’ Jamie Bowman enjoys the nostalgic wonder of Supersonic.

It’s the size of the thing that really hits you. As the helicopter swoops over a typically green, home-counties tablecloth of a landscape, thousands and thousands of people come into view stretching away from a huge stage for as far as the eye can see. As the camera turns back to capture the look on the faces of the band members of Oasis as they swoop into Knebworth their expressions say it all. Even Liam Gallagher is lost for words.

Thankfully Liam being silent is not a regular occurrence in Supersonic  – Mat Whitecross’ new documentary about the rise of Oasis – and it’s the younger Gallagher sibling whose malevolent presence and wickedly surreal sense of humour dominates this hugely entertaining history of a band who, for better or worse, defined a generation.

You suspect Gallagher senior was well aware that this would be the case such is the world weary air that surrounds Noel as he patiently describes each fight, break up or botched gig. But then Noel was always like this: at one point we hear from his mum Peggy who remembers an insular boy, alone in his room with a guitar and on constant  look out for his drunk and abusive father.

These early memories are a particular highlight of the film as we see numerous home videos and grainy family snaps  of the band in their pre-fame days. Noel sporting some alarming bowl cuts while roadieing for the Inspiral Carpets, Liam on stage in a school production and Bonehead with hair are just a few of the images to cherish while the singer’s story about being hit by a hammer will have you in stiches.

Read our memories of Oasis at Knebworth, Top of the Pops and the early years

And there’s the music. Bonehead’s wide eyed wonder that Noel has actually written Live Forever and it’s not in fact a cover is particularly endearing but then so is an early stripped back version of All Around The World which is far better than the bloated epic they eventually put out.  By the time we view footage of the famous gig in Glasgow where Alan McGee signed them, they seem almost the perfect package as Bring It On Down bludgeons its way from the screen and McGee is sold by the second song.

Like the band themselves, Supersonic is far from perfect. Where recent documentaries about Amy Winehouse and Kurt Cobain have been anchored by a central tragedy, this is a tale about euphoria, ambition and downright cheek and like the coked up mate at a party it can get tiring. When we do get to see the morning after the night before it’s often shrugged off in laddish terms – shamefully so when discussing the bullying of drummer Tony McCaroll or the nervous exhaustion of bassist Guigsy who remains an enigmatically silent presence throughout the film.

Neither brother wants to go too much into the sibling rivalry that defined the band and it’s left to others such as sound engineer Mark Coyle to illuminate what was happening to Noel when he disappears mid-tour and escapes to San Francisco. Some perspective too on what was going on around Oasis would have been good as well  – yes their rise was unprecedented but it happened in the context of a huge shift in the nation’s musical tastes and only the odd bit of archive footage hints at the Britpop phenomenon happening at the time.

By the film’s ecstatic ending though it’s almost impossible not to be swept up in the nostalgic wonder of it all. Liam remains a singular life force with a voice from the ages while Noel’s songs frequently sound incredible. Sometimes that’s enough but as Supersonic proves, Oasis were much, much more.