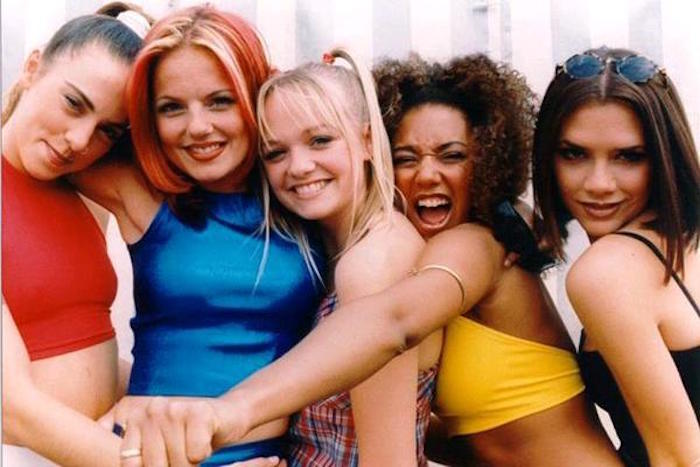 20 years on from their now icon debut record Spice, Getintothis’ Lorna Gray explores the messages behind the music of the Spice Girls.

The Spice Girls. Love them or hate them, it’s impossible to deny that you know all the lyrics to at least one of their songs – and why shouldn’t you? Since they’re the greatest selling girl band to ever exist. They’re one of the most well-marketed bands in history and became complete icons of the 90s. To this day, any piece of clothing branded with the union jack can be associated with the pop group – or the UK National Front, actually. Sporty, Scary, Baby, Posh and Ginger were names that became almost as legendary John, Paul, George and Ringo and the band succeeded in selling over 80 million records worldwide. That’s what I call Girl Power.

Not only did the girls smash records in terms of their success, but they also did pretty well in smashing the patriarchy with their empowering no-bullshit attitude – something pretty much non existent in the pop music industry of the 90s. Recently, a leaked video showed the feisty five calling out the “chauvinistic pig” for asking them to show more skin during a photoshoot in ‘97, which nobody can deny, is pretty progressive and admirable.

A band which was manufactured in order to compete with the success of boy bands, stuck their middle fingers up to their founders and told them where to go after the dictated creative control combined with the lack of a contract left them knowing they could do better. After taking it upon themselves to source a manager and a label, they ended up being signed to Virgin Records. A year later Spice was released, and went multi-platinum in 27 countries. Bad. Ass.

I’ll tell ya what I want, what I really really want – is to celebrate the Spice Girls the amount completely necessary on the 20th anniversary of their debut. This is my love letter to the five girls who gave me my sassy attitude and let me know I could strive for what I wanted and never be second best.

I was only three years old when Spice was released, but still, it says a lot about their popularity that I can remember the songs being played on the radio. The merchandise which littered the floors of my childhood bedroom that my sister and I constantly fought over is now stored safely in the attic as it’s too close to our hearts to throw out – also because it’ll probably worth a lot of money some day. Spice Girls were a big part of my growing up, and I’m positive the majority of my generation could say the same. Most didn’t take it to my level though, and get a “GRL PWR” tattoo on their leg after one too many gins. Everyone had a favourite (Baby was mine, but now I’m older I’m more of a Ginger fan – ironically the only one named after an actual spice), and every fan knew the words and the dance moves to their songs.

The first single off of Spice is arguably one of the most famous from the group. The intro of Mel B (Scary Spice)’s manic laughter sets the tone for the fantastically fun forty minutes that follows. Wannabe is more than a really really good pop song, its lyrics preach of females sticking together, girls choosing each other over male love interests and the importance of female friendships. It’s probably the most emblematic song of the band’s “Girl Power” mantra, and one of the most catchy of their tracks.

“If you wannabe my lover, you gotta get with my friends

If you wanna be my lover, you have got to give,

Taking is too easy, but that’s the way it is.

What do you think about that now you know how I feel,

Say you can handle my love are you for real,

I won’t be hasty, I’ll give you a try

If you really bug me then I’ll say goodbye. ”

You’re lying if you claim you didn’t sing that in your head, and God only knows what you were up to in the 90s if you can’t reel off the rap part word for word, off by heart. Wannabe is known to most of the English Speaking world and for a good reason. As if the song itself wasn’t fun enough, the video shows the girls gatecrashing a posh hotel and causing absolute mayhem, but having an incredible time in the process.

Be My Baby: the legacy of Ronnie Spector and the badass girls of the 60s

Say You’ll Be There is another hail to the importance of female friendships, and more specifically, the friendships between the group. Not as popular as the first track, but still an amazingly produced pop song, that even has a harmonica solo thrown in for good measure. The second number one from the album.

The feminist undertones of the record are displayed further with their ballad 2 Become 1. Undeniably about sex, but rather than an in-your-face and direct approach to the topic, a song that addresses the emotional side of the act. It refers to two people becoming one entity through the act of sex, cheesy – yes, but still quite interesting to have a song about sex that isn’t just about sex – which even in today’s charts, is something of a rarity. Not only that, but it even addresses the importance of contraception within the lyrics, “Be a little wiser baby, put it on, put it on”. How did we get from that to the likes of the gross skeeze Robin Thicke blatantly singing about tearing asses in two?! Last Time Lover also refers to sex, the funky bassline intro let’s you know what’s up within this song.

Another cheesy ballad comes in the form of Mama, lyrics that talk about issues surrounding mother-daughter relationships during adolescence. The acoustic song was the third from the Spice Girls to reach number 1 in the UK charts and shows the versatility of the group, they might not be the most incredible singers, but they can carry a decent harmony.

The Spice Girls once again stick their middle fingers up and show off their attitude with their fourth consecutive number one, Who Do You Think You Are. Taking inspiration from some of the people they had met within the music industry, the lyrics call out the bullshit behaviour of superstar and diva types, something that, as women, was a pretty ballsy – or I should probably rather say gutsy, since there are no balls here, besides the ones these five girls are busting with these lyrics. Possibly one of the most catchy Spice Girl songs out there, definitely an underrated track.

It’s just a fantastic, iconic and timeless album that can lift your mood and make you want to get up and dance. Musically it’s not particularly groundbreaking, it borrows characteristics from a number of genres such as R&B, funk, hip hop and soul – this creates a standard run of the mill albeit well produced pop sound. To me, and I’m sure many others like me, it’s more than that, though. It’s a message to my younger self that girls are just as powerful as boys.

Hell, if you needed any more evidence of that, the Spice Girls were manufactured as an attempt to compete with the boy band market, and surpassed all expectations, outselling the lot of them. It’s a message that females should empower, support and love each other, rather than compete and bitch about each other. It’s a reminder that you’ll only have one mum and you should cherish her. It’s positive and fun feminist propaganda, a polite reminder that girl power is real, and something not to be reckoned with. If I ever have children, I’ll be sure to introduce them to Gerri, Emma, Victoria, Mel B and Mel C.