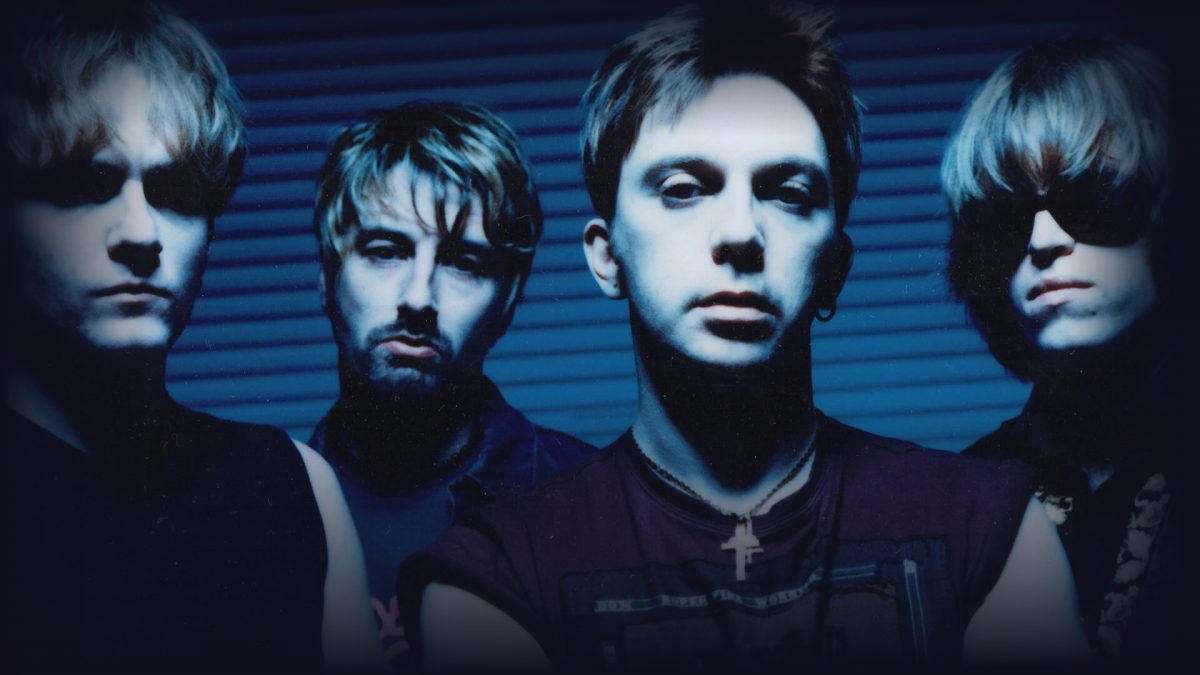 As a special Mansun convention celebrates 20 years since The Attack of the Green Lantern, Getintothis’ Del Pike revisits this often overlooked classic debut.

This month marks the 20th anniversary of one of the most important albums of the brit pop era and Liverpool is hosting a one day convention to mark the event.

Mansun’s Attack of the Grey Lantern was ignored cruelly as the country still revelled in the glories of Blur, Oasis, Radiohead and Pulp. If those bands were the school prefects and sports day heroes, Mansun were the slightly creepy kids, sat at the back of the class picking their noses and pulling the legs off spiders.

Maybe it was in their name, an amalgam of Charles and Marilyn Manson and Hanson, just a bit too similar, or in their uneasy attire, bare chests and dodgy moustaches on occasion. It can’t have been their music surely that kept them from enjoying those same accolades as their award-winning peers. Wide Open Space alone is a treasure of the era and is only one of many great tracks the band produced over their career.

Mansun’s apparent failure to ignite was the core key to their charm though. This was a cult band it was so so cool to hate, but secretly like. Singer Paul Draper is a Liverpool born and bred, but the band made a big deal from the fact that they came from the Chester area, almost inviting accusations of woolybackism.

Non-charting single, Take it easy chicken kicked off their career in 1995 followed by Skin up Pin up / Flourella, barely cracking the chart at 91. But it was their run of numbered EPs that segued with some sophistication into the world of the Grey Lantern that showed Mansun’s unique approach. Here was a collection of tightly produced little artefacts, packed with undeniably strong material. The EPs continued throughout their career and never skimped on quality non lead tracks.

Where Pulp had an interest in borderline acceptable sleaze, Mansun crept over the line and the material produced in the Grey Lantern era is much kinkier, and delivered in an almost Carry on Vicar fashion.

EP One’s Egg Shaped Fred is Happy Mondays doing I Am the Walrus with its surreal stream of consciousness –  “kin of a nosebreak, Fatima toothpaste, Penelope Cheapskate, Claudia Farmgate”, it was never going to be an easy ride. A re-released Take it Easy Chicken fared better as the lead track on EP Two peaking at number 32 and from then on it was a run of water-tight tracks taken from their debut album, released on Feb 17, 1997.

The album itself, gaudily wrapped in gothy purple roses is as enigmatic today as it was then. It’s easy to say it doesn’t make sense, but in fairness, it comes across as a purposefully non-penetrable labyrinth. In an interview with Select Magazine that year, Draper tried to explain that he was The Grey Lantern, a moralistic super hero who has descended upon an English Village to save the souls of the decidedly un-moralistic villagers. Preaching to the perverted. Different characters materialise throughout the album, Dark Mavis, Egg Shaped Fred, Albert Taxloss and Chad. The concept weaves in and out but can never be considered consistent.

If pushed to compare it to another album, Genesis’ Nursery Cryme (1971) would be a valid contender with the murderous Harold the Barrel, the creepy Harlequin, The Giant Hogweed and the little girl on the cover who plays croquet with severed infant heads from The Musical Box. Mansun’s follow up album, the epic Six, is unashamedly Genesis-like in its scope. Comparisons to The Kinks are the Village Green Preservation Society (1968) are also inevitable, if only for the resolute English-ness.

It may have been the spirit of prog rock that turned the music press against Mansun at this early stage, 1998’s Negative single had the honour of a two-word review in North Wales Rock Review; “Shit Sandwich” they cried. This was a band who were severely up against it.

The album opener The Chad who loved me is as Bond-like as its title suggests, namechecking guitarist Dominic Chad and borrowing heavily from John Barry and Nancy Sinatra’s You Only Live Twice theme.

The sour lyrical tone kicks off on track one with Draper’s chorus of “You can’t deny that your shit just tastes as sweet as mine”. Not an obvious contender for the Radio One playlist then.

Mansun’s Only Love Song hardly lives up to its title as The Grey Lantern meets the seductive Mavis (hiding in the vestry and looking sexy through her dress), but it is irresistible as tunes go and is one of many album highpoints. Similarly Taxloss is as catchy as hell and works around a repetitive motif not dissimilar to Tomorrow Never Knows or How Soon is Now? The chorus, with its “Taxloss Lover from Liverpool” lyric plays around with Little Jimmy Osmond’s Long Haired Lover from Liverpool, but is epic in comparison. The video for Taxloss showed a prank at Liverpool Street Station where money is ceremoniously scattered across the morning commuters, almost imitating the climax of the Ringo Starr / Peter Sellers comedy, The Magic Christian. The Liverpool references run wild as do the commuters.

The almost throwaway You, Who do you hate? Offers a chance to hear the more melodic qualities of Paul Draper’s vocals and redeems itself in heartfelt bursts of “I want to be you!”

Wide Open Space is the track that Mansun will always be remembered for, radio friendly and absolutely gripping in its eerie production, echoing to reflect the title gambit. It’s a song for everyone. It’s as worthy a signature tune as anyone could wish for, but there’s still half an album to go and its filler free.

Relive the Britpop era with this Pulp retrospective

Stripper Vicar takes The Smiths’ Vicar in a Tutu into darker waters. The Lantern is worried about the dodgy Mavis so goes to see the vicar, only to discover that he is a stripper. He fears if he “dobs him in” the villagers will call him a “Plastic Scouser.” There are more Shaun Ryder convoluted rhymings and it becomes even more difficult when revisiting this album to understand the negativity surrounding it. Top tunes all.

The fleeting Disgusting plays it low and sounds uncannily, between chorus’s like contemporaries, Gomez. It’s the Lantern again, sharing his disgust with the parish. Despite its lack of dynamism, it’s a perfect and worthy bridge to the other great single on the album, She Makes My Nose Bleed. It’s a sharp tune with potentially misogynistic lyrics “Slapping her around and making her bleed” is perhaps not the best way to treat a girl who makes the singer bleed, sneeze, cry and sigh.

The album closes on a sinister trio of tracks that tie up the vague story, Naked Twister sounds more like a love song than Mansun’s only Love Song and early single Egg Shaped Fred re-appears in some context this time, helping The Lantern to reveal who the Stripper Vicar really is. Final track Dark Mavis tells all, it was Mavis all along. This may just be the best track on the album, saved until last. There are some great lines too, not least in the bizarre chorus; “In the path of righteous men / There is rubble where I stand / I’ll be the one / You can kiss his vase until the end of the month.”

The haunting “Na na na na na…” refrain leads you back to the start of the album with a Chad who Loved Me reprise. The album has one of those hidden tracks about ten minutes after the album that you don’t get in the age of digital downloads, remember how they used to make you shit yourself when you forgot the CD player was still on? It’s a clever little track too (An Open Letter to the Lyrical Trainspotter) that archly tells us how the lyrics are gobbledegook and are not meant to mean that much.

The album made it to the number one spot and hung around for 19 weeks, belying criticism and a three-disc special edition in 2010 didn’t fare too badly either.

Mansun’s career continued down a curious path with their luscious 1998 album Six delving even deeper into the realms of the concept album with guest vocals from Tom Baker and references to AA Milne. The big surprise came with 2000’s Little Kix, an album that sounded like it was made for the radio. Completely concept free despite Genesis’ Hugh Padgham at the desk. It spawned I Can Only Disappoint U, peaking at number 8 in the singles chart and showing massive commercial potential by synching all over contemporary TV trailers and sports coverage.

An unfinished album, Kleptomania, which stood up well in fairness was released as part of a three-disc retrospective in 2004. The album was originally going to be self-titled, but an agreement between Draper and EMI based on a mass petition to release the tracks led to this worthy addition to the canon. The rest of the package was made up of B sides, rarities and outtakes and material with Howard Devoto. This cry for release shows the cult following that Mansun had amassed over their tenure, and it can’t all have been from freaks and geeks.

Paul Draper is currently enjoying a comeback as a solo artist. His 2016 comeback single, Feeling my Heart Run Slow, sounds decidedly like Little Kix era Mansun, which is no bad thing. He is also partly responsible for the success of The Anchoress as co-producer of the project fronted by vocalist Catherine AD.

Mansun fans can celebrate the anniversary of this unique album at the Mansun Convention being held at Liverpool’s not so wide open space, the intimate Parr Street – Studio 2 on Saturday Feb 18. The event will include panels, hosted by Membranes frontman and GIT Award judge John Robb, an appearance from Mansun tribute band Taxloss Lovers, along with other live acts, auctions and a specially created Mansun museum. Tickets are £20 from the venue.