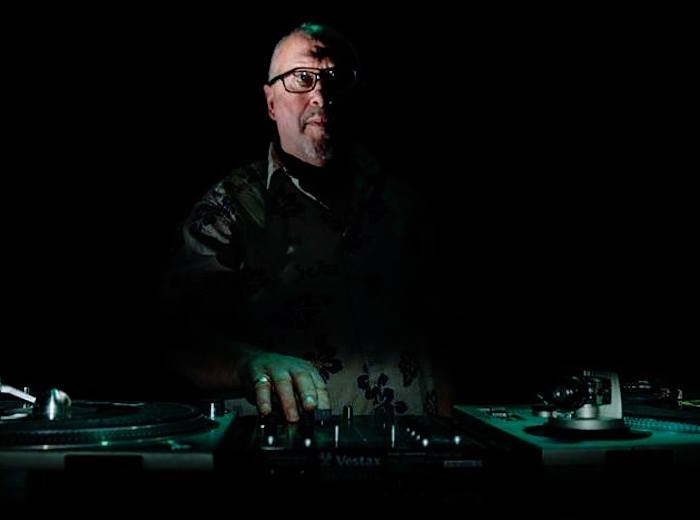 As John Manship prepares to DJ at Liverpool’s Tuff Love Soul Club, Getintothis’ Liam Flanders gets the chance to speak to him about all things vinyl.

Way back before FLAC, there was vinyl. The ‘Class-A’ of collectibles.

In years to come, we’ll sit in our hover-chairs lamenting to holograms of our great grand-children (through some form of Black Mirror-esque augmented-virtual-reality, Skype conference-call) about an ancient plastic disc based medium that was once ‘the holy grail of audible media’ but proved far too bulky and impractical to survive the ever digitized lives we have been hurtling towards for almost a century.

Or did it? According to popular sources, vinyl died in the 90s, cut down in the night by a digital plastic disc-shaped ninja with the ability to skip tracks automatically without having to lift a cumbersome needle, the Compact Disc. There were previous challenges from the quite mesmerizing magic of the Cassette Tape, a medium which could fit in your pocket and somehow could be erased and recorded-over, heralding the dawn of modern music piracy. Then there was the mini-disc, lauded as the format that could do it all and we all know how that ended.

Last year, as if by a miracle, like a black frisbee-shaped prophet, the previously pronounced dead format of vinyl was resurrected and ironically, on the back of several deaths of multi-platinum selling recording artists. These deaths no doubt spurred listeners to purchase the music of their fallen heroes, however why not just get a handy cloud-based file system that syncs to your toothbrush? Maybe there is more to vinyl than meets the eye.

Meanwhile, at 6AM outside a house in ‘Nowhere’ Michigan or ‘Someotherplace’ Tennessee, a Japanese ‘digger’ with a miner’s lamp fixed to his head is eagerly waiting for a garage sale to start, hoping to be the early bird that catches the worm. Except it isn’t worms he’s after, it’s ‘earworms’ in the form of vinyl records.

Not into vinyl? Read our ode to the Compact Disc

Dusty gremlins hunch over it in record stores, which smell like your great-aunt’s house in the farthest-flung of places the world over, and for sixty years, every Friday, Saturday and Sunday around the UK, in labour-clubs, pubs and anywhere that’ll house them, good-honest folk flick intently through piles of the stuff.

Vinyl. Underground music scenes everywhere have coveted vinyl since day-one and continue to. None more so than the original dance music scene, Northern Soul. The scene, not the music, was born on these very shores and is something which spawned hordes of clubbers, ravers and several other dance music movements such as disco, boogie, house and techno. The influence it had on our propensity to gather together, dance, love and chase oblivion is still being felt today.

For some 60 years, vinyl has been the lifeblood of the Northern Soul scene – obviously the pragmatic reason being the records played were recorded on vinyl at the time they were made – however, given we can now digitally rip vinyl at excellent quality, it doesn’t explain why vinyl continues to remain strong and, in many cases rules, underground music.

It’s not just dance music that keeps vinyl close to its heart. In the Latino communities of California and in particular Los Angeles, the Chicano soul sound has enjoyed equal longevity to Northern Soul and a similar reliance on the collectability of vinyl. The Chicano or ‘Low-Rider’ sound is the polar opposite to Northern Soul – Sweet ballads peppered with crunching drums and interesting arrangements – Mid-tempo ‘steppers’ that require you to actively search for the groove that is buried in the depths of the track – deep heartfelt lyrics, often romantic, sometimes painful in content but always one thing… addictive.

Like branches from a great tree, movements like reggae, disco, boogie, hip-hop, house and techno are still fuelled to this day by vinyl. eBay is absolutely full of the stuff for sale and websites like Discogs have consolidated vinyl’s position and bolstered its accessibility.

The world is a much smaller place now and it’s much easier to seek out what you want, however each genre of collectable vinyl is a bottomless pit of music once entered, becomes an inescapable journey into the unknown.

One man, who has lived the soul music journey from day dot, and earned his cult-status as a consummate collector, DJ, dealer and author is John Manship. Now in it’s 7th edition, weighing in at a gargantuan 3.8kg – Manship’s Collectors Guide is a comprehensive pricing guide containing information on thousands of titles.

Gathered and continually updated by Manship and his team over the course of 16 years. The amazing thing is, despite the size of this publication, there are still countless records yet to be discovered, never before released acetates and tapes longing to see the light of day and let’s not forget the never-ending potential of tracks hiding in the deepest darkest recesses of LPs. We thought it best to ask the man, John Manship, himself a few questions about this vinyl business.

Getintothis: How was it being a collector before the days of the internet and what has changed since?

John Manship: I’ve always enjoyed digging and being a ‘vinyl-junkie’. I just love looking through piles of vinyl and not much has ever changed for me. Obviously sites like eBay have changed things for the masses. I don’t really do eBay, due to a few disappointments in the early days. Plus eBay doesn’t give you the same sensation of dirt under your fingernails and dust-up your nose. You can’t get that experience on eBay.

I still now get a real kick out of the smell and the feel and the thrill of looking through piles of vinyl. My biggest love was and is digging in America. I remember the early days when we’d go into a place and see four million records in one place and the smell of it was a rush, there’s no other way to describe it. There were a few guys in the 70s known to have a million plus records, that wasn’t uncommon.

Getintothis: People talk of the bottomless-pit of soul music vinyl. How bottomless do you think it is, do you think the whole map will ever be revealed?

JM: Every day I find a soul record that I didn’t know. There’s always people sending me records in the mail. My day looks pretty much like this, I start work at 7AM and work straight through to 7PM, all the while listening to records, cataloguing them and listing them on our site.

There are so many gems lurking on the B-Side of records. things that you would never expect to be there and it comes back to being a vinyl-junkie and exploring your records, knowing your records and you do become addicted to discovering new stuff. But collecting records is a multi-faceted joy, you get the beauty of the physical appearance and the art-work and you get the sound. Record collecting is on a totally different plateaux to any other collecting I think.

Getintothis: What inspired you to collate your findings as a book?

JM: Other people were going to do it and the knock-on effects it has had has made it all worthwhile. People trust me to value their collections but also I get records sent to me all the while. To be an authority on anything, you’ve got to be honest, you’ve got to be forthright and you’ve got to be prepared to make errors. It’s impossible not to make errors, I make errors on a regular basis and I’m not supposed to but that’s the beauty of collecting vinyl, you’re forever learning.

I didn’t do well at school it just didn’t engage me but I’ve done alright since I’ve been studying vinyl. You can get really into things like studying the amount of turns on the records. That’s often the problem with bootlegs, they’re never cut at the same width of have the same turn-off. You can always replicate the matrix number and the art-work, they’ll never look identical but you can replicate them but it’s very difficult to replicate the number of turns. We even test recording volumes regularly as an indicator of counterfeit vinyl. 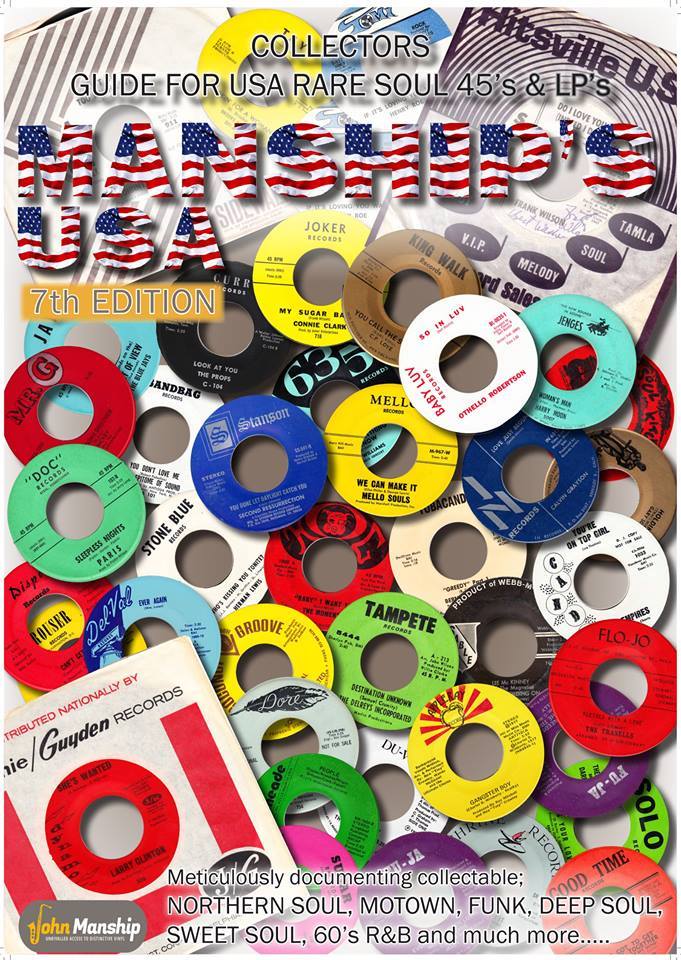 Getintothis: How do you go about gathering the information you require to produce Manship’s Collectors Guide?

JM: Honestly, just by sitting there and playing record after record. Every bit, every letter of information that goes on the blurb about a record I input personally off the back of the research I do. I have become better at it as the years have gone by as the breadth of my knowledge has developed. We’ve kept every write up that we’ve ever done for records featured on our auction site.

That could be another book in itself! The sheer amount of memorabilia and artwork we have too is encyclopaedic in itself – One example of this and you can probably Google it but the men’s magazine Esquire had their own record label and the album covers are amazing, the artwork is out of this world.

Getintothis: Given that you’re DJ’ing in Liverpool at Tuff Love Soul Club for the first time on February 18, what are ten of your favourite records?