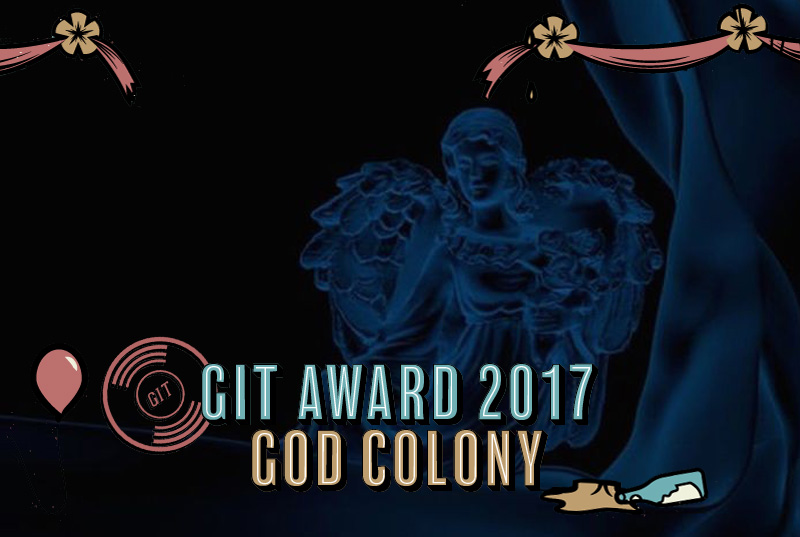 Enigmatic electronic producers God Colony champion the virtues of collaboration, Getintothis’ Paul Higham uncovers why the duo are real stars in the making.

If the GIT Award were to be awarded to the most enigmatic outfit amid the boundary-challenging eclectisim that makes up the list of nominees then the smart money would be on God Colony.

Indeed the duo seem intent on obfuscation from the outset eager, it seems, to preserve the sense of mystery that shrouds them. “We make love songs” they joke when asked to describe themselves.

That said, they do display a more serious side, their love of music shining through their words, unable to similarly disguise their clear musical obsession. “We’ve been obsessed with music since we were kids, we’ve known each other since we were teenagers and we do God Colony in James’ studio in East London“.

For a duo that has risen to a degree of niche prominence, very little is known about them beyond their music which continues to be drip fed via Soundcloud releases. For although Tom Gorton and James Rand cut their teeth in Liverpool, they relocated to London perhaps to take advantage of the sense of obscurity as much as the opportunity offered by the bright lights of the city.

The music they create barely reflects the bright lights, focusing instead on its suffocating underbelly. It is fraught and anxious while their beats are often razor sharp, cutting to the core. Yet while London plays an inevitable role in the duo’s story, it is clear that Liverpool has not been forgotten. “It’s inevitable the stories we tell sonically are partly about Liverpool. It’s where we met, it’s our home and it’s where we found music.

“None of the rappers we work with know anything about Liverpool but the rough, industrial and (hopefully) beautiful blank pages that we make are the foundation for them to say what they need to The sounds we use and love, the atmosphere we create, is definitely influenced by our time raving together in Liverpool – seeing Marcel Dettman in the Old Tobacco Mill, or Villalobos in The Masque.

“We aren’t really banging that stuff out as much anymore but the whole journey of raving is one we started in Liverpool, the idea of club music is one we became connected to there.”

That so, was there an element of surprise upon learning of their GIT Award nomination, “Yeah I guess so – we don’t really get the chance to come back up to Liverpool and we feel a bit disconnected from what’s happening there.

“It’s nice that people are into it, but I don’t think we’ve been in any Liverpool music mags or anything. Do people even know who we are?”

While the output of God Colony has been well championed in these pages we hope that the GIT Award provides an opportunity to introduce the duo to a much merited wider audience. Indeed the recent signs are promising latest single Fights, another collaborative project with Flohio was recently named as record of the week by Radio 1, deservedly opening the door to new audiences.

Fights by @god_colony is my tune of the week on @BBCR1 👏

From first listen it is easy to see why Fights could just be the record that proves the tipping point for God Colony. It hits hard, with a sense of hard-edged shape-shifting abrasion that nonetheless disguises an inner sense of fragility and vulnerability.

In many respects the best thing about God Colony‘s collaborative work is that it doesn’t sound like it. Too often collaborative works are disjointed and struggle to come together as a unified whole, yet Fights is an entirely cohesive whole, the music providing a perfect platform to a virtuosic performance by Flohio, a near state-of-the-nation barrage of verbal erudition that reveals both sides of the same coin.

The outward veneer of confidence and bravado masking the wider challenges imposed on the young, particularly from black and minority ethnic backgrounds, by an unflinching society is stark. The music captures this duality with an adroit deftness capturing both the edgy tensions and oppressive atmospheres as well as the life-in-the-moment euphoria and the sense of succeeding against a society ever-eager to stifle the ambitions of its young and excluded.

For God Colony, like much of the best collaborations, it all started by chance. Theirs is a story forged over friendship and cooperation than anything meticulously planned. As Tom is keen to emphasise, “we were just playing around with demos really in various studios that James was using, nothing serious. In a way it’s still nothing serious.

“We formed God Colony because we’re friends and we’ve spent all the time that we’ve known each other with music as the central thing that bonds us. I used to go and hang out with James whenever he DJ’d in Liverpool and annoy him to put records on. He was usually into it so it worked out.”

And how it has proved. From their debut release right through to Fights it is apparent that the duo have remained intent on forging their own identity. They have largely shunned convention and standing outside of scenes. This is exemplified by their move to London. Brave and ambitious, it seems a deliberate ploy. It could have been so easy to remain in Liverpool’s goldfish bowl lapping up the inevitable and often uncritical adulation that comes with it.

“We want to write pop songs, love songs, and fuck them up so that it’s distorted and twisted.

“It’s fun to me that all our songs get played a lot on huge radio stations but people don’t really write about us that much online. We’re in this weird space and people aren’t quite sure about what it is. Oh and your original question, we want to convey the aggression of heartbreak and produce for Frank Ocean.”

The reference to Frank Ocean is possibly tongue in cheek yet speaks volumes about their aspirations and their confidence. And don’t be fooled this isn’t some misplaced braggadocio. There is real sense that the band could achieve their ambitions, a growing sense that whatever they want to do is within their grasp.

Indeed it is their sympathetic collaborations that have characterised their work to date, the quality of which and the duo’s dextrous understanding of the human condition and their ability to capture the frustrations of life through a fusion of disparate electronica suggests that one day linking up with an artist of the renown of Frank Ocean may be a realistic prospect rather than an expression of slightly tongue-in-cheek ambition.

Yet one couldn’t accuse God Colony of playing the game to get where they want to be. While there is a welcome naivety to their approach, it is coupled by the inevitable conclusion that whatever success they achieve is dependent solely on the merits of the music they produce. This most clearly isn’t a brand, there is no multi-million marketing team providing its backing and charting the direction.

Indeed when we asked for an interesting fact on the group that we wouldn’t be able to find online they were quite upfront about their lack of online presence. “There’s nothing online about us, this is the first interview. All the interesting facts are in here, or they should be at least.”

Their work with Stash Marina showcases another side to their game, one that reveals more of the sense of heartbreak that the band speak of. On Desperate for example their is a sense of restraint in their music a sympathetic understanding of the subject matter that somehow lends it both a poignancy as well as a fuck you sense of defiance.

It is complementary without overshadowing the astonishing work of Stash Marina, offering a sympathetic contrast to to the music they produce with Flohio. The contrasts between Turn My G Down, with Stash Marina, and SE16, with Flohio, could barely be more pronounced. The latter possesses an unbridled aggression while Turn My G Down is more reflective and world-weary.

What acts as a unifier is that in each it seems less about God Colony and more about the vocal prowess of their collaborative colleagues with the music providing a platform for the vocalist to shine. The music never overpowers, never screams look at me and succeeds in the context of the wider whole.

Yet if you were to strip away the vocals and analyse the music alone you would be forgiven for being astonished at the powerful emotions they convey and their deep understanding of the profound.

This is the crossroads that the duo are at. Whether the willingness and desire to work with others and the subsequent remoulding of their own sound will act as a hindrance to forging their own identity in the wider consciousness, we can but speculate.

Yet the impression that the duo convey is one of not caring too much about themselves as much as the music they are able to create and the collaborative processes that provide the freedom to remain creative. The music that currently spins on regular rotation on the hi-fi at God Colony HQ, “Alice Coltrane, Sampha, Bala Club, Saba, Kendrick, Migos for a bit, Missy Elliott, Nguzunguzu” speaks volumes for the eclecticism at the heart of God Colony that has helped infuse its ideas.

It is the lack of a singular identity and the absence of easy and safe descriptors for the music that reveals God Colony as a uniquely compelling force. It may restrict their wider reach in the long term as they remain in the background allowing the MCs they work with to shine, but it makes them exciting. It makes every new release so eagerly anticipated and there are few artists around you could say that about.

When discussing what the future holds for the pair, it seems continuing to work with others remains a high priority, “two more videos with NTS are coming out and then probably an album/producing other people’s work. Some of that coming out really soon, so the year ahead looks pretty good. More club shows too.”

With this in mid we were naturally keen to understand more about how such collaborative projects come together, “we started working with Stash Marina and Flohio through friends – someone who runs a London club night we go to (RIP Tropical Waste) showed us a YouTube of Stash and we got in touch.We’ve never met her, but we have this beautiful friendship talking about lyrics and mood and emotions. I hope we link up in real life one day.

“Flo we met through someone who James was mixing a record for. it’s been amazing working with her and becoming so tight. She’s special – so is everyone we work with.

“We’re lucky to be able to spend time with these people and make this stuff, we know that.

“The challenges are mainly making sure that you agree creatively without compromising to make something average – often we don’t agree and it’s about fighting corners to ensure that we get the best result.

“Generally though we have real trust with our collaborators so the process is seamless. Time is a challenge. Fuck time.”

It is also apparent that the duo don’t take themselves too seriously and remain keen it seems to retain that sense of enigmatic mystery. As a parting shot they reveal the biggest influence on their music thus far is “Missy Elliott and sunrise, the concept“. Make of that what you will.

But also make sure you take time out to listen to God Colony and their astonishing music created as a platform for others to shine. For two humble Liverpudlian lads keen to fade into the background and showcase their collaborators’ talents, now could be their moment to truly shine.