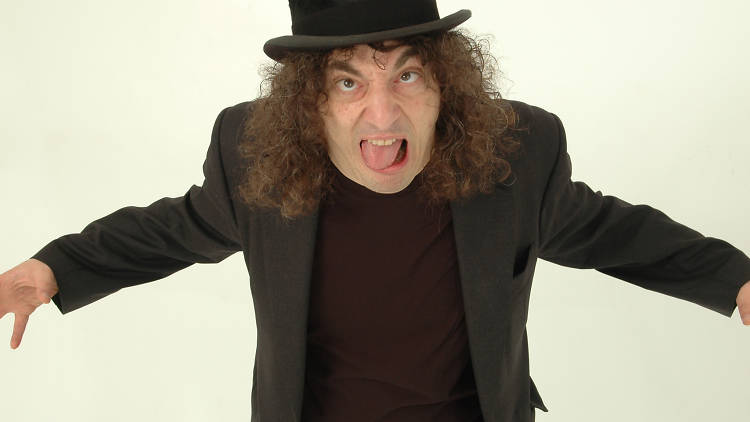 Jerry Sadowitz is never an easy ride with his uber-offensive mix of comedy and magic, as Getintothis’ Del Pike discovered to his shock-horror!

To experience a Jerry Sadowitz gig is not unlike sitting in the corner of a bar, listening to the most vulgar bigot in town, spouting his vile views to a gang of like-minded listeners, who laugh along to every line.

The difference here is we have paid for the pleasure and we encourage the diatribe by laughing loud and clapping hard. The other difference is that Sadowitz doesn’t believe the bile he is spouting, it’s an act (we hope). He’s clearly an intelligent man and a very talented magician, who tonight introduces himself as a Frankie Boyle tribute act.

Like Boyle, Sadowitz takes the stance of a fictional dogmatist, throwing scraps into the audience to see if we gobble them up or not. When he comments on the current wave of terrorism, Grenfell Tower and Madeliene McCann, it’s difficult to see the funny side, and yet a room full of decent people laugh. A few gasp, or simply remain silent.

We’ve been here before. When Chris Morris shocked us with the Paedogeddon Brass Eye Special back in 2001, the tabloids unleashed a campaign against Channel 4, the like of which had never been seen before. What they had missed, or chose to ignore was that the object of Morris’s ridicule was not paedophilia, but the tabloid’s themselves, and their salacious coverage of the issue. Back in the real world, placing topless page three teenagers next to stories of child abuse witch hunts was the most horrible juxtaposition of all. Morris got it right.

Similarly, as an observational comedian, a job that involves taking the role of a professional liar, Sadowitz creates his persona as a character, driven by the ideology of The Daily Mail and the Far-Right parties. He challenges the audience with his obscene treatment of taboo news stories by being (acting) racist, sexist and homophobic, in the hope that they see through his veil of deception and trigger the chuckle muscles, highlighting hypocrisy with every breath.

Sadowitz starts by paying tribute to the recently departed Bruce Forsyth, with heartfelt comments regarding his all-round talent, before noting that the only thing the press and TV tributes failed to note was that “he was a c**t”. Shocking? Believe me this is tame. Sadowitz tells us right there, “It’s going to get worse”.

The Brucie banter seamlessly slides into a tirade about “c**ts” in general, and then homes in on “Young c**ts!”. As the C word gradually becomes less and less shocking by his perpetual drip-feeding of it, we find out that their annoying tendency towards the left is what made him vote Brexit. Or did he?

Each victim of Sadowitz’s act naturally flows into the other and before long we realise that nothing is sacred. Paedophilia and rape gags pepper the whole show and he’s not afraid to take on accents when ridiculing Muslims. The thin line between Sadowitz and Manning does become the elephant in the room, and in a Last House on the Left style, we keep telling ourselves “it’s only an act, it’s only an act”.

He knows how to press scouse buttons too, risking all in the name of Ken Dodd, Madeleine McCann and Jeremy Corbin attacks, tapping into what we hold dear. It’s a relief that he doesn’t mention Hillsborough, not in this city. When he jokes about Grenfell Tower, he alludes to the fact that London audiences wouldn’t get it, I wonder if he adjusts his offence gauge from city to city. Do the Grenfell Tower gags run so freely south of the Watford Gap? There are such moments when the audience reaction suggests that he has gone too far, but how far can too far go?

The levels of offence vary. An attack on Stewart Lee as a comedian who he claims, simply finds a joke and repeats it for comic effect may offend Lee’s fans, but then applying the same insult to the ailing Billy Connolly takes bad taste to a new level, particularly as he is possibly one of this shouty Scottish comic’s greatest influences.

Referring to the new female Doctor Who as Doctor Whore is offensive but a necrophilia joke about a recently deceased female celebrity with a Jimmy Saville sub-gag thrown in takes acceptability to a whole new level.

The magic, which is brilliant by the way, should provide respite from the hard-core mockery but who am I kidding? A disappearing card trick leads to a McCann joke and another card trick leads to another in a long line of Saville jokes, and we’re back in the room. Hands up, who came for the magic anyway?

Donald Trump is congratulated on his treatment of Kim Jong Un’s current terror campaign, and Sadowitz’s only complaint is that he was too light on him by referring to him as just “Rocket Man“. What he should have called him is probably best left to your imagination but did include the words “yellow” and unsurprisingly, “C**t“.

This type of gag leads to perhaps the more worrying element tonight, in than Sadowitz’z shtick appeals to certain crowd members, cheering along with the pseudo racist gags and pro-Brexit / Trump material, clearly not buying the irony, but possibly buying The S*n.

When those moments feel like Saturday night in Bernard Manning’s Embassy Club, you do briefly question the safety of Sadowitz’s act a little. It’s like the neo-nazis who used to turn up for a fight at a Joy Division gig. Sorry guys, you’ve missed the point.

Sadowitz grabs his bag of tricks and returns to the dressing room and we can only hope he returns to the state of a normal sane, non-Brexit voting individual. It is only an act, and it does feel uncomfortable to laugh at about 90% of the subject matter aired tonight, but Sadowitz raises some issues about British attitudes and tabloid ideologies that sorely need addressing. We are laughing because some “Young C**ts” do actually believe this shit. It’s an unorthodox but effective way of tackling those ideals and it was an awkward experience at times, but we came, we laughed and we thought… a lot. I’m still thinking now.