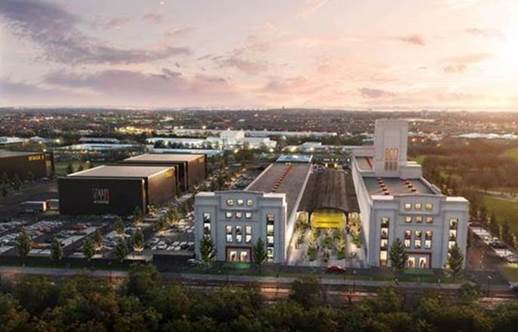 With the city’s bustling film industry set to scoop a major coup, Getintothis’ Roy Faceplant looks at the bigger picture.

Liverpool will be welcoming the stars of the bug screen soon, as one of the country’s leading film and TV studios announces plans to open a major complex in the city.

Twickenham Studios will aim to transform the site of the grand former Littlewoods headquarters into the biggest film studio outside of London. The studio is steeped in Hollywood folklore, with the likes of American Werewolf in London, Blade Runner and Ghandi as just a handful of titles they have been worked involves with.

The studio also shares links to its new Liverpool home, with several of The Beatles‘ films being shot, mixed and mastered there.

With the city recently being shortlisted as one of the contenders to be the new home of Channel 4, the news of the development of the former Littlewoods building is sure to be a boost to Liverpool’s chances.

Tim Heatley, co-founder of the building’s developers Capital & Centric, said “Twickenham Studios couldn’t be a better fit. They’ll bring a century’s worth of film-making heritage and help to write a new chapter for the creative industries in and around Liverpool.”

Watching films on the big screen – a dying pastime?

Having laid empty since 2003, the building is seen as being the ideal setting for the development with Twickenham Studios Chief Operating Officer Ms Maria Walker saying it was ‘a good fit’ for major US films. ‘It actually looks like a Hollywood Studio, it has the right vibe,’

With the likes of Tom Hardy, Danny Boyle and Samuel Jackson all working in the city over recent weeks, who are we to argue.