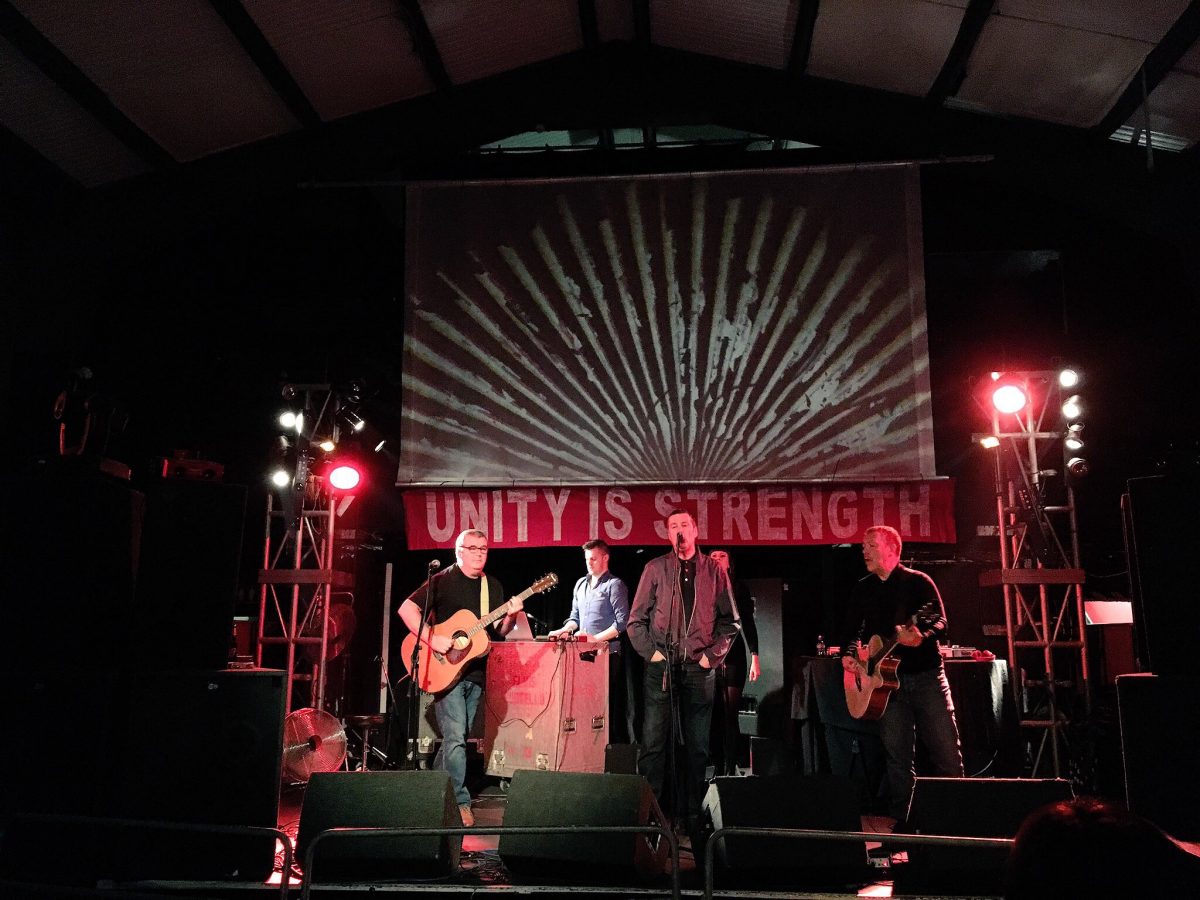 The Farm at Liverpool Left

A night where musicians combined for pride in politics, Getintothis’ Lewis Ridley enjoyed one of the stand out nights of the year.

To coincide with Labour Party Conference at Liverpool’s Exhibition Centre last month, an event was put together by local councilors in the Merseyside area as a celebration of solidarity through politics, music and sport.

A collaboration of musicians, artists, actors and writers with politicians from the local area created Liverpool Left. Over three days, delegates and members of the public alike came down to District to enjoy dramatised performances and DJ sets on Sunday, September 23 with the two days following it terrific nights of live music.

On Monday, Jamie Webster, made famous by A BOSS Night which shares the same venue, was joined by Mel Bowen and The Original Series and Billy Cox, but it was the final night which really left a mark. The football connection remained throughout, as the joint Liverpool FC and Everton FC banner for the charity Fans Supporting Foodbanks was aloft outside District, and leaflets urging to support grassroots football nationally.

Ian Prowse kicked off the music for the evening, a set including his famous Does This Train Stop on Merseyside began a night of music which was enjoyed by filtering supporters of the next UK government.

By the time The Farm arrived, the room was packed, and as District rang out in chorus of All Together Now, there was a sense of unity alluded to by the banner behind, reading: Unity Is Strength.

That was pretty special. 🌹 @LiverpoolLeft sings All Together Now with The Farm at @DistrictLpool.

A show of solidarity with @jeremycorbyn. #Lab18 pic.twitter.com/SPeiLdoyMe

At numerous points, Peter Hooton took time to thank fellow organisers of the event, which included Ian Byrne, The Farm‘s manager Peasy and Sarah Henney as well as local MP for Walton Dan Carden. It was Carden who was given the chance to introduce the next act, after a rousing speech during which he too thanked the efforts of the local people.

It was Cast‘s John Power who was to close Liverpool Left, Walkaway, Fine Time, and Alright all featured in a set, but the standout moment was a stirring and heartfelt speech which Power ended with: “If helping the most vulnerable in our society is radical, then I’m a fucking radicalist.”

Its no surprise this writer happened to mention this event when discussing the relationship between the three cultural pillars in a recent Deep Cuts column. It was a special night, with very few events capturing the same element of togetherness, hope, and pride.

There is hope too that the event will be regularly, perhaps monthly, if the support it there. It certainly was this night.