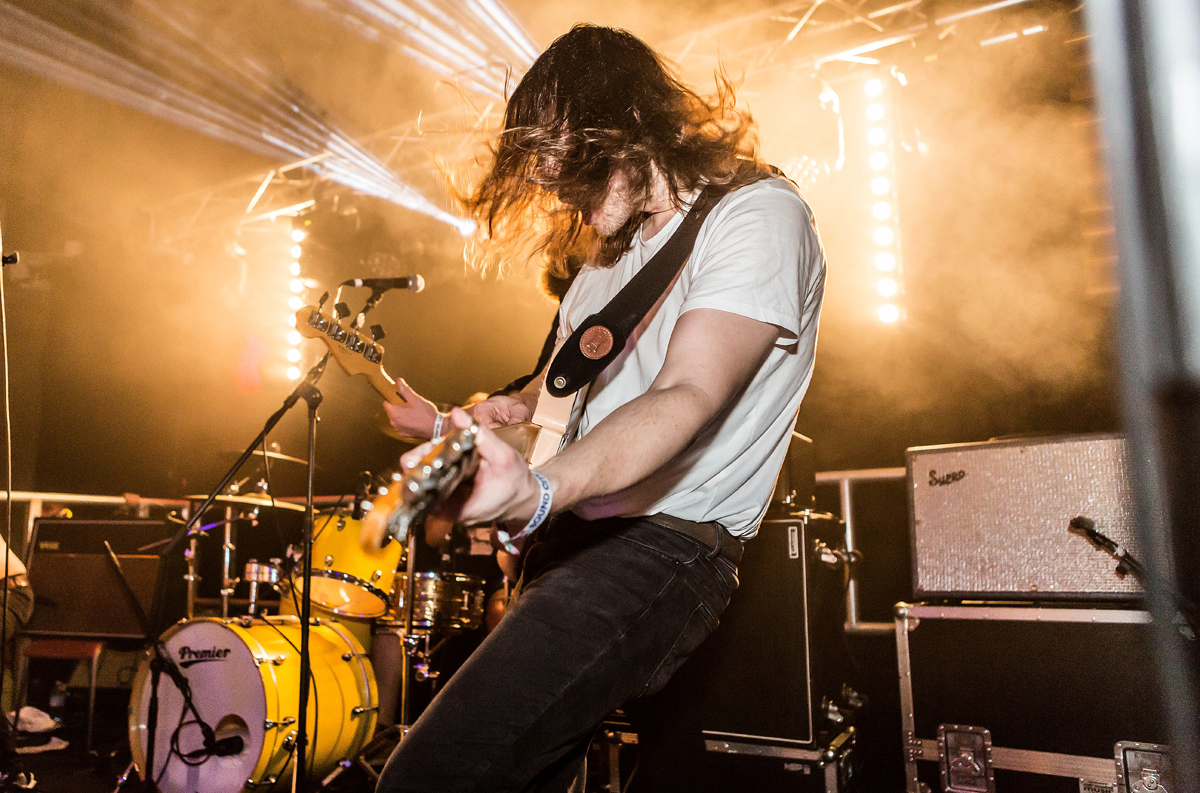 IDLES release a classic second album that defines the state of music today and Getintothis’ Steven Doherty believes the hype.

Back in 2017, if you’d have been told that a band’s second album released in 2018 would be praised as Album of the Year by many critics, with some even claiming it to be the ‘most important album of this generation’, that it would enter the charts at number five despite the debut not having charted and that it would be so well-received that there would be numerous social media posts of people buying multiple copies of it just because it resonates so much with them, then you would have got pretty big odds against it being the less than cuddly and chart-friendly IDLES.

Their debut, Brutalism, was critically acclaimed, with the band’s live performances even more lauded, yet the building of expectations prior to this second release were as unexpected as they were pleasing. With each of the pre-album single releases, the noise around the record increased.

Alongside the universally positive pre-release reviews, there were countless interviews in the music press with vocalist Joe Talbot. Interviews in which he was always portrayed in an excellent light, coming across as caring, sensitive and not afraid to speak the emotional truth reflected in his music, while discussing the challenges he faced in the making of this album (the biggest of which is explained below) in such a clear and frighteningly positive way. It would be hard not to cheer for him and IDLES, without hearing a note.

The momentum continued when they announced an October UK tour which has sold out some pretty decent sized venues (Manchester Ritz being the nearby example), while also expanding into Europe and the US, all of which added to the pre-album frenzy.

So, the album then – Joy As An Act Of Resistance.

This album, in a nutshell, is Power and Message. The first time I heard it, I felt I’d been hit repeatedly over the head with a baseball bat. In a good way. The sound IDLES make is in no way saturated, bog-standard Radio X indie-lite. The comedian Stewart Lee has described them perfectly, as he does most things, as “Snowflake Oi”.

This is impassioned stuff, the vocals are bombastic, shouted rather than sung. Drums never let up, tribal in nature on pretty much all 12 tracks. Howling guitars, impossible to ignore. A relentless, powerful noise. It’s all well and good something to say and a unique way of saying it, but it won’t find a big enough audience if the tunes are lacking (hello, Sleaford Mods). The two things are entwined perfectly here.

There’s not one ounce of fat on this record, not one second of music more than what is needed, not a wasted moment. Alongside the power comes the words, where this album comes into its own, its simply put, yet powerfully effective message, the reason that people have taken it so much to their hearts.

The album begins with Colossus, a two-part track that begins with a brooding, building eerie rhythm, that then explodes into a more typical IDLES ending. Never Fight a Man With a Perm follows, one of the album’s lyrically lighter moments despite its dark setting of the build up to a potential scrap, while still trying to mock the assailant.  ‘Me, oh me, oh my Roy. You look like a walking thyroid, you’re not a man, you’re a gland, you’re one big neck with sausage hands, you are a Topshop tyrant, even your haircut’s violent.’

The class system baiting I’m Scum completes the opening salvo with absolutely no let up in pace or fury, ‘This snowflake is an avalanche’, just one of the many one-liners that run through the spine of this album, summing up the feelings in shorthand, the sign of a brilliant lyricist.

Fresh from its incendiary outing recently on Later with Jools Holland, lead single Danny Nedelko is one of their biggest anthems already, its positive message around the role of immigrants in this country has even got them playlisted on Radio 1, the nice people of the nation (as in short supply as they are) embracing the heartfeltness.

Love Song references Dirty Dancing and sounds like a harsher Art Brut before leading into the last track of Side A (over 50% of first week sales were on vinyl, like any classic album it works best as two separate sides), the quite frankly jaw-dropping June. How this song came to exist encapsulates the whole IDLES ethos. The song was written by Talbot after the death of his stillborn daughter, and both lyrics and the accompanying howl are just harrowing; ‘Baby shoes for sale, never worn’. Heartbreaking.

However, the feeling that they are trying to make the world a better place soon returns with Samaritans, where they try to destroy toxic masculinity, boys should have feelings and be allowed to express them. Body shaming and the world of unrealistic looks is their next target on Television which contains one of their now oft-quoted on social media couplets: ‘If someone talked to you the way you do to you,I’d put their teeth through. Love yourself.’

The sneering at the 48%, Brexit-hating Great , laughing at male posers on Gram Rock and the Solomon Burke cover Cry To Me (which even though is a 60s soul classic, IDLES still manage to make sound like one of their own) precede the finale.

The album ends with Rottweiler, where Talbot channels his inner-Fall with his Mark E Smith-esque screamed vocals, followed by an intense few minutes of noisy instrumentation, after which Talbot shouts at his band-mates to ‘keep going, keep going’, ending on just one word, the over-riding theme of the album. ‘Unity!’

These are confusing, horrible times and this is a record for these times. At points, it’s cynical, euphoric and exhausted, it’ll make you want to laugh and cry, hug someone or punch a wall, but beneath all the terrible, terrible things that are happening to individuals, couples, outsider groups, nations, there can be hope.

IDLES may not have all the answers, but by God, they are going to find a solution or die trying. They sound like they will not be denied. If the world was a better place, then there would be no need for a band like IDLES. Sadly that is not the case. We are all in this together and we need albums such as this to get us out of it.

The most important band of this generation. Believe the hype.