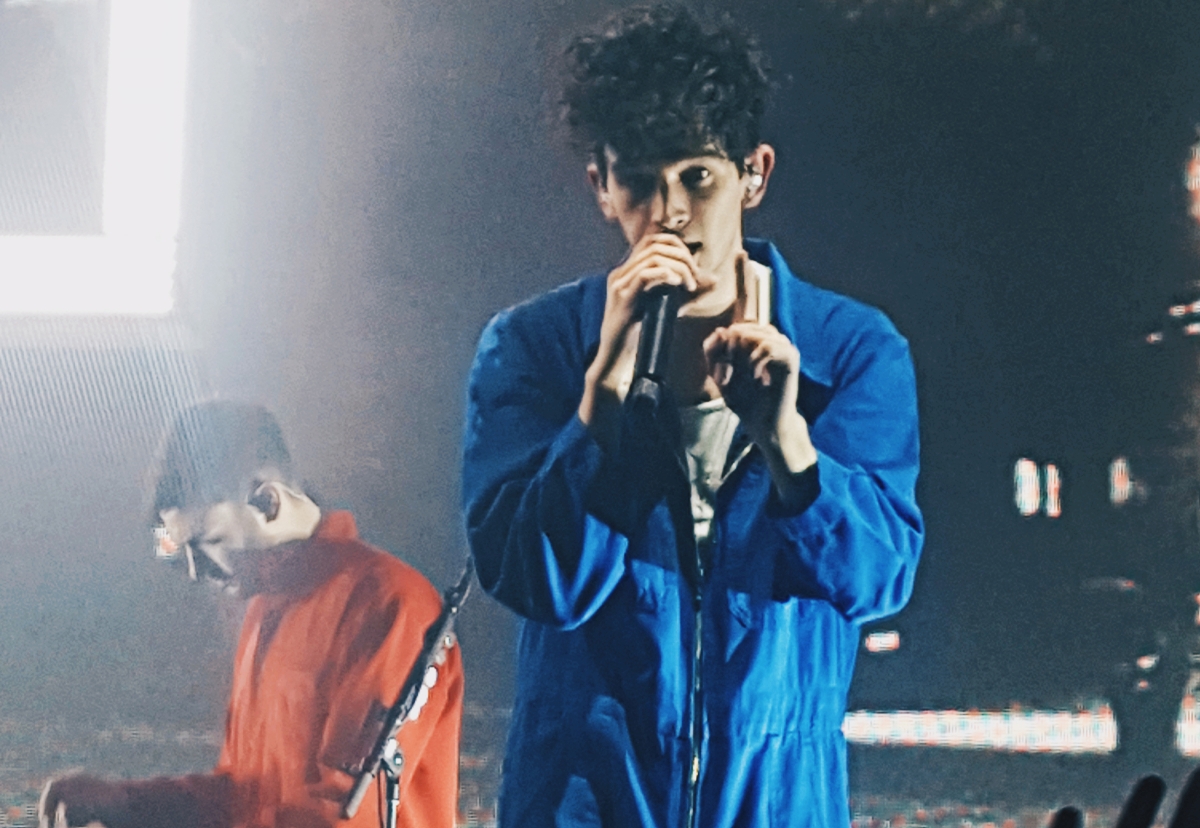 The 1975 hit Manchester and what do you know, Getintothis’ David Hughes was there to enjoy Matt and the lads.

In their first hometown show since the back end of 2016, The 1975 are back, with a show that could rival a NASA space launch.

Up first is No Rome, a Filipino electronic music label-mate of The 1975, who brings his sweet vocal hooks and groovy beats into the Arena. It’s pretty hard to stop yourself from grooving to his tunes, whether that be the upbeat Saint Laurent, or the chill and laidback Seventeen.

Despite the electronic nature of his songs, Rome picks up his guitar for a few songs, showing there’s more to him than just his ability to create catchy vocals and a mean beat.

Meanwhile, the simplistic nature of his music is satisfying, as his energy is shown through his bouncing round stage, pumping up the less than half full crowd at this point.

Up next is Pale Waves, who feel like they’ve been on tour with The 1975 forever. This is the ultimate Dirty Hit gig for some, as they start with The 1975 produced track, Television Romance.

Heather has seen some criticism in the past for her live singing, however, this tour she appears to have won over those critics, myself one of them. Playing the main hits, from Eighteen to One More Time, Pale Waves start to rev up the crowd, without, however, the normal moshing seen for them in smaller venues.

For a moment, it feels like an 80s movie, before in a flash they’re on their last song There’s A Honey and they leave the crowd wanting more.

Now the moment everyone has been waiting for. The lights and house music go down. The massive set built specifically for their show lights up.

Three From Above, The Desert, Jetsam: 81 Renshaw Street, Liverpool

The 1975 have always been a Marmite band, with the latest album lauded as the OK Computer of this generation, others suggesting anything but that. What’s clear from tonight is their ability to take any criticism and throw it in the bin and get on with doing what they love.

Opening with Give Yourself a Try, which was the start of whole new era for The 1975, the whole Arena is bouncing. And that really set the tone for the whole night.

Making use of the massive screen behind them, The 1975’s show isn’t just a music concert, it’s an audio-visual delight. With the 1975-staple light rectangle physically moving around the stage, along with three light cubes, the production on stage is incredible, every song throwing up a more beautiful visual than the last, blended with The 1975 playing the show of their lives.

A nice little feature was the conveyor belt Matty Healy kept running around on, which made Sincerity is Scary feel like you were in the music video. This all makes NASA seem low tech.

Half way through the show, Matty disappears before appearing on a lift contraption, before pushing a section of their massive screen, to form a mini stage inside the screen. Performing The Ballad of Me and My Brain from inside the screen is the most over the top, 1975-y thing to do, adding to this post-modern narrative they appear to be going for with this latest album.

Matty then returns to the front of stage and continues his egotistical, but loveable frontman ways.

Another new addition to their new show is two backing dancers, which is you’d think would be weird for the once stereotypical indie pop band, however, it works really well.

Sceptics would still say it’s a gimmick, and they’re probably right, but the Jaiy Twins earn their place on stage, with the crowd copying their dance moves at some point, while the twins fulfill the role of backing vocals when not dancing.

The 1975 played most of the hits that you’d expect of them, leaving some of the crowd a bit disappointed with the omissionof a few of their favourites, but that shows how much of a solid back catalogue The 1975 have that they can have 23 song set and people still want more. Matty even stopped half way through to democratically decide which song to do next, by engaging the crowdin a screaming competition. Paris 1. Ugh 0.

During Robbers and I Always Wanna Die (Sometimes), it was actually a struggle to hear Matty singing over the crowd screaming back the lyrics to him.

The night ended to the frantic and energetic quartet of Love It We Made It, Chocolate, The Sound and Sex, which saw the crowd reach a new level, each song bringing bigger and bigger mosh pits, something you don’t expect for the stereotypical indie pop tune Chocolate.

These final four songs showed what it made to be a fan of The 1975, having fun, living in the moment, just enjoying the music without worrying about what is happening outside these four walls.

I was a fan of The 1975 when they brought out their EPs, seven years ago, and as they’ve grown bigger and bigger, I’ve feared that they wouldn’t have that ‘special thing’ I fell in love with the first time.

While it’s difficult for me to put my finger on what that ‘special thing’ is, it’s clear and move evident than ever that The 1975 are a force to be reckoned with, and can surely become one of the greatest bands this generation of kids will ever see.