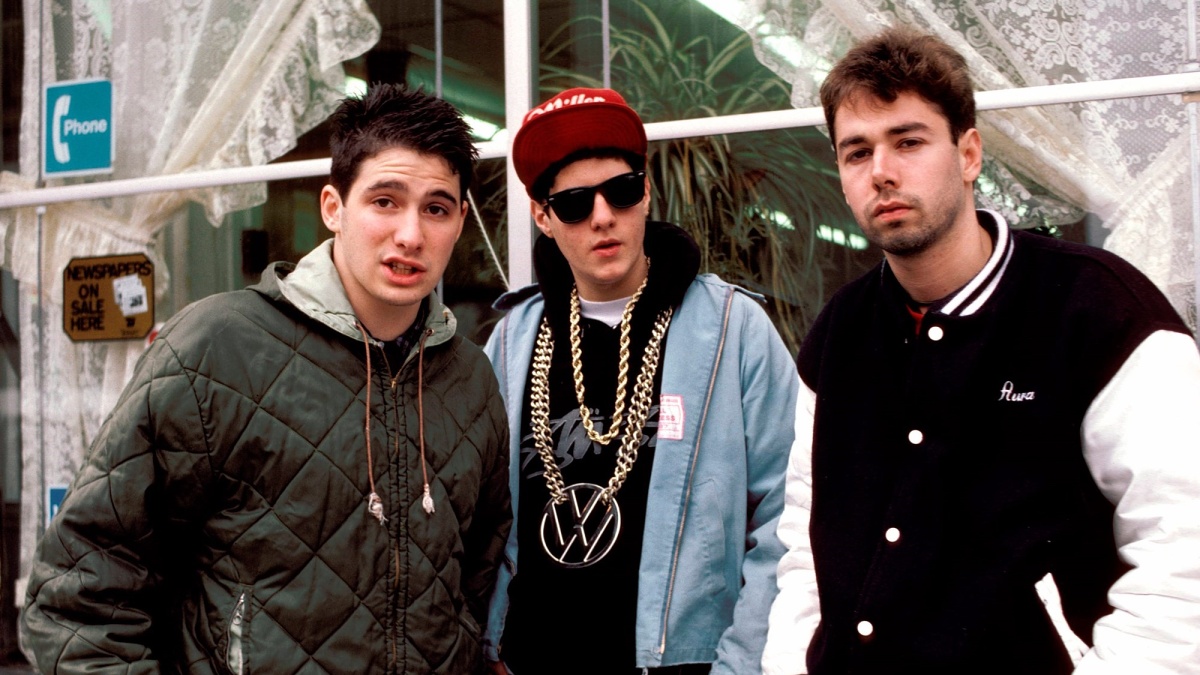 As hip hop videos break the bank, Chris Flack found some boffins to crunch the numbers to see who’s spending what and where – behold, the Getintothis BlingDex.

My introduction to rap involved The Beastie Boys.

It resulted in public humiliation in an English class in secondary school and knowing that regardless of what those philistines thought, I was right all along.

I’d heard of The Beastie Boys but didn’t have the cash to buy anything, I’m guessing at this late stage my brother was the source of that musical initiation, but the passage of time has faded the memory.

I vividly remember writing said piece on popular culture as part of a second-year English lesson and being roundly abused by my classmates, many of who remain in rural Antrim and devoid of, well, popular culture.

My piece discussed the undeniable truth that The Beastie Boys were the voice of a generation and they spoke for us all, even those trapped in Antrim in the late eighties and early nineties; whether they recognised it or not.

I remember how much I coveted a VW logo to hang around my neck; clearly, I hadn’t considered how ridiculous a scrawny kid from Ireland would look with such an appendage, nevertheless, I still wanted one.

The Beastie Boys and their VW Logo necklaces were the beginning of the madness. It was all the better if that logo was nicked.

The Beasties VW craze caused so much damage to so many cars that Volkswagon decided the easiest way to overcome the theft was to offer them free to anyone who wrote in to ask for one.

And you didn’t even have to be making a music video.

There was a time, in the mists of the mid-80s where hip hop videos had a sixth form schoolish charm, thrown together on a second hand Betamax machine with a few splashes of colour dropped in for good measure.

Kurtis Blow was the first, donning gold chains on the cover of what was to become the first certified gold-selling hip hop album.

Eric B. & Rakim wore gold pendants the size of coasters that were estimated to be a cool $100k each and LL Cool J wore rope chains thick enough to tow caravans.

RUN DMC and The Beastie Boys followed; there were countless gold rope chains, boom boxes and spotless white or solid gold Adidas sneakers; the rest followed and everything from there went a little bit crazy. 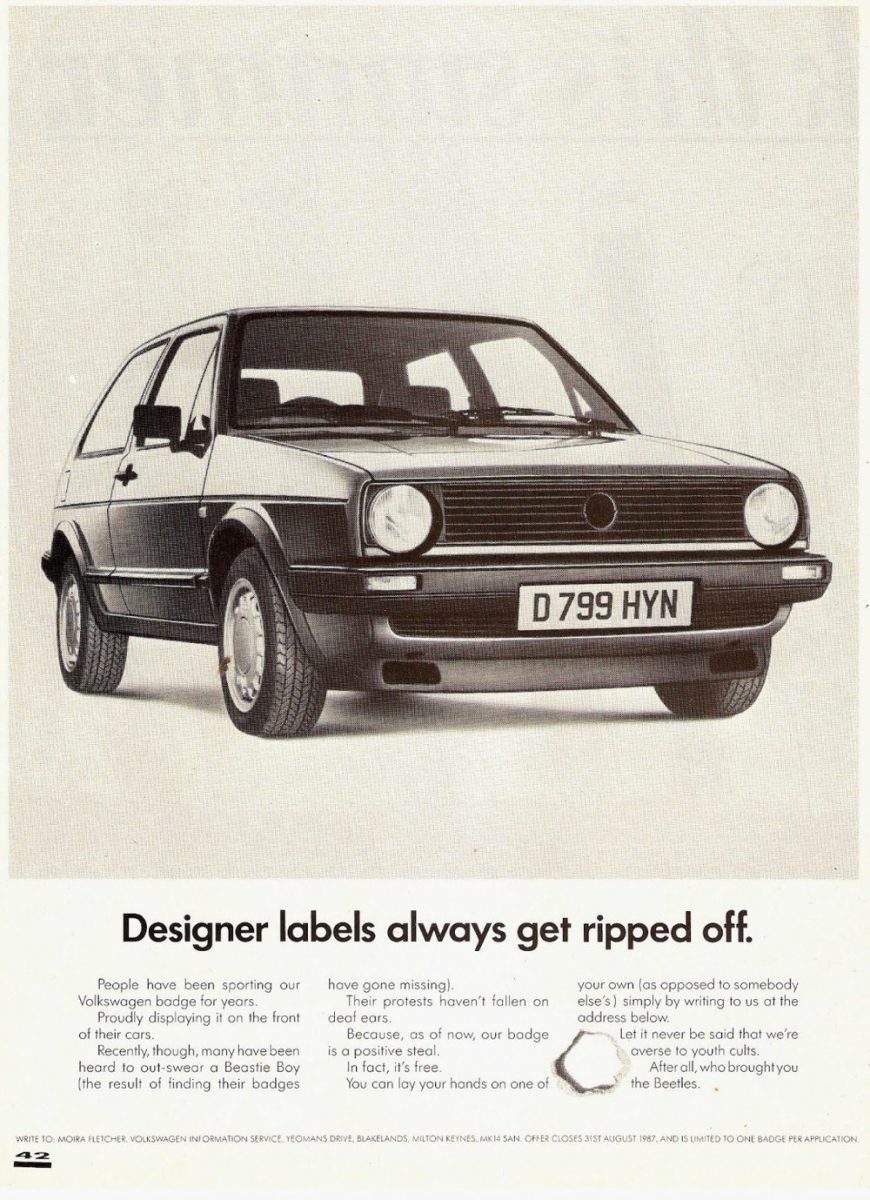 Toward the end of the nineties, something changed, the money you spent on bling, on big houses and even bigger cars, came to represent the sounds of the streets.

Gold chains suddenly weren’t enough, everything had to be dipped in jewels, bathed cash and hung around your neck like a VW logo, brighter bolder and bigger.

It was designed to tell the world how good your world was, and just how much money was under the bed.

Much of it came out in music videos, hip hop gained a reputation for astronomical levels of production and expenditure.

Not that high-cost videos was a new thing, Michael Jackson spent bazillions on videos, Duran Duran had half-naked girls in designer sunglasses on mega yachts and Elton John bought the south of France once.

In those glory days of MTV and new money, there was no such thing as too much, you want a jet, you got it, you want a mansion for weekends in the south of France, check, you want to buy an island retreat for the three weekends you get off a year? By all means, be our guest.

And then dear reader, in the age of the internet and dial-up, a cheeky chappy by the name of Napster came along to ruin the game for everyone. It, and by that we mean the general public, took its ball back, digitally of course, and the majors, all the stars, all the lunacy, came to a juddering halt.

The money more or less dried up for a few years, the mansions appeared on eBay, the jets were dumped on Craigslist and the Islands were repossessed and flogged to Russian Oligarchs.

In the year of our lord 2019 though, something has changed, the business model that so many struggled with seems to have righted itself, the unsteady ship is siphoning a little more money into the majors and a few independents and the spend on production, on shows, recordings and everything else appears to be on the up.

You can tell by looking at the videos; if it ain’t HD’d to the max, monied to the hilt and dripping in swagger, it ain’t got shit. To help you through this most recent quagmire of what could arguably be called questionable taste, the Getintothis boffins had a look at music videos since the Bling explosion began.

They crunched the numbers and drew up the tables.
We have all the information below.
We even have a top ten.

We’ve taken a look at the Billboard Top 100 rap videos and pulled out this top ten based on our estimation of their cost from what we can see on screen. We’ve based these estimations on clothing, general bling, real estate, cars, staging and their production value.

Costs crop up across a range of accounting columns, your venue, your vehicle, your vices, your gold, it all stacks up, we took a look at just where the biggest piles of cash were filed and it was a little surprising. 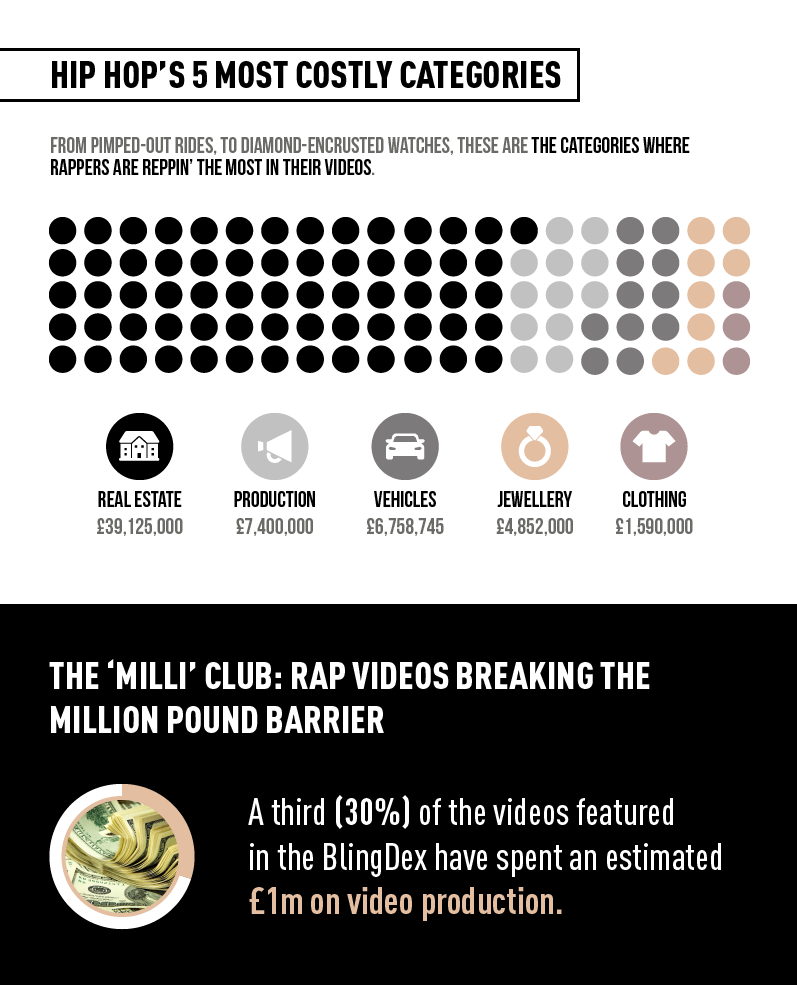 Gone are the days of boomboxes and basics, videos are big business in a world of jealousy and copious consumption, the houses have to be bigger, the brands better and the bucks more banging.

Clothing has always been crucial, branding both personal and what you put on your back is critical.  What started with Adidas now ends with Zenith, and it all costs a pretty penny.

The days of teenagers dropping into their nearest sports store to grab a pair of sneakers is gone, there are much greater demands on people pockets.

The question is though, which of our artistes spends the most on their favourite brands? 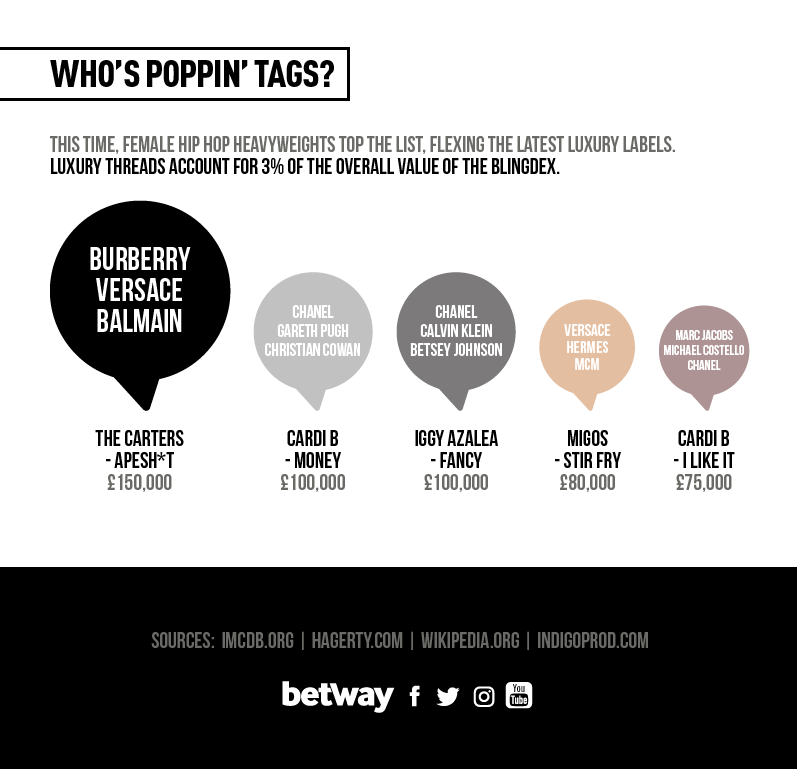 Since the early days of the combustion engine cars and money have always gone together, that the humble motor vehicle in all its excess plays a huge part in music videos is no surprise, but the balance between money and history is a fine line.

In the early days’ rust and ruin was seen as cool, your old car was put through the wringer, hydraulics were added to those rust buckets and the higher the car the higher the value, and the cooler the occupant. These days, its all about the bling, from Aston Martin to BMWs, the car is the star and chrome is king. 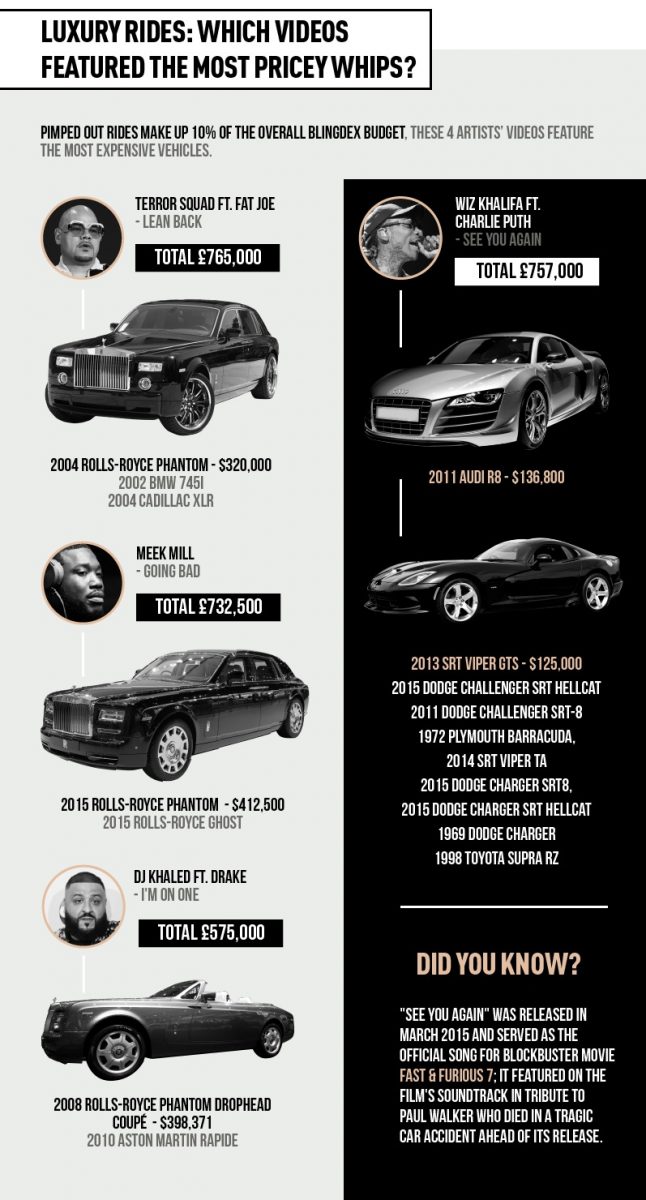 While some of our favourites started in the brownstones of the lower east side, rap, hip hop and money are always on the move.

The film production world will go where the money is, they will chase the government grants and head to the vacant spaces wherever they may be.

If someone says the money is in a desert on the west then there they shall go.

The NYC brownstones are a thing of the past, the She’s Gotta Have It vibe is gone, it’s all about mansions, mega pools and millions. 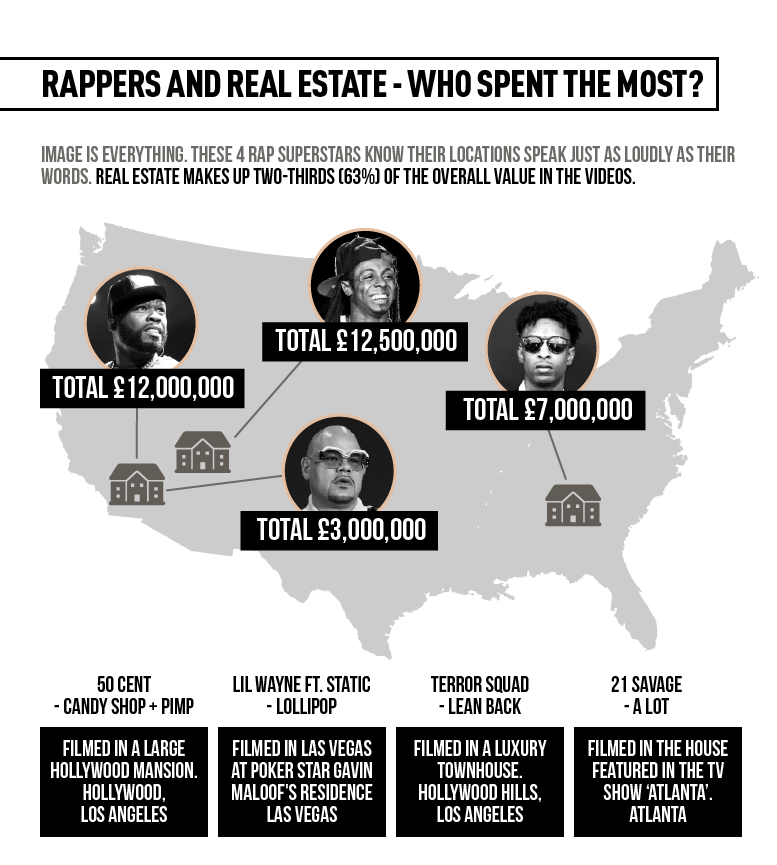 We’re nearing the top of the pile at this point, the money, the bling, the cash flow is becoming a little too much to bear, especially sat here in a two up two down on Smithdown Road.

May we present our top three Hip Hop money spending, bling ballooning, blockbuster artistes who between them spent around the better side of a cool $30 million dollars on three videos. 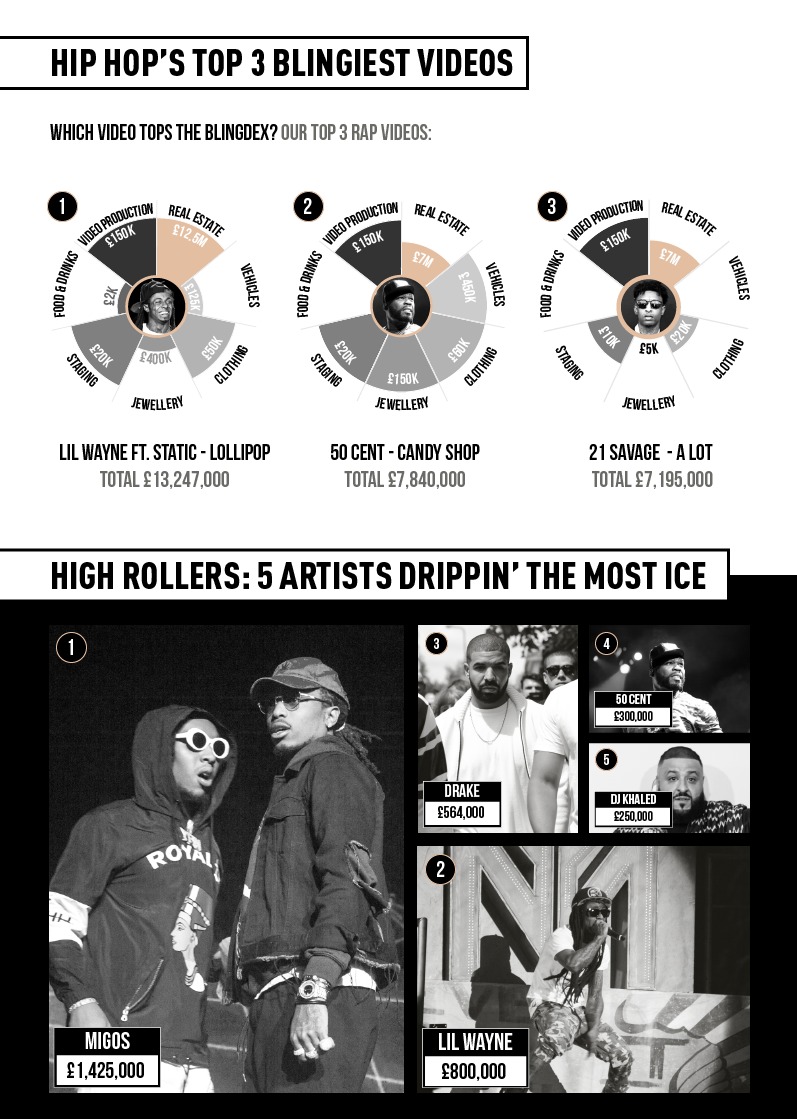 Our top ten is a veritable who’s who of the big spenders.

This list starts in the heyday of the mid-2000s and brings us bang up to date with a whopping megalith from 2018 coming in at almost $8 million.

The video for 21 Savages‘ A Lot might just be the start of a new bling war. 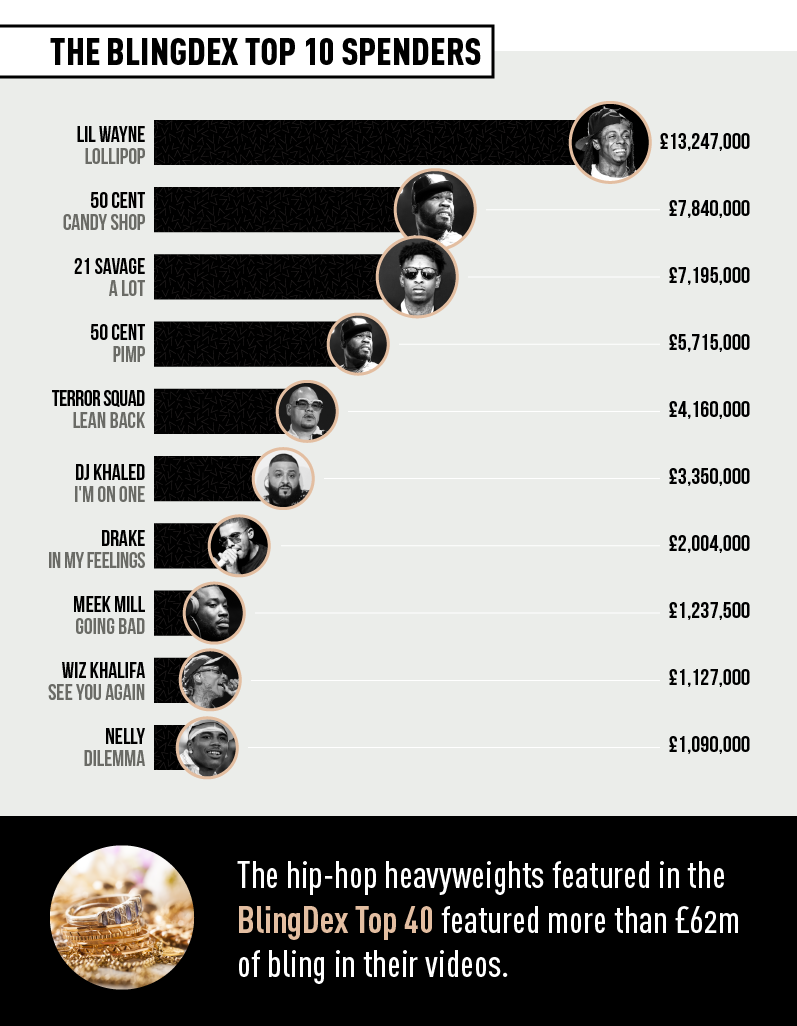