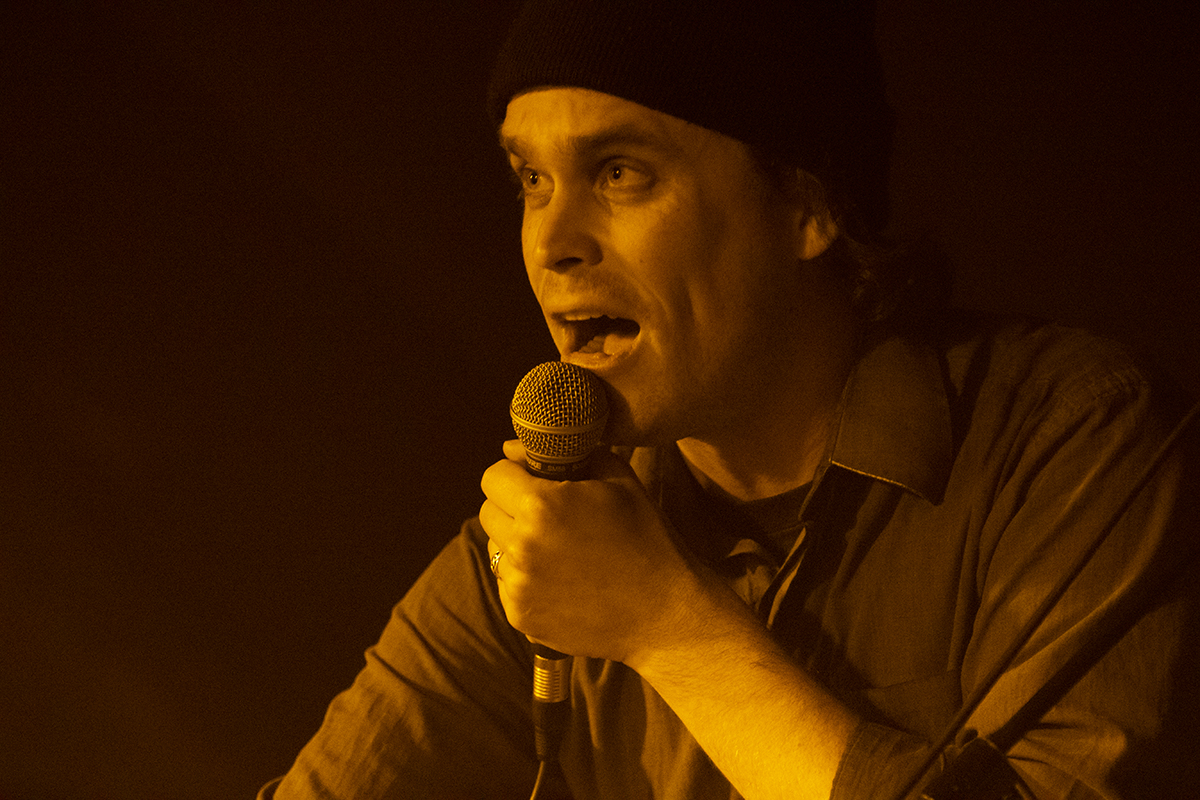 Peter Broderick brings the legacy of legendary composer Arthur Russell to life in 24 Kitchen Street, Getintothis’ Peter Goodbody was there for the reincarnation.

The music of Arthur Russell was once described by the poet Alan Ginsberg as Buddhist Bubblegum.

Russell was a composer and cellist operating around the fringes of the New York disco scene in the 70s and 80s. And if that seems like an odd mix, then it’s because it is.

Russell played with all sorts of music styles and genres and before his death in 1992 he’d collaborated with musicians as diverse as Steve Reich, Philip Glass and David Byrne as well as many underground DJs in America.

It’s a sad legacy that he is perhaps better known now in death than he was during his lifetime. He was notorious for not finishing projects and apparently he left behind thousands of cassettes and DAT tapes, many of them comprising different mixes of the same song.

Peter Broderick has worked closely with the Russell estate over a number of years to arrive at this series of gigs to recreate some of the music that Russell left behind.

First up, however, we have Nick Branson & David Kelly. Combining sax and percussion to create the musical equivalent of a Jackson Pollock painting. It’s all seemingly random, but actually delivers some really cool patterns.

The half hour set gives us only three pieces, but that gives time for each one to develop, to rise and fall, to play with rhythm and noise. It’s by no means our usual fare but it was all the better for that.

Claire Welles announces she’s going to play us some pop songs, which is what we get for the next half an hour.

With a smattering of tracks from her new album, Transpose, Claire says she has a sore throat from a recent illness, which she acknowledges and makes the inclusion of a new one, Viral Infection quite apt.

Her electronic pop is drawing in the numbers and is going down well.

“I’ve got cassettes for sale. They’re £5, it’s my new album and it comes with a download code. It’s really good. It’s my Nevermind. You’re not meant to laugh”.

Claire’s voice is just about holding out as she finishes her set with album tracks Shit For Brains and Knowsley.

She says there was to have been one more, but her voice couldn’t handle it. After a bit of dissent from the crowd she changes her mind and finishes off with New Build. The one she previously described as a banger. She gets there in the end, just about. The audience appreciates the effort.

Peter Broderick asks for hush as he starts off slow, solo, looping a couple of chk sounds over a simple rhythm. The vocals kick in as he layers in effects and reverb for the opening number. But that’s it for the electronics for now. They’ll be back.

“”Does anyone here know anything about Arthur Russell?” Big cheer. “Thank goodness for that” says Broderick. “You don’t need the big lecture I had to give the Aberdeen audience last night”.

He starts off Losing My Taste for the Nightlife and stops half way through the first verse. “I’m completely butchering this song. I’ll start again. It’s one of my favourite songs to do”. Good move. It’s a rather beautiful but of stripped back music, just Broderick and an acoustic guitar enriched by his quality voice.

Apparently Russell played cello on this one, but Broderick admits he couldn’t figure out what he was doing. So, guitar it is for tonight.

After another couple of songs accompanied by a violin (one of which is called Eli, about Russell’s dog), the rest of the band comes on stage.

If ever you think you can’t be bothered with #livemusic just get out there and you might see something extraordinary such as Peter Broderick @24KitchenStreet reworking 1981’s Arthur Russell / Dinosaur L masterpiece “Go Bang” last night ! pic.twitter.com/F3vEYBuNGa

Guitar, bass, drums and an electric violin obviously give us a much fuller sound. But what sound?

We’re quite quickly getting a flavour of Russell’s eclectic styles. Ballads, Country, Reggae, electronica. Broderick and the band switch instruments with ease from guitar to violin, from violin to keyboards. It’s a fitting tribute to a man who refused to be boxed into any particular category.

“This one requires a volunteer”. It’s a collaboration Arthur Russell did with Alan Ginsberg. “I need someone to be Allen Ginsberg“, says Broderick.

There’s a consensus in the audience Claire Welles should do it, so she steps up to read the Ginsberg lines in between Broderick playing violin. She doesn’t look like much like Ginsberg, but then, who does?

Now for the last number. Broderick asks if the mirror ball can be made to work. “You’re just gonna have to use your phones” and he launches into an NY disco number.

It’s a complete contrast to the rest of the set. It is, of course, one of the highlights. Someone finds a long stick and pushes one of the spots so it shines on the mirror ball. Massive cheer. Kitchen Street is bouncing.

It has been something of a learning curve tonight. We will admit to have known little about Arthur Russell before we arrived. So, thank you Peter Broderick for giving us an hour long lesson looking back at the career of this most multi talented and genre defying composer, producer and all round good guy.

You serve his legacy well. 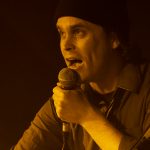 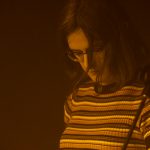 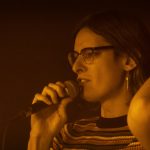 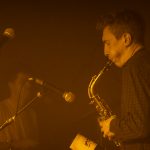 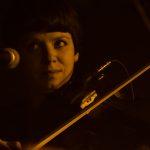 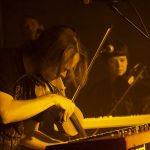 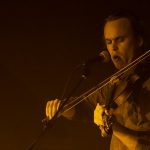 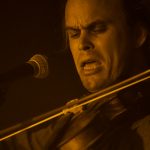