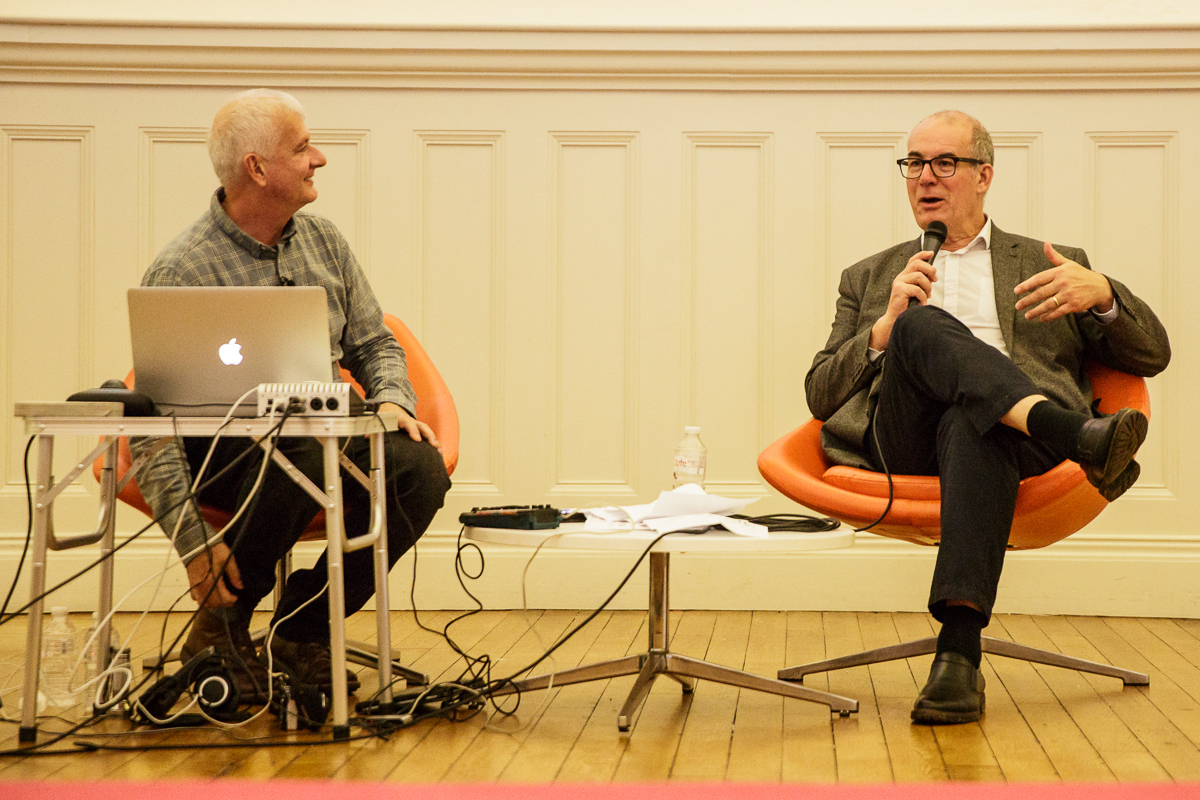 The Beatles’ Abbey Road was the subject of a special discussion event at Liverpool Central Library, Getintothis’ Keith Ainsworth was there.

The Beatles’ Abbey Road album is 50 years old this week.

It was the last thing they recorded (Let It Be was recorded before but released afterwards). What techniques and technology went into its creation?

First though we are treated to a pleasant surprise.

The Library Of Soul choir led by Kaya Herstad-Carney present us with excerpts from Abbey Road. You would never guess it is their first public appearance.

Their excellent arrangements of the songs are perfect to whet our appetite for evening with the fab four. They meet on Thursdays and are looking for new members if anyone out there fancies joining.

Steve Levine presented a BBC radio series several years ago called The Record Producers. This looked at the work of famous record producers and handily George Martin was the subject of one show.

To help with his analysis Paul McCartney gave him access to certain multitrack stems. These are the original separate instrument recordings that were blended together to make the final records.

He tantalisingly describes a safe with a hard drive in it containing all the Beatles output. Happily this means we get to exclusively hear certain Abbey Road tracks broken down into their component parts. The Record Producers is currently being repeated on BBC Radio 2 so can be heard through the BBC Sounds app. It is recommended listening.

David Quantick introduces the evening by setting up where the Beatles were in their career in 1969. The sessions later named Let It Be had not gone well. Producer George Martin’s input on those sessions and the White Album had been slightly hands off with his relationship with the Beatles maturing and changing.

Now though he received a phone call from McCartney asking him to produce the band like he did in previous years. This was to be neither the psychedelic extravagance of Sgt. Pepper or the back to basics of the White Album.

This was a contemporary album that didn’t shy away from the latest techniques in production. Pop but still experimental.

Despite its current reputation that generally has it in the top three Beatles albums it was not reviewed well at the time. Quantick reads us a few selections. The New York Times was particularly harsh calling it an ‘unmitigated disaster‘.

Levine explains that this was their first album recorded on eight track. This was despite EMIs reluctance to let them use the new equipment. This meant that early sessions were performed at Trident Studios on their eight track machine. 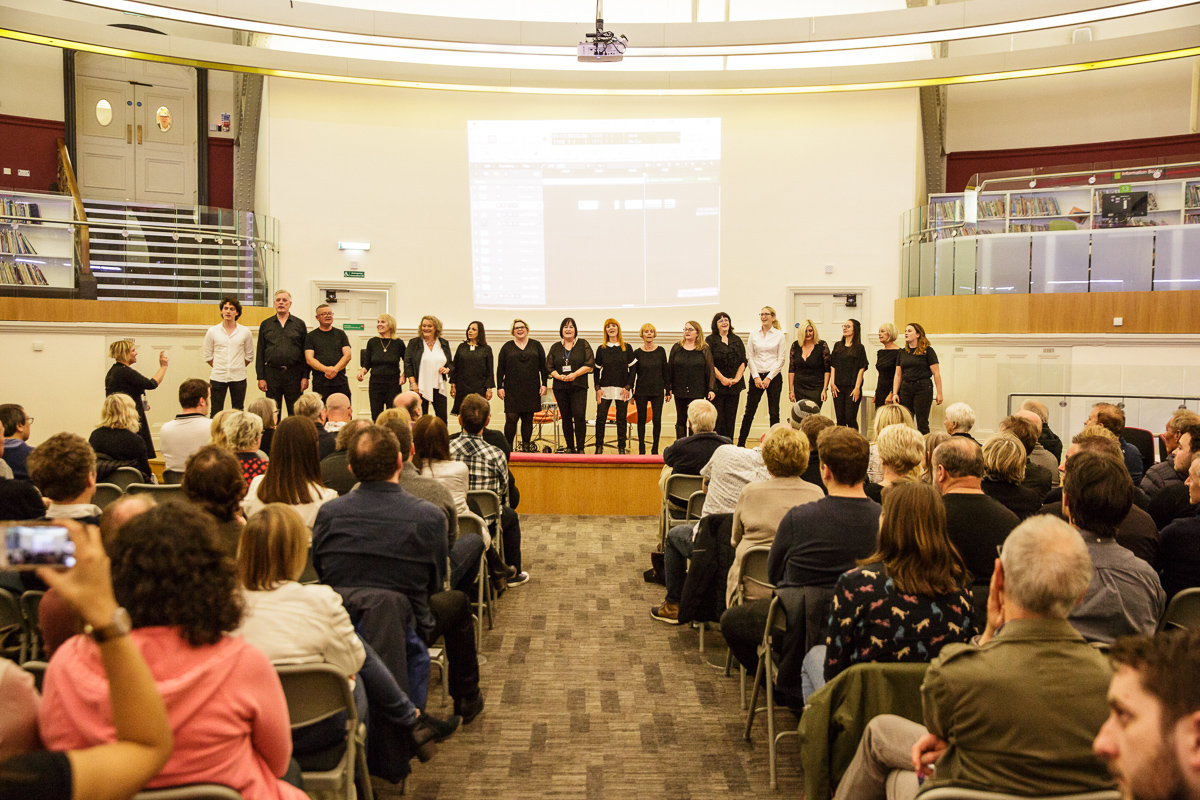 The Library of Soul Choir

The new deluxe box set of Abbey Road includes a bill for £318 for the recording of Lennon’s ‘I Want You‘. That’s an astounding amount of cash for the time. The kicker is that the song was later re-recorded meaning that those recordings were never used.

As well as the 8 track machine, the album was record and mixed through a new transistor desk, the TG12345. This gave the album a smoother and more polished sound. To today’s listeners it’s also a more modern sound.

Levine’s laptop running Pro Tools plays us both the music and many George Martin interview clips through the evening. First we have a breakdown of the harmonies on Because. These benefitted from both the band’s growing influences and the flexibility extra tracks gave them to realise their ideas.

We hear a sound clip of Jeff Foskett an arranger who worked extensively with Beach Boy Brian Wilson. He breaks down how complex harmonies are created piece by piece in the studio then combined to marvellous effect. Here Smiley Smile period harmonies influenced the fabs.

Made with the three Beatles around one microphone the vocals were triple tracked. No autotune needed.

Cutting edge technology also appeared in the form of George Harrison’s huge Moog 3P modular synthesiser. A rare beast in 1969 this cost a stupendous amount of money. In the end it was subtly used on four tracks. Listen out for its use in a beautiful counter melody on Here Comes The Sun.

Levine now plays us a recording in which Lennon receives the news of complaints about noise from the neighbours during a session for Come Together. He diplomatically says they should try one more loud, then see if the song works played quietly.

Come Together was one track in which the backing was first done on a four track recorder. This was then transferred to an eight track tape where additional instruments and a fresh main vocal added. If you listen carefully you can hear parts of the original guide vocal captured by the microphone for the drums.

Speaking of drums Ringo was nearly always recorded in mono. For Abbey Road we now have him in stereo. Check out the new mix to hear his tom tom work in stereo.

On Come Together Lennon’s vocals are tightly double tracked in what would be his preferred technique for his solo career. George Martin printed the echo onto the recording rather than adding it later when mixing. In the opening Lennon quietly says something whilst clapping. In the released song the bass almost obliterates this. Levine played us an earlier take.

Without the echo and bass we can hear clearly what Lennon is saying. Soberingly his words are ‘Shoot Me‘.

The top quip of the night comes from Quantick who describes Octopus’s Garden as ‘Ringo’s second best underwater song‘.

Ringo Starr during the recording of The Beatles' "Abbey Road" pic.twitter.com/Qzbw699vks

The medley on side two of the original vinyl LP is rightly regarded as it’s high point. McCartney currently finishes all his gigs with the medley. Although made from small fragments of incomplete songs here the whole is more than the component parts.

We should remember that the technique of cross fading from one part to another was quite complex in those days. But it influenced artists such as Stevie Wonder whose albums around this time became continuous sound pictures.

In addition this is a basic building block for progressive rock. Consider the work of Pink Floyd and Yes and unconnected sections that are linked together.

Key and tempo are important factors in how the sections fit. A track on the new session CD includes an early trial for the medley named The Long One. This has the song Her Majesty in its middle. It patently stops the flow so was removed.

The End rounds off Abbey Road with Ringo taking his only ever drum solo followed by McCartney, Harrison and Lennon trading two bar guitar licks. This isn’t a group of old rockers on these tapes. This is a young group at the height of their powers. In the summer of 1968 George Harrison was still only 26 years old.

Analysing great music doesn’t rob it of any of its magic. If anything the details revealed tonight by Levine and Quantick have enhanced our appreciation of what was done all those years ago.