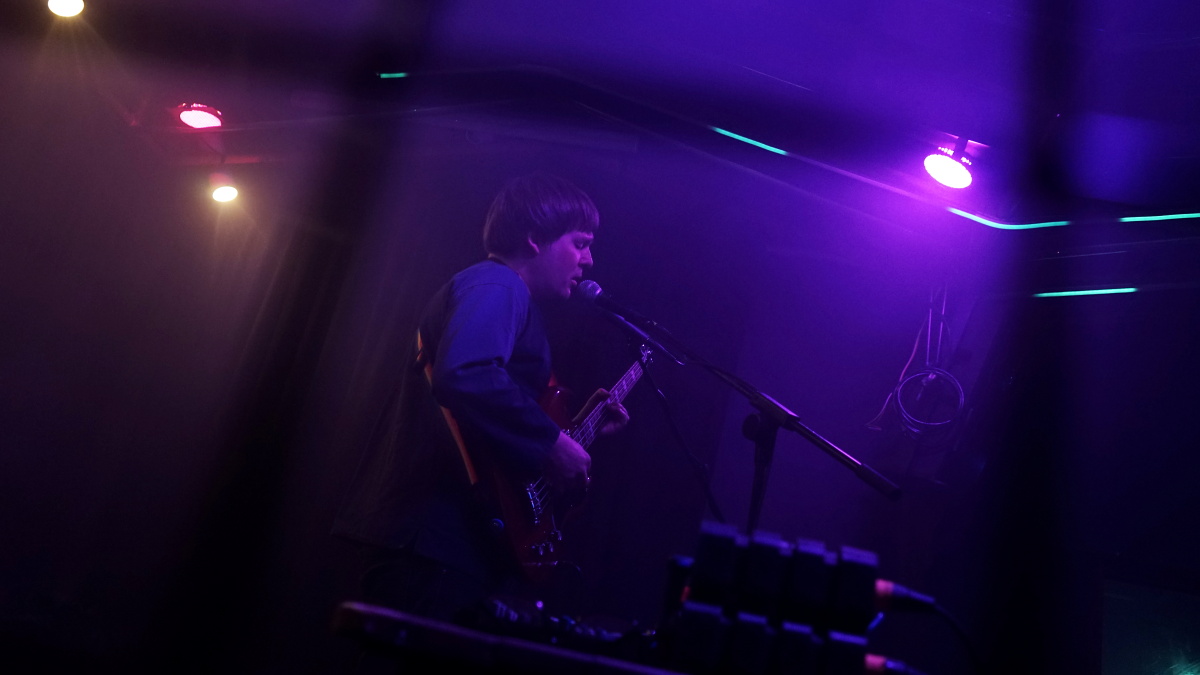 Alexander Tucker brings his latest album to Liverpool as part of his UK tour, Getintothis’ Matty Loughlin-Day went to see what it’s all about.

Tucked away in the corner of the Kazimier Garden lies another hidden gem in a city that already has its fair share of fabulous blink-and-you’ll-miss-it spaces for the arts.

Like venues such as the North Shore Troubadour or Drop the Dumbulls Gallery, the Kazimier Stockroom is a venue that would be hard to trip over, lending it an air of seclusion and – yes – coolness. I’ve struggled to come up with a better word than that, but for the lack of a more flexible lexicon, the small room, decorated with strip lighting, a smoke machine and a bar does, ultimately, feel very cool.

It’s not perfect (more later), but it does appear to be an ideal space for emerging acts and those on the fringes of the mainstream, in that the room affords an air of intimacy and also ensures that a smaller crowd does not leave the room feeling empty.

We’ve all played, or attended, gigs in places like The Zanzibar for instance, where a relatively healthy crowd size is dwarfed by the empty space of a big room, creating a feeling of detachment; here, however, that’s not an issue, as demonstrated by the night’s opener, Alex Germains, under the moniker of Germanager, who plays to a small, but growing crowd.

Armed with only an iPad, the first half of Germains’ set sounds like a condensed version of Mort Garson covering the b-side of Kraftwerk’s Autobahn album, with added fragile vocals. The set takes a song or two to settle into itself and isn’t helped at times by the noise that spills in from the busy, thumping Kaz Gardens, but with songs as strong as Classix, this matters little.

There are hints of Dutch Uncles and Pictish Trail in the electropop of such songs and Germain interacts with the crowd in between songs in a genuine way, so much so that even the obligatory “are you having a good time?” doesn’t feel forced or cliched.

This writer is no technophobe, yet has no knowledge of creating music on much more than six strings, so there is a chance my own ignorance/naivety plays a part in my perception of things, but at times, the sound feels somewhat stunted by the limitations of using only an iPad.

The sound of swirling strings on My Lady’s Broach nearly sounds brilliant, but does ultimately sound like someone playing it on an iPad.

Maybe that’s a tad unfair, as we couldn’t expect everyone who uses a string sample to bring along a full quartet, cellos and all, and we’d imagine that on record (i.e. not live), it would sound much more integrated and realised, yet with most parts of the songs sharing the same space and volume levels, certain parts of the set do lack a certain colour.

That being said, the introduction of a melodica aids with this, adding more brightness to the sound and helping the set sound ‘live’ and the second half of the set is a much more punchy, straight to the point affair, with songs being much shorter and ending abruptly.

Maybe a little rough around the edges, Germanager nonetheless delivers a fine set and we look forward to seeing how he develops and grows over the near future. Top marks for the Gibraltar cap, too.

Next up is Silvia Battista, an artist with a long history of performance across a plethora of mediums. Tonight, she is accompanied only by an accordion and a bass drum, delivering what she describes as “three movements on power, metamorphosis and death”; not a typical Friday night out, granted.

The three songs are based around repetitive accordion riffs, consisting of no more than four notes and at times, a single bass drone. On top of this, Battista recites poetry and during the second movement, thumps on her great big drum.

Sounding much like it would be very at home on BBC Radio 3 after dark, this is very black and white music, in that you’d either love it or fucking loathe it – there’s very little room for sitting on the fence.

That being said, in line with the thinkings of Dialectical philosophies, it could be considered, rather than opting to occupy a middle ground, it may be possible to hold two opposing beliefs and opinions simultaneously; namely that this is a tough listen, a challenging, borderline unpleasant experience, that is at the same time intriguing and fascinating.

The final piece, Father is a provocative piece, somewhat resembling a primal scream therapy session, addressed not just to Battista’s father, but to the patriarchy in general; “Father, I forgive you but I chose not to forget.. Father, fuck you!”

Again, the sound of the outside pandemonium does bleed through and threaten to take us away from the atmosphere the performance aims to create, yet with the set only consisting of three songs, it doesn’t overstay its welcome and more than anything, as hinted at earlier, it is to the city and venue’s credit that there is a space for such a performance to take place on a Friday night.

In between sets we are treated to a DJ set from Emily of Stealing Sheep that keeps things electro and before long, it is time for the main act.

The bass guitar is the unsung hero of modern music; an integral part of an act’s sound that rarely catches the ear or takes centre stage, yet remove it from a song and the floor suddenly collapses.

As such, given the sonic limitations of the instrument that primarily acts as the backbone of a band as opposed to the face, the number of acts who utilise the bass as the central focus of a live show is relatively (i.e. very) low.

It is with great interest therefore to see tonight’s headliner, sometimes Grumbling Fur man Alexander Tucker take to the stage armed only with a Fender SG bass, two microphones and a sequencer.

Opening with Energy Alphas, the lead track from his latest album, Guild of the Asbestos Weaver, the long intro serves as a relief after the bleak, claustrophobic sounds of Battista. The vocals eventually enter, bringing to mind Ian Curtis and Alan Vega, swimming in a sea of Eno-like ambience.

The two microphones are utilised well, with one apparently ran through a phaser, creating a shimmering effect and as the songs continue, the bass itself is used to increasing effect, with an array of pedals employed to create a swelling, abrasive noise that gradually takes up the whole room; the wise amongst us wear ear plugs as the distorted bass surges to a Jesus and Mary Chain level of feedback and white noise.

It is certainly the first time that this writer has seen a bass player hunched over an amp in order to get feedback and it is thrilling. Tucker too appears to be enjoying it too, swinging himself and the bass guitar around the stage, whirling around inside this cacophony of noise, whilst playing lead style riffs.

The droning aspect of the set also recalls Panda Bear and Suicide, however after a number of songs, things start to become a bit one-dimensional and the trick of slamming down on the bass effects pedal begins to wear a bit thin.

Returning back to the earlier point about the bass in general, there is a limit to what one can do with it and with many songs largely, understandably, being built around root notes, it does mean there is little room for subtlety or variation in sound.

That being said, Montag does veer away from this and is built around a more melodic bass line that doesn’t depend on a chugging, pounding riff, but rather, uses a busier rhythm that feels like a break from the previous few songs. Similarly, Gloops Void uses a jarring, menacing underlying ambience that is in contrast to the song’s melody, just as the screeching strings of Scott Walker’s It’s Raining Today offset the rest of the song.

We must hold our hands up and state that the overrunning of events and the prospect of missing the last train home meant we had to leave before the final song, so for all we know, the last song could have featured bagpipes, afrobeat and flutes, however we were left with the feeling that we have heard enough to get a grasp on Tucker’s sound, for this tour at least.

That’s not to say affairs were boring, far from it, but a bit of variation might have propelled this from a good gig to a great one.

But, all being said, the fact a night like this was held for a very reasonable price in an excellent venue, offering forward-thinking and at times challenging music should be applauded.

Given the impending gentrification of the Baltic area, that will inevitably start with the closure of Constellations, it is heartening to know that gigs like this are still thriving.

The alternative scene is still alive and well, you just have to know where to look. 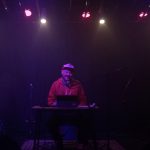 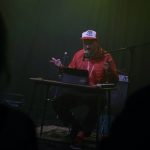 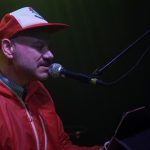 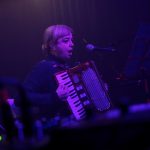 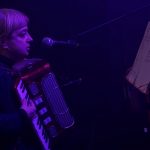 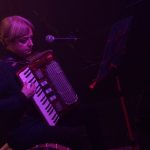 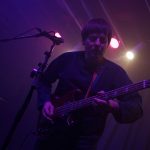 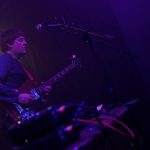 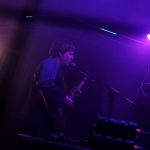 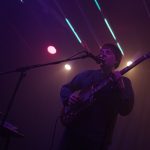 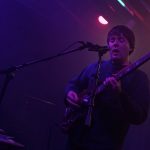 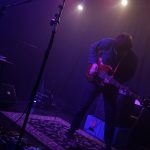