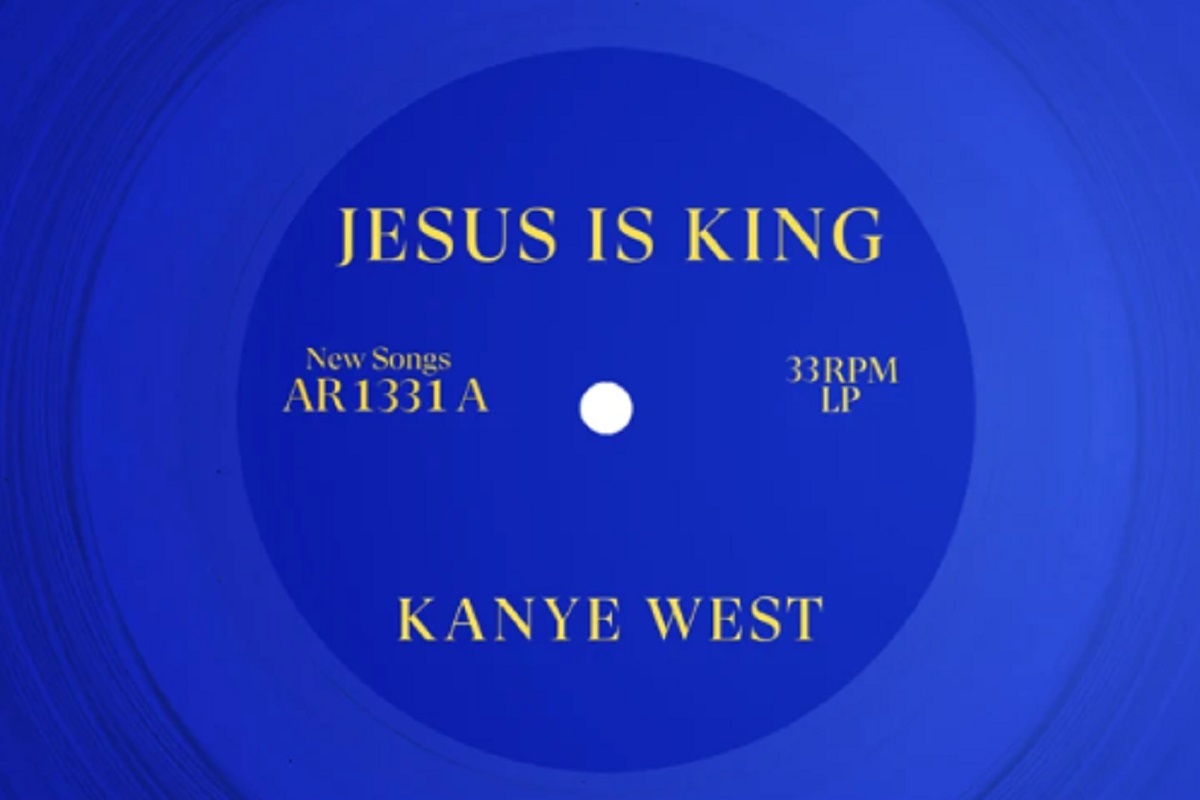 As Kanye West’s hotly anticipated album Jesus is King lands with an accompanying IMAX movie, Getintothis’ Roy Bayfield volunteers to get caught up in the rapture.

It’s a cold, wet Saturday morning and Liverpool One is still waking up.

Outside the Odeon, 123 damp souls are gathered, waiting for the doors to open. People shuffle to keep warm, talking quietly in pairs and small groups. It’s really too early for this but here we are – drawn by the global cultural event that is Kanye West’s Jesus is King.

Finally admitted, we rise up the escalator levels and sit in the warm cave of the theatre. Gentle music plays and gorgeous swirling colours fill our vision. It already feels spiritual and sublime and this is just the Odeon IMAX visual.

Then it starts – massive ‘Hallelujahs’, choir and organ at ribcage-vibrating volume. We’re moving through a tunnel, seeing a concrete structure with a giant opening to the sky. “The time has come…repent…”

To say Kanye West’s ninth studio album Jesus is King has been hyped would be a woeful understatement.

The fact that Jesus is King was supplanting the long-awaited Yandhi and the declaration that it would be a ‘gospel’ record set the PR ball rolling.

Trailers, teasers and on-again off-again release dates all contributed to the sense of expectation, until its arrival was being watched for by the hour.

West, never a serious candidate for a World’s Humblest Man competition, made his notorious claim to be “unquestionably, undoubtedly, the greatest human artist of all time.”

All of these talking points are part of one big story – Kanye and Christ.

In that narrative Jesus is King is the culmination of a logical journey – the full expression of a faith that has evolved through stages,

Kanye’s art and life making retrospective sense in the light of a truth he has now found. In this story all the mistakes and missteps of the past become examples of the sinful nature he shares with all humans – or, as in his explanation for the MAGA hat incident as “God’s practical joke on all liberals”, examples of God speaking through Kanye.

Back in 2004 he was appealing for God to “show me the way because the Devil’s tryin’ to break me down” on the storming Jesus Walks – the way has now been shown to him. But can he show it to us?

Many artists have religious beliefs of course, but as with all things ‘Ye this spiritual turn has been a big production – his Sunday Service performance events, Bible study with a pastor, declarations of lifestyle changes all pointing to serious commitment to a particular form of conservative, rule-based Christianity.

So as the hours ticked by waiting for Jesus is King to drop many wondered exactly what we would be hearing.

A Sermon on the Mount for 2019? A Songs of Praise episode so potent that Thora Hird would be forcibly resurrected? Sublime silliness?

What we in fact get is a sincere if somewhat uneven album that brings together rap, electronica and gospel in 27-minutes of religious praise – filtered through the lens of West‘s self-image.

We jump in to Every Hour, a bright high-energy workout from the Sunday Service Choir – a piece that sets the tone of ecstatic praise. Hitting treble notes that are on the verge of screeching, there’s an urgency and joy to the opener that is never quite achieved again in the rest of the album.

Declan Welsh talks new album, comedy and playing in the birthplace of Jesus

Selah, a Hebrew word of unfixable meaning familiar to Bible readers as a frequent interjection in the Book of Psalms, is the title of track two.

Doomy electronics, apocalyptic percussion and more choir feature in the album’s most arresting track. The lyrics are a manifesto for “the army of god”, set free by the Word – “We got the product, we got the tools / We got the minds, we got the youth / We goin’ wild, we on the loose”.

Follow God, built around a soulful sample from Whole Truth, is a driven testimony about what it means to be Christlike. Then we get Closed on Sunday, widely mocked for its Chick-fil-A references.

It’s a rather sweet song about getting Sabbath family quiet time away from society and social media – using the Christian-run chicken sandwich chain that does indeed close on Sunday as a praiseworthy example.

Pierre Bourne-produced On God perks things up with some more straight-up preaching. We get a sense here of the kind self-improvement, business-friendly God being channelled on Jesus is King – prisoners “can still be anything you wanna be”, and if you’re looking for someone to blame for the high prices of Kanye’s clothing line, that’s “on God”.

And on it goes.

Everything We Need is soft-textured and expansive, its message less obviously religious unless it refers to a self-sufficiency achieved through spiritual orientation.

Water has Ant Clemons vocals, throbbing synthpop sonics and lyrics about purity, being clean and being forgiven – with a hint of ‘goofy wit Ye’ asking Jesus to “Take the chlorine out our conversation”. God Is is so syrupy that it sounds like a pisstake.

Jumpy collage Hands On justifies the album against anticipated criticisms from “the Christians” (in general, not the band.)

Use this Gospel reunites Pusha T and No Malice as Clipse to hum and sing over a meditative and tuneful track that also features a smooth sax solo by none other than Kenny G. Then Jesus is Lord, a simple hymn with splashy triumphal orchestration, lands the album with an abrupt finish.

Musically, Jesus is King is something of a mixed bag – worth a listen certainly, more a series of vignettes than a coherent album. It’s hard to imagine anyone thinking this to be his strongest work, even if he is the “greatest human artist”.

But maybe enjoying it as a music recording isn’t the point. “I’m not here for your entertainment. I’m an evangelist,” said West in a trailer for the IMAX movie.

If we take him at his word, Jesus is King should be judged by its effect on inspiring repentance and conversion rather than its musical qualities.

Generally, people don’t like being preached at – look how the guy in front of a flipchart in a high street sermonising through a microphone struggles to make eye contact with the passing throng.

By contrast, West will get a hearing from millions for his message.

But any message here is as much about West‘s perspective as it is about the divine. It’s often hard to tell if he is openly revealing his flaws or engaging in bombastic self-justification – confusions that are an obstacle to hearing Jesus is King as a ‘devotional’ ‘gospel’ recording.

.@kanyewest.
Jesus is King Album and Film Experience.
Live at the Forum.

And for many his association with conservative evangelical Christianity of the US power elite will be an issue.

Back in the cinema, the audience – baffled, disappointed, spellbound, uplifted – watched unfolding images of mountains beneath clouds, dandelion seeds blowing in the wind, the amazing architecture of the Roden Crater.

Shadowy images of people, with occasional glimpses of Kanye West, mostly from the back: an image of a humble presence.

The exuberant, joyful choir provide most of the music, relatively little of which relates to the album; there is passion and surprise, and jolting moments of awe.

Who knows where faith will lead Kanye West, and whether great work will emerge as a result.

For now we can (maybe) look forward to an album drawn from the Sunday Service celebrations, Jesus is Born, released (perhaps) on Christmas Day.