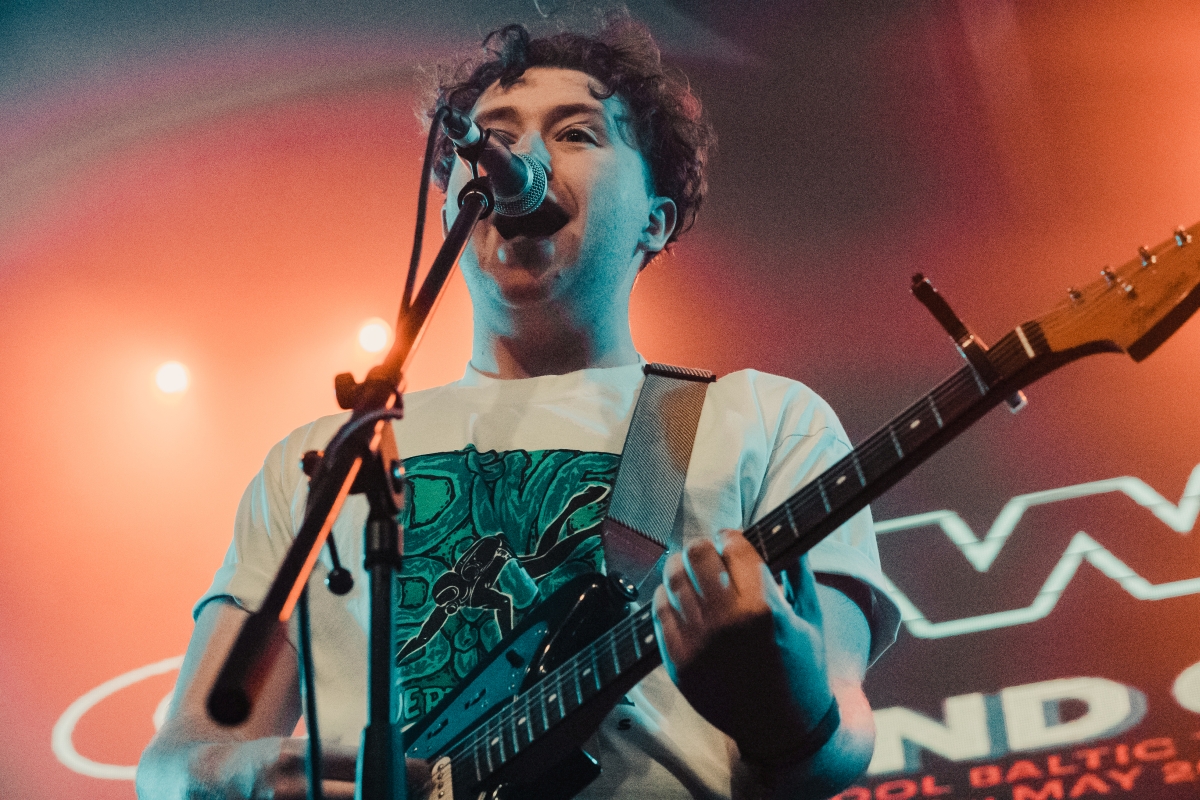 Vistas bring their jangly Scottish pop tunes to Sound on a sweaty Saturday night, Getintothis’ Steven Doherty admires the secret of their success.

Vistas are no strangers around these parts, having played the last few Sound Cities, including a barnstorming Hangar 34 set this year in front of a rabid packed house.

Tonight they are in cosier surroundings at Sound, for a gig that was sold out 3 months ago, which takes some doing these days, and all this before releasing their debut album.

They come equipped with a self-confident swagger, and a decent wall of noise, seemingly unbecoming in the majority of the Radio X friendly kind of new young band, although they could do with losing the cheesy front of stage guitar solos.

There are whiffs of Ash, Shed 7 and even Boy-era U2, all of which is meant complimentarily.

They should also lose the habit of calling us Liverpool after every song, not all of us love the word.

And either I’m bad at Googling, or they seem to have no Facebook or Twitter, the promising young fools.

Vistas enter the stage to Erasure’s A Little Respect, a masterstroke on their part, as the crowd go wild, even though most of them weren’t born for its 1989 release.

Tonight could be something of an anti-climax for them. Last night they were playing a massive Edinburgh hometown gig and there is even an initial subdued feeling from both crowd and band.

It’s as if both parties are sizing each other up to try and gauge how their Saturday nights are going to turn out.

It’s not long till they hit their stride on Hold Me, but then there’s the dreaded “here’s a new song” announcement that usually kills the mood, however, 15 Years is a corker and the crowd lap it up, and the pace doesn’t drop for the rest of the evening.

By the time the seemingly harmless Fratellis-esque Like An American rolls around, half the venue has formed itself into some sort of a mosh pit, with next month’s new single Teenage Blues going down equally as well as the old stuff.

There’s not much in the way of actual, old-fashioned stage presence, but Vistas have a few other tricks up their collective sleeves.

They very skillfully pull off the balancing act of having a set full of quite similar songs, but each one has just the right riff or hook that just keeps them different enough, with a killer chorus to boot.

Which is plenty these days, hell its enough to headline Glastonbury.

The Killers Theory, as it should be called.

Like all good sets, it saves the true diamonds till the end, and the run of the last four or five songs tonight is as good an ending as you’ll see these days from a band prior to their debut long-player, with each one received like their very own Mr.Brightside.

Retrospect shows that when the youth aren’t loudly chatting amongst themselves, they can still properly lose their mind to the songs that they love.

And God bless them for that, us old-timers feed off that like a drug, similar to when pensioners sniff a newborn baby’s head.

Tigerblood ends proceedings in manic style, and we are left to reflect on one of those gigs that we’ll be glad to say we were at this time next year when they inevitably upgrade to playing the enormodomes.