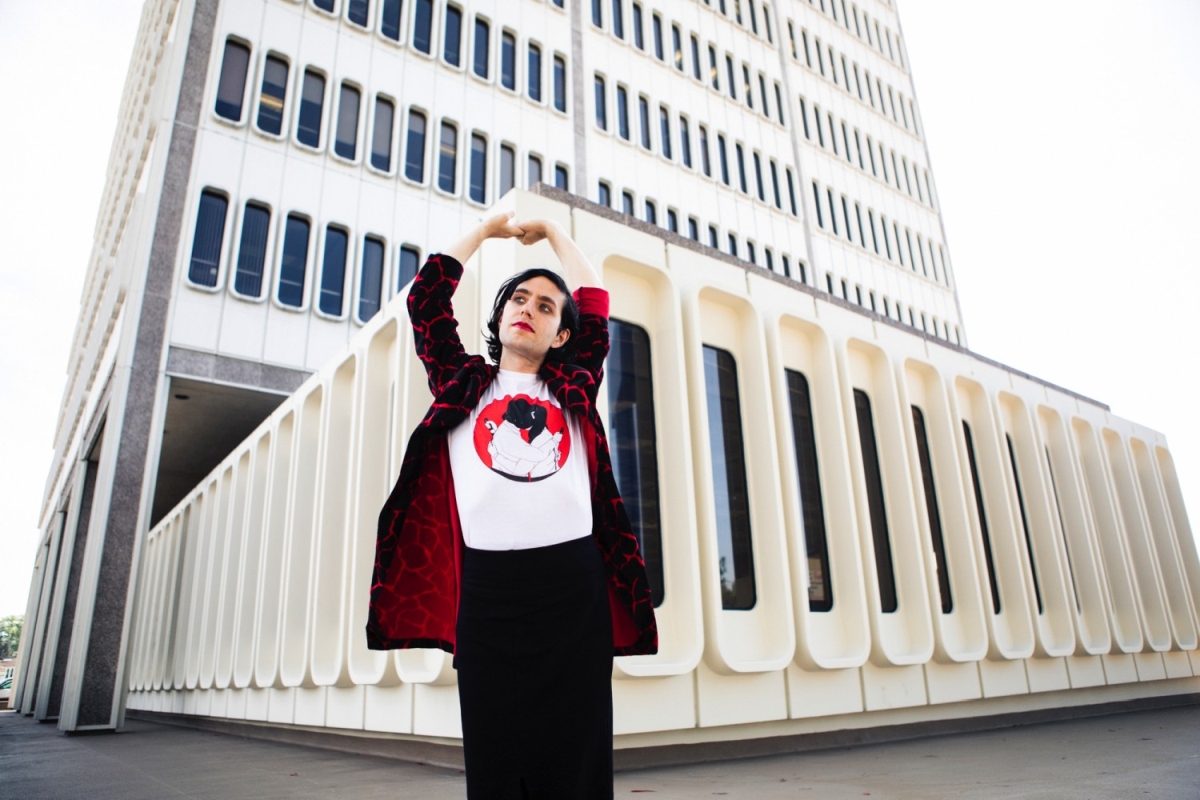 Ezra Furman had the Albert Hall audience transfixed, Getintothis’ Martin Hewitt was immersed in the experience.

Attempting to report from any Ezra Furman show by simply replaying (or re-writing) how events unfold is folly.

Plenty of people probably want to know what goes down when rock ’n roll’s most enigmatic enfant terrible steps up, but that’s almost missing the point.

The real genius is what stays after the experience ends.

Not that there isn’t enough to talk about.

Make up on and clad in typically standout gladrags — black candy-striped playsuit, eventually tearing down to trousers only — words such as “visceral” don’t do this breakneck performer justice.

Barely stopping to catch breath, tracks come thick, fast and furious, meaning when we land at a startlingly delicate interpretation of ‘Body Was Made’, ode to the elusive self-acceptance we all deserve, it’s as though a juggernaut just exited the building.

Less of an opportunity to regroup, the track is made more powerful than ever thanks to this live version’s sparse desolation. Nobody can look away.

‘Tip of a Match’ is another rousing and visually arresting moment, although for very different reasons.

Muscular, distorted and frenzied, its symbolism is particularly pronounced when yelled from a stage. Dive in and allow emotions to spill like blood from the gaping wound you’ve tried so hard to put a plaster over.

That key change release of euphoria indicative of the real message behind Furman’s work. The vulnerability of showing true feelings, however unattractive we think they are, is the only true catharsis in a society built on silence.

If there are any criticisms from yet another top drawer Manchester show for this open-armed saviour of humanity’s judged and ostracised it’s the venue itself.

Staggeringly beautiful and acoustically accomplished Albert Hall may be, you can’t help feel a little of the intensity is leaking through the high ceiling. Seen but not always fully felt.

‘Haunted Head’, dedicated to a lost friend, packs the kind of soul-searching, heartbroken and deeply personal atmosphere most artists can only hope to achieve. Yet that power would be tenfold in a closer-knit environment.

Nevertheless, it’s impossible not to be completely transfixed and engrossed throughout.

Fresh material such as ‘Evening Prayer’, rallying cry for this endangered world, and the frantic ‘My Teeth Hurt’ unify early adopters and new disciples alike, energy levels in the stratosphere.

As they are for ‘Maraschino-Red Dress $8.99 at Goodwill’.

Confirmation that Furman remains the most vital representative of all that has been dejected, rejected and damaged yet still survived, his near-90-minute sermon leaves us feeling stronger.

A reminder others are here, and they genuinely understand us.

Share. Twitter Facebook Google+ Pinterest LinkedIn Tumblr Email
Previous ArticleToxteth Day of the Dead, a walk through the history and tales of L8 with K2 Plant Hire
Next Article Shiiine On Festival 2019 review: best bands and what we learned from Butlins Minehead