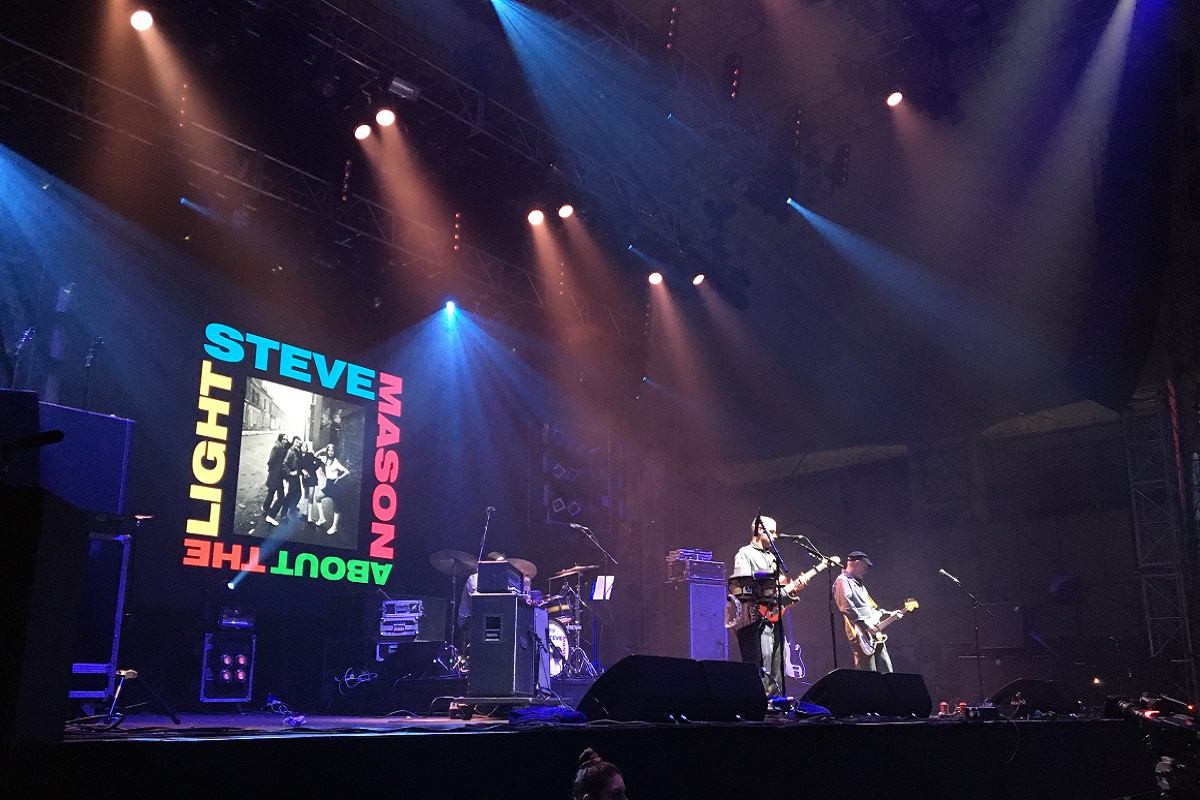 Shiiine On Festival proved to be something truly special as Getintothis’ Jules Reid discovered.

Arriving at Butlin’s Minehead resort on Friday afternoon, I checked into my apartment and had a nap. I was woken by a distant roar that signalled that Reverend & The Makers had done something pleasing to the crowd at The Skyline Arena.

I strolled over there and arrived just in time to see John Power and his bandmates waltz on stage.

For a few years now, Cast have been at the absolute top of their game. They are a better band today than they have ever been, resembling as they do, a classic ‘70s rock outfit who have earned their stripes on the road and in the studio.

Notwithstanding their superb musicianship, workhorse attitude and positive energy, the crowd seemed to be curiously subdued, a fact acknowledged by Power when he implored them to ‘Get this place fucking rocking…’ before launching into Sandstorm. With a superb back catalogue to build their setlists from, Cast are one of the best live bands in the country.

With their giant Jollification strawberry suspended above the stage, The Lightning Seeds experienced a variety of technical difficulties before settling down and delivering what everybody in attendance expected them to deliver.

The Broudie Bunch shrugged off the technical issues and brought matters to a triumphant close with Life of Riley, Pure and Three Lions before jetting off to play their first ever shows in the Land of the Rising Sun.

After The Skyline had closed, a couple of thousand people piled into the Centre Stage area to witness the return of former Boo Radleys frontman Sice.

After an absence from the stage of almost a decade, Sice has played a small handful of shows this year in advance of a soon to be announced UK tour and brand new material in 2020.

At Shiiine On he went for a crowd pleasing set consisting entirely of Boos’ songs, including nothing from his cult classic 1996 Creation Records solo offering First Fruits (released under the ‘Eggman’ moniker).

Opening with Find The Answer Within and closing with Wake Up, Boo!, Sice’s voice still has a depth, range and purity unmatched by the majority of his peers.

Not for the first time I mused on the belief that had Comb Your Hair been recorded by Oasis it would now be one of the most famous songs in the world.

The Finest Kiss, a pre-Creation hardcore fan favourite from the band’s Rough Trade days had one member of the audience in tears at the front of the stage.

Sice was followed by former Creation label-mates Swervedriver, the Oxfordshire grunge shoegazers enjoying something of a renaissance in the wake of their Future Ruins album, released earlier this year. 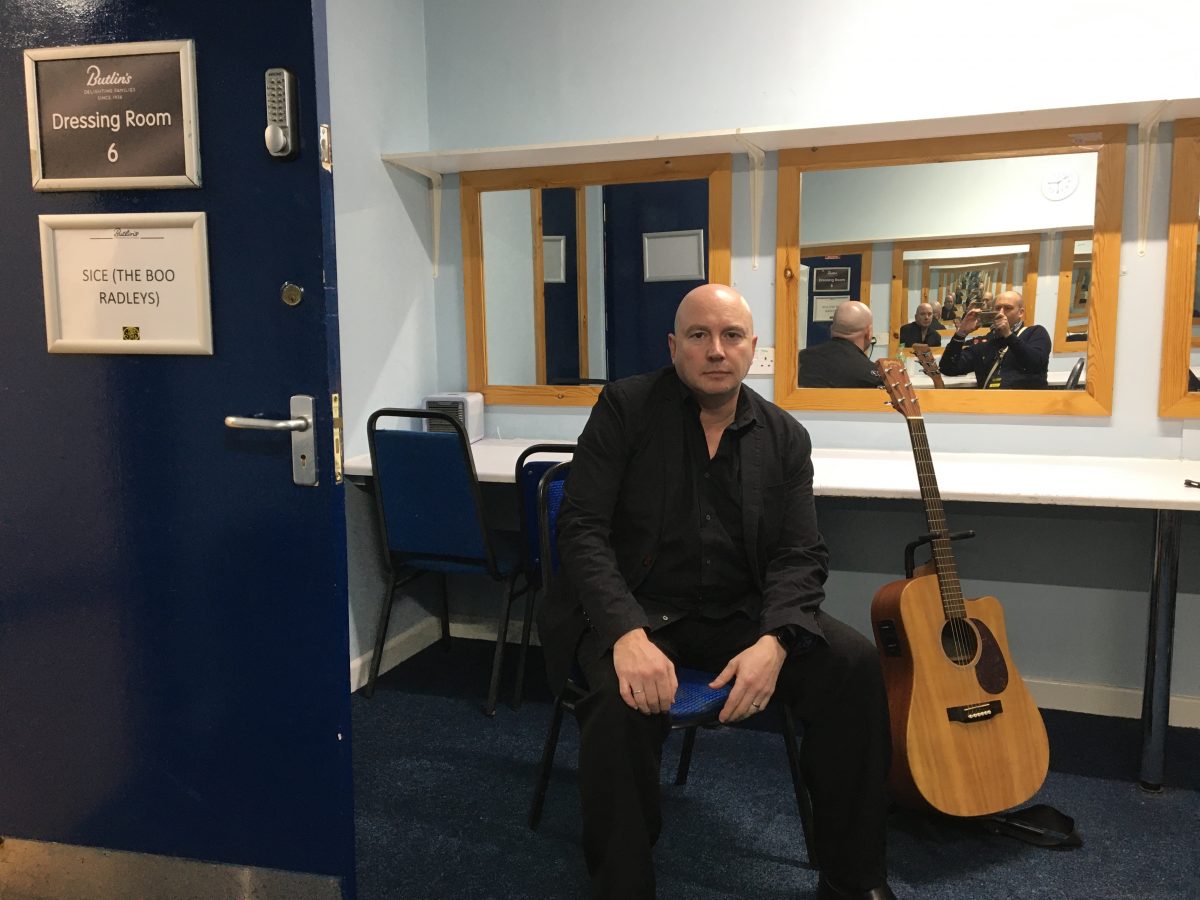 Atmospheric and loud, Swervedriver craft and layer perfect driving music and their live line-up now includes Supergrass bass player, Mick Quinn, as well as the largest collection of guitar pedals that I have ever seen.

25 years separate Duel, their most successful song and Mary Winter, one of the best offerings from Future Ruins – but both songs could easily have been drawn from the same period.

Steve Mason’s set on Saturday afternoon confirmed exactly why Shiiine On directors James O’Mullan and Steve Aston had been so relentless in their lengthy pursuit of the former Beta Band frontman; and his set served to highlight the unspoken, invisible line that separates the two kind of acts that participate in events like Shiiine On.

There are those who trade solely in nostalgia and are attempting to stir long lost feelings and memories (nothing wrong with that, of course) while there are those who seem to have been reborn anew for these tumultuous times.

Walking Away from Love and Dry The Rain were highlights of Mason’s tremendous set and the reception he received confirmed his status as one of the weekend’s big winners.

Idlewild and Embrace followed – but despite their arena friendly sound and songs, they seemed to lack sparkle and imagination after Steve Mason’s intervention. That being said, Embrace went down very well with the audience, no surprise given that Come Back to What You Know would work well as a Shiiine On tagline.

The Centre Stage was packed for Jim Bob’s performance.

The Carter USM frontman played an acoustic set comprising songs from the 30 Something album and the audience response was astonishing.

Crowd-surfing, moshing, stage diving – all for one man and his acoustic guitar. Highlights included a raucous version of The Inspiral Carpets’ indie anthem This is How it Feels and Carter tunes Sheriff Fatman and The Only Living Boy in New Cross. All in all, a truly magnificent performance; one of the best of the weekend.

Like a lot of people at Shiiine, I had been really looking forward to seeing Bob Mould.

As well as his work with Hüsker Dü, I had enjoyed his most recent album, Sunshine Rock – and his 1992 album Copper Blue is one of my favourite records.

But while the focus and intensity of his performance could not be doubted, the one man and an ear splittingly loud Fender Stratocaster performance started to grate after a few songs.

Even his performance of Sugar’s brilliant pop gem If I can’t change your mind suffered from an unnecessary injection of punk desecration.

Again, full marks for an energetic and credible punk rock performance – but it might have been worthwhile for Mould to consider what he was actually asking his audience to listen to. When his set finished I felt glad to have seen an American icon perform live – but also made a firm resolution to see him play with his band next time. 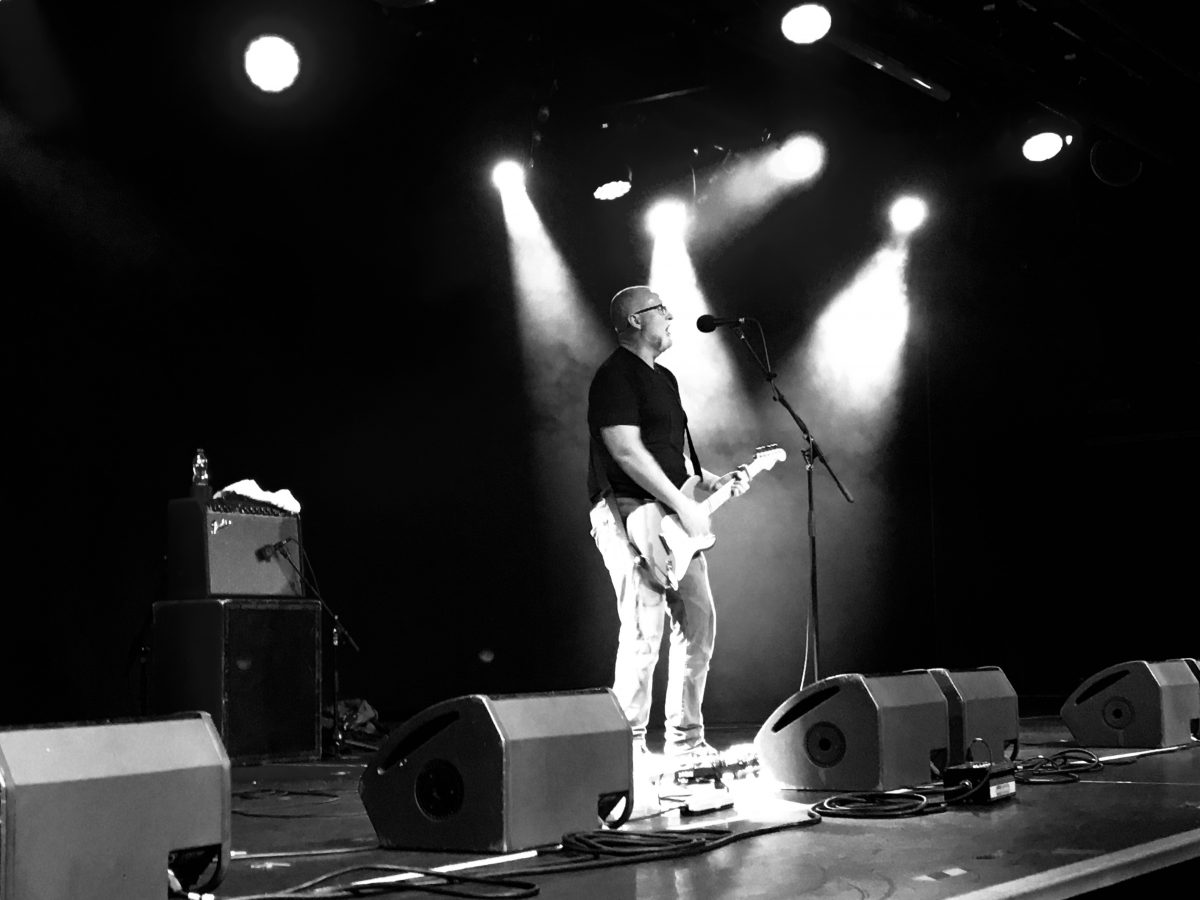 “My brother knows Karl Marx…” The thought of hearing (Dr) Niall O’Flaherty deliver the opening line of the classic Where’s Me Jumper? is what had sustained me (and about 800 others) in our mission to stay up until the early hours of the morning.

The Sultans of Ping were a revelation: glam punk, musically tight, funny, bitchy and entertaining.

Very entertaining. Imagine The Ramones fronted by an ice cold hybrid of Stewart Lee and Brett Anderson. The crowd were pogoing, the floor was shaking and chants of “SULTANS! SULTANS!” provoked the tongue-in-cheek ire of O’Flaherty: ‘You can just go ahead and cut that shit out. I don’t need your love. I don’t need it.”

It’s 2 a.m. and everyone is smiling after singing along to classics such as Veronica and Michiko (I still have the 12” single picture disc) and on my way back to the apartment I cross paths with Steve Lamacq, making his way to the DJ booth for his early, early morning set.

Steve Lamacq on Going Deaf For a Living: from Nirvana to Aphex Twin, Springsteen to The Lurkers

Several weeks ago, I had been eagerly awaiting a Scouse Sunday Afternoon Session featuring Edgar Jones, Matt McManamon, Pete Wilkinson and 16 Tambourines but unfortunately, one by one, three of the aforementioned acts pulled out of the festival, leaving only Matt McManamon to perform at The Inn on the Green pub venue.

The former Dead 60s frontman, accompanied by guitarist Vincent Redmond, showcased his two superb recent solo singles Seas of Gold and Sinking Sands, as well as crowd favourites Riot Radio, Stand Up and Beat Generation. He was followed by an acoustic Tony Wright from Terrorvision. 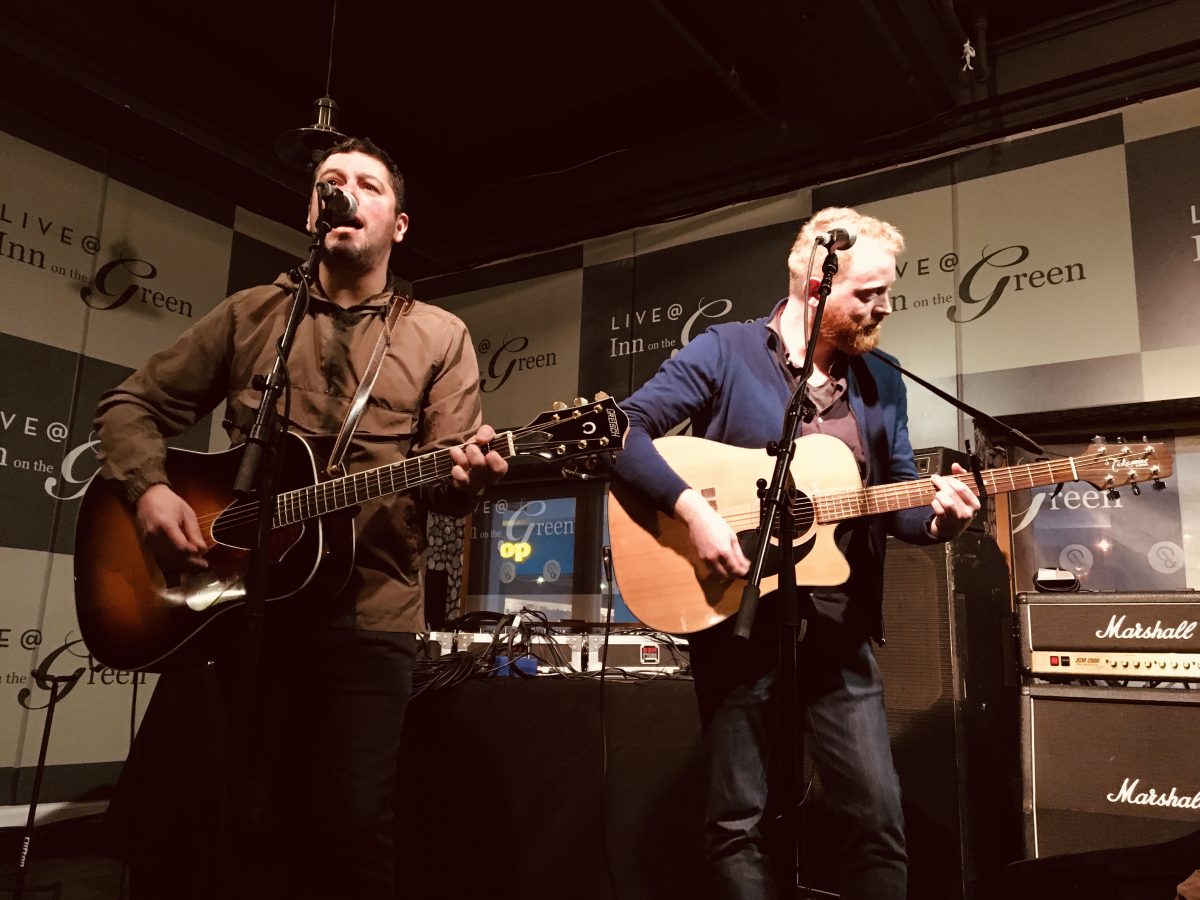 As evening approached the Skyline audience were taken back in time from before the dawn of Britpop to The Golden Age of Grebo with the quartet of Jesus Jones, Pop Will Eat Itself, Ned’s Atomic Dustbin and The Wonderstuff.

This line-up served to perfectly illustrate exactly why Shiiine On is the UK’s quintessential festival for members of Generation X: with the vast majority of the 6000 attendees having been born somewhere between 1960 and 1984, communal memories came flooding back of undercuts and army surplus clothing, Melody Maker front covers, bands who sold more t-shirts than records and Glastonbury and Reading tickets that cost less than fifty quid.

At this year’s Shiiine I counted no less than eight acts who had performed at either or both Reading Festivals in 1991 and 1992.

The Skyline closed for the final time and Centre Stage then reverberated to the sound of those perennial purveyors of good vibes, Dodgy.

The army of tired and happy Shiiiners needed no words to communicate their reply: “That attitude is still here, Peter, preserved for all time in amber at Butlin’s.”